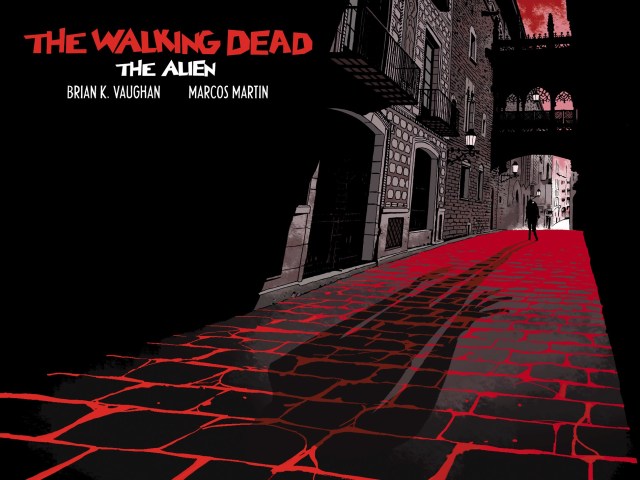 Have you wondered whether or not the zombie apocalypse affecting the United States in the world of The Walking Dead had an impact on the rest of the world? Well, in a 31-page one-shot comic over at PanelSyndicate, Brian K. Vaughan and his digital comic partner-in-crime Marcos Martin have added to the Walking Dead lore!

The issue is called The Walking Dead: Alien, and it moves the scope of the story away from the United States and over to Spain. Specifically, it moves the story to Barcelona, which is where Martin is from. This marks the first time that The Walking Dead comic has been written by anyone other than its creator, Robert Kirkman, and the first time anyone other than Tony Moore or Charlie Adlard has drawn the series. The Walking Dead: Alien started as a joke on Twitter between Kirkman and Vaughan, and ended up becoming a deal with Image Comics: Image got the print rights to Vaughan and Martin’s PanelSyndicate comic The Private Eye, and in exchange, Vaughan and Martin got to write an issue of The Walking Dead that was completely unique.

According to an interview with Comic Book Resources, Vaughan didn’t think that Kirkman would even go for his ridiculous pitch. He explains,

[Kirkman] said, “do whatever you want to do. If you want to do something with the existing cast or if you want to do something in the past, just pitch it to me.” It’s been eight years since I’d done work for hire. It’s always strange to write other people’s characters, so I wanted to go for a big swing but I also didn’t want to step on what Robert and Charlie are doing in the book. And I also wanted it to be story that if you don’t want to read it, you’re not going to miss out on anything, but also if it’s your very first “The Walking Dead” story, you’ll be able to understand it. I also wanted to do something away from the main cast. I didn’t think that I’d ever seen in the comic, Robert cut away from the States.

And in particular, because we have this global audience with Panel Syndicate, that was the first thing that I wanted to do. I wanted to take a look at somewhere else in the world. And with Marcos being born and raised in Barcelona, it seemed like a great opportunity to show us a scene of this universe that we haven’t seen before. […] So I thought, why don’t we just ask? I thought there was no way that Robert would say, yes to this story, so we sent him the pitch for “The Walking Dead: The Alien” and he read it and said he loved it, and “Full speed ahead.

The issue introduces two completely new characters, Claudia and Jeff, as they navigate zombified Barcelona, and it reveals a really big secret about The Walking Dead universe! Vaughan and Martin wanted to start with a completely clean slate, creating characters that you’d come to love and root for the way we have with characters like Rick and Michonne. Apparently, Jeff is about as useless as Yorick is in Y: The Last Man, whereas Claudia is more of a badass.

When describing Claudia, Vaughan says, “When we decided we were going to set the story in Barcelona, I was trying to think who would represent Barcelona, and this idea of a curator at war museum made sense. I liked the idea of a visual of a woman as a knight in shining armor going up against zombies. I’m not very well versed in zombie lore. I remember asking Robert, “Has this been done too often? Can we have someone who picks up an old suit of armor to go up against zombies?” And there was a pause before he said, “Ah, I wish I had thought of that.”

Check out this video interview over at Robert Kirkman’s Skybound YouTube channel to hear more about how the two came to bring us The Walking Dead: Alien:

And for the full interview with Vaughan and Martin, head over to Comic Book Resources. The Walking Dead: Alien is available right now and is totally DRM-free and pay-what-you-wish (including nothing! But come on. These guys worked hard!)

Get ready, because the world of The Walking Dead just got a lot bigger!