Valve | Defense Against The Ancients | DotA | Trademark | The Mary Sue 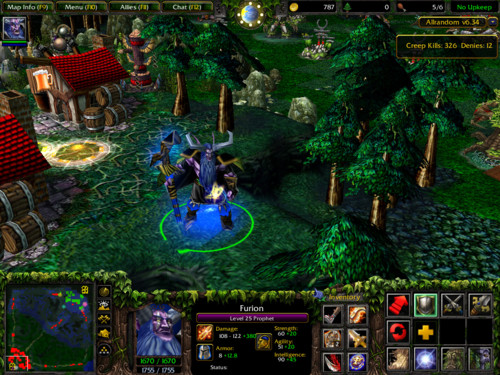 There are many people out there for whom the idea of more games like Defense of the Ancients (affectionately known as DotA) is very exciting, and so gamemaker Valve‘s announcement that it had acquired some of the developers of DotA so that they could do just that has been greeted optimistically.

The idea that one single company is taking control of the name of something that hundreds of people have contributed to is surprising. I believe DotA should always remain a community-owned product that modders, independent developers and game fans can continue to modify and play as often as they’d like. Guinsoo and I had hoped that the DotA name would live on in perpetuity as a community project that is both free to play and free to modify and expand.

What is DotA?  If it’s so popular, why isn’t the name already trademarked?  The answers are really quite interesting, and are rooted in unique aspects of the industry and culture of online PC gaming.

DotA is a mod for Warcraft III, heavily inspired by a mod for StarCraft, but updated and enhanced by some of Warcraft III‘s unique mechanics, namely hero units.  In a regular game of Warcraft III, you build an army and lead it, with your hero units, into battle against other armies.  Warcraft‘s hero units functioned effectively like a character in a more traditional roleplaying game: they gained experience and levels, new abilities, and could be equipped with items.

DotA stripped out most of the army building aspects of Warcraft.  Instead, a game of DotA was about leveling a single hero unit, and working in tandem with other online players to destroy the “Ancient” a building at the other corner of the map that was being guarded by other players, before they could destroy your own team’s Ancient.

DotA became a go to game for LAN parties, along side such venerable titles as StarCraft, Warcraft III itself, Doom and Quake.  Blizzard, the makers of Warcraft III, even featured a DotA tournament in their first official con. This would be impressive for any game, but DotA is a mod.  A modification to an existing game, with no development budget, no studio backing, and no guaranteed maintenance, supported entirely by a dedicated community.

That, in a nutshell, is why the name Defense of the Ancients has never been trademarked.  It’s never been an official game before.  League of Legends is essentially the same game, expanded and independent of Blizzard’s Warcraft III client, made by Riot Games to capitalize on the same community that made DotA a hit.

And even Riot Games is excited to see Valve (maker of Portal, Team Fortress 2, and Half-Life) take on such a historically popular kind of gameplay.  They just want them to pick a new name, like they did.

The PC gaming mod community is an incredibly interesting one, with many mod developers turning out fantastic improvements to existing games by some of the best gamemakers in the world… without much expectation of payment or recompense.  Usually when people say that it’s the community that really makes an online game, it’s a metaphor.  So, who owns the name of a game when the community made it in the first place?