Valerian and the City of a Thousand Planets in a Galaxy Far, Far Away …

When you think of metal bikinis, a space crusader getting frozen in a big ‘ol block, and a helmeted villain, the Star Wars “Imperial March” probably starts playing on your mental turntable. But everyone’s favorite space opera may have heavily borrowed from the original space opera comic that time forgot: Valérian and Laureline.

The french comic started in 1967 when Star Trek and Doctor Who were warping and materializing onto TV screens (and a decade before Star Wars). It follows two Spatio-Temporal agents in 2720, Valérian and Laureline, when most of humanity lives out their days in the utopian Earth city of Galaxity hooked up to “dream machines” while the agents defend the present, past, and universe from time-traveling ne’er-do-wells.

While the comic itself isn’t a household name, it saw a big screen adaptation this summer with Luc Besson’s Valerian and the City of a Thousand Planets (which, unfortunately, flopped onto its CGI-heavy butt and secured a certified rotten splat on the Tomatometer). But for all of its flaws, the movie has brought mainstream attention to the fact that this French comic may have inspired many scenes in “a galaxy far, far away …”

The comic’s artist, Jean-Claude Mézières, was quick to notice the similarities. “It looked like an adaptation of Valérian for the big screen,” he’s quoted saying after a 1977 screening of Star Wars at the International Science Fiction Festival in France. And the coincidences are stunning. In the 1971 The Empire of a Thousand Planets, Valérian gets frozen in a block of hard material … much like in The Empire Strikes Back, when Han Solo gets frozen in carbonite, with similarities down to the pose and comic titles. 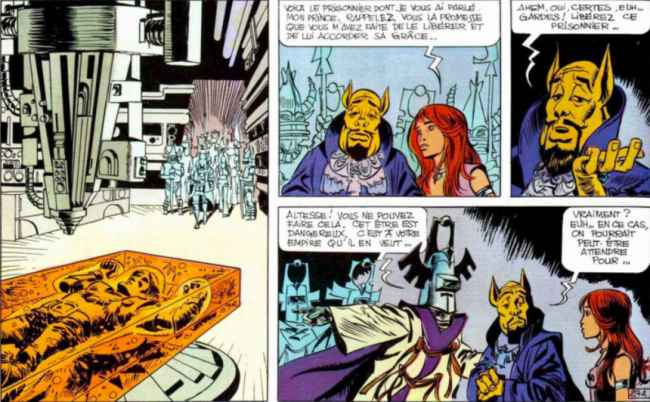 Or how about in the 1972 Valérian comic The Land Without Stars where Laureline is taken by a giant criminal emperor who makes her wear a metal bikini? 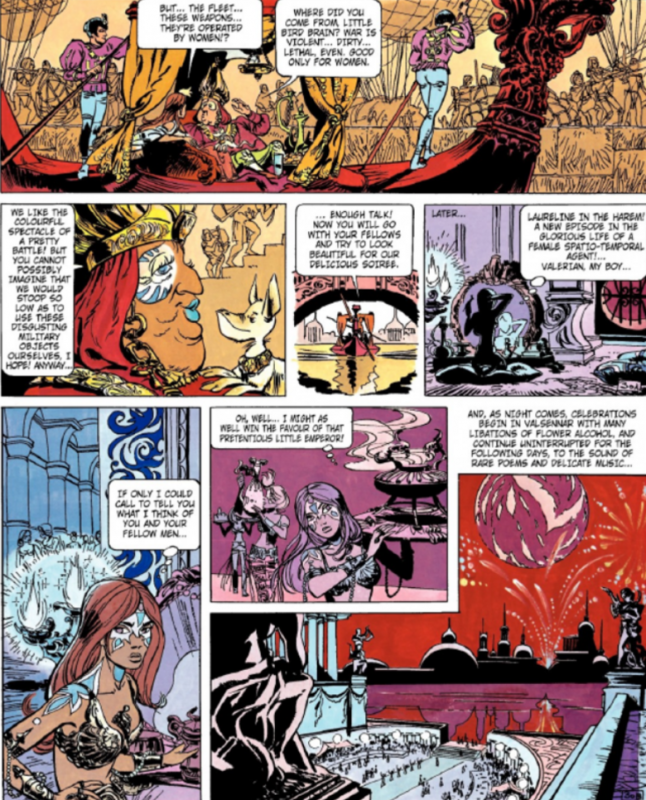 Even the ship in the comics and the Millennium Falcon look similar. Mézières even commented on these similarities with, fittingly, a comic:

Mézières’ sci-fi visuals for the Valérian comics served as inspiration for another favorite sci-fi movie as well (with credit), The Fifth Element. He worked alongside Besson as a concept artist on the film, which ended up bearing heavy similarities to Mézières’ art for the Valérian comics. Besson is very open about loving the comic, and talked to Mézières many times in the ‘90s about wanting to adapt Valerian and the City of a Thousand Planets but waiting for the technology; the 2017 movie was essentially his Avatar. 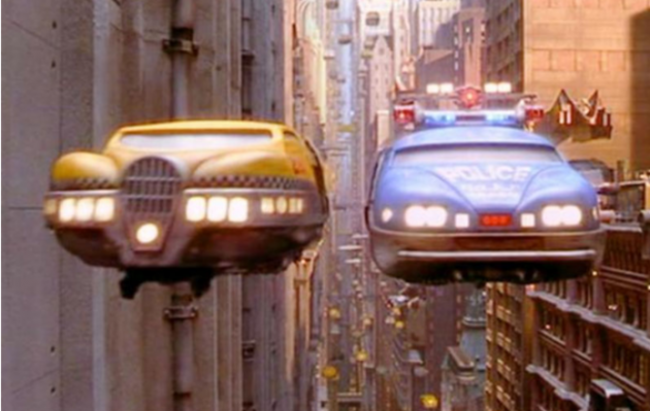 At the end of the day, the line between inspiration and stealing is dark and full of terrors (see what I did there?) Fans of Mass Effect also saw similarities between the game and the comic story in Valerian and Laureline. But Star Wars is far from the first great sci-fi and fantasy franchise to bear striking similarities to previous works.

For example, what does a three-part story about an all-corrupting ring of power, a wise old man with a magical staff, an evil fiery villain, and a world of dwarves and giants bring to mind? Tolkien’s Lord of the Rings, right? But that description could easily be subbed in for Wagner’s 1874 operatic epic, Der Ring des Nibelungen or, in English, The Ring of the Nibelung (which is like a Scandinavian dwarf.) Which, in itself, took heavy inspiration from the Norse/Germanic legend Nibelungenlied—or, “The Song of the Dwarves.” Tolkien has denied any inspiration, saying “Both rings were round, and there the resemblance ceased.” But according to the New Yorker, Tolkien made an informal study of the second part of Wagner’s opera, Die Walkure, shortly before he wrote The Lord of the Rings.

Considering that Mézières’ claims that an American friend of his confirmed that the Phantom Menace chief-decorator Doug Chiang had Valerian comics in his personal library and that George Lucas had a love of comic books and comic art, it’s hard to look at the similarities between Valérian and Laureline and all of the Star Wars films as sheer coincidence. But regardless of what you believe or what actually went down, one thing is certain: Valérian and Laureline is finally getting the recognition it deserves for being an influential sci-fi comic. And I think that’s something to be celebrated.

Other sources for background info on the comic include: io9, Force Material, Popular Mechanics, IGN, and Polygon.

Carlyn Hill is a content manager and writer at Threadless by day, contributor for HelloGiggles and podcaster by night. Just like Batman. When she’s not writing or drawing, you can find her in her mismatched socks and hanging out with her boyfriend, Netflix. Twitter: Chillyn555. Medium: @hiyeshello.

contributorStar Wars (franchise)ValerianValerian and the City of a Thousand Planets