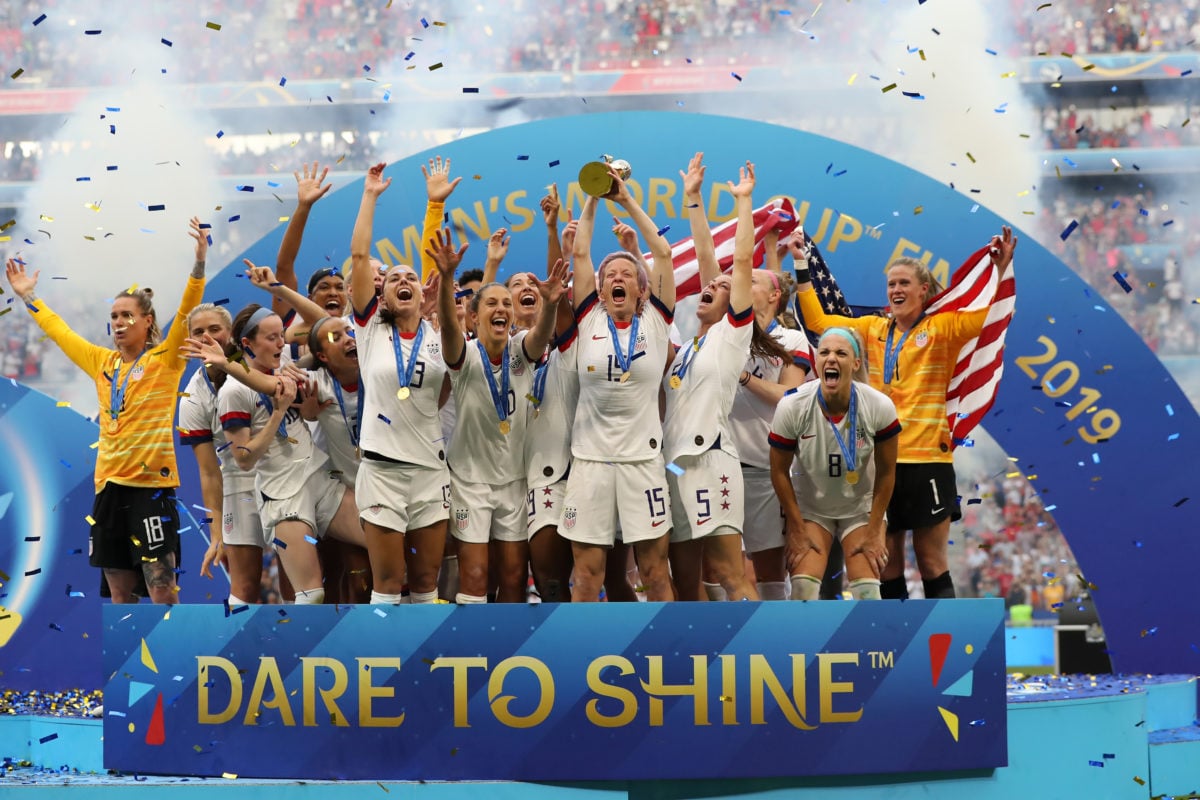 Now here’s something to feel patriotic about: the USWNT have won the 2019 Women’s World Cup after beating the Netherlands 2-0. The championship game at the Stade de Lyon in France marked the team’s second consecutive World Cup win and their 12th consecutive win in World Cup games.

Neither team scored in the first half, but the second half saw team captain Megan Rapinoe score in a penalty shot. She was followed by a spectacular score from Rose Lavelle, clinching the win for Team USA.

In addition to dominating the game (and the headlines) throughout this World Cup, Rapinoe took home the Golden Boot award, which goes to the top scorer. Silver Boot went to teammate Alex Morgan. Rapinoe also took home the Golden Ball, with England’s Lucy Bronze winning the Silver and Rose Lavelle taking the Bronze. Netherlands goalkeeper Sari Van Veenendaal was awarded the Golden Glove, which was well deserved for her terrific performance today.

Ain't really trip on the credit, I just paid all of my dues I just respected the game, now my name all in the news Trippin' on all of my moves, quote me on this, got a lot more to prove- @nipseyhussle #tmc🏁 #cheesin

It’s been a truly iconic Women’s World Cup for the U.S. team, but for Rapinoe in particular. At 34, this may well be her last World Cup, and after the way she played throughout this tournament, there is no better swan song. And given their epic performance, the world is wondering when women’s teams will finally see equal pay. FIFA President Gianni Infantino was met with chants for “equal pay” as he took the field:

After all, the trophies speak for themselves:

There have been eight total Women's World Cups. Here's how @USWNT has performed in each of them:

Tell me again why the U.S. Women's National Team is paid less?#USAvNED

Congratulations to the USWNT for their incredible game play and decisive victory. Now we’re off to not care about sports for another four years!

lmao @FoxNews just went live from a bar in France after the #USWNT win and people started shouting "Fuck Trump" on air😂😂 pic.twitter.com/EFstJx43BV

This team wins. Everyone wins.

Victory is when we all win. It's only crazy until you do it. #justdoit @USWNT pic.twitter.com/pBU7UE2IEs

How is your Sunday Funday going, Sue Believers?