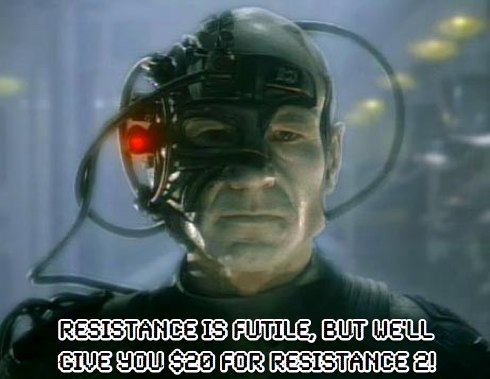 The bigger problem on consoles now is the trading in of games… I understand why players do this, games are expensive and after a few weeks of playing you’ve either beaten it, or got bored of it so trading it back in to help pay for the next seems sensible when people are short of cash.

Oliver said that the average used game is traded up to four times, which quarters the amount of profit going to the developer.

Of course, some game makers are already responding to this industry trend.  EA, for example, is now including a key with all of their online sports games (yearly releases that don’t have much replayability, i.e., ripe for the reselling).  Players must input the key to gain access to online play, and after that the key is useless.  Players buying the game pre-owned can still play online, but they’ll have to buy their access key for $10.

As the slow march towards digital distribution competes more and more with brick and mortar stores, used game sales will also drop, since it’s kind of hard to sell a used copy of, uh.  The install file?  Just goes to show that used game selling is entirely profitable for the retail outlet, not the maker of the game.

But back to the title of the article.  If used game sales are really worse than piracy, you’d think the game industry wouldn’t be inconveniencing it’s honest player base with its anti-piracy measures so often.

Oliver may be right, but after looking at Blitz Games’ library, we can’t help but wonder exactly how many people are pirating Barbie Horse Adventures: Wild Horse Rescue and Bratz Girlz Really Rock.

(via That VideoGame Blog.)