This USB Stick is a Dual-Core Computer 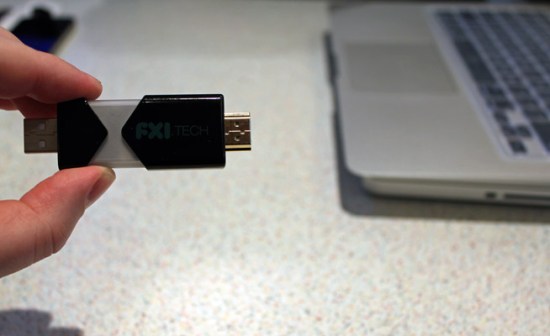 Meet the Cotton Candy: FXI technologies’ USB stick-size portable computer prototype with a dual-core 1.2-GHz Samsung Exynos ARM CPU. That’s the same processor in a Samsung Galaxy S II, by the way. Also, it has 802.11n Wi-Fi capability, Bluetooth, HDMI-out and a microSD memory slot. Yeah. This little guy packs a punch. The device is designed for what’s being called “any screen computing” meaning that when you plug this bad boy into a screen, it can turn it into a Android workstation on the spot. We’re talking pretty much any screen too. TV, laptop, tablet, phone, any of them will work. So why’s this beefy little dude called Cotton Candy? That’s how much it weighs.

If you plug Cotton Candy into a Mac or PC and the operating system will recognize the drive as a device and then, when you boot it up, you can actually run the Android workstation in a window on top of your normal OS, and even transfer files back and forth between the two. If you attach it to a TV or other manner of dumbscreen, Cotton Candy can use its Bluetooth to pick up whatever device you want to use to control it, after which you can use it to stream video or whatever else your little heart desires.

Cotton Candy isn’t aiming to replace the personal computer or anything, instead, it’s trying to play a support role, and perhaps become the king of secondary devices. After all, you don’t really want a primary device that doesn’t have a screen, or like, an input device. Besides, there won’t be any sort of consumer model any time soon. The plan for the time being is to sell the device to developers and license the technology in hopes that it might turn into something with a wide variety of consumer applications.

FXI also feels like they have plenty of room to grow with this device. At the moment, Cotton Candy runs Android 2.3, but it should be able to run Ubuntu, as well as versions of Windows 8. There’s also talk that it could work on tablets and phones as well, meaning that you could pretty easily get yourself an iPhone or iPad running Android, if that’s what you’re into.

Given that this is only a prototype and consumer models aren’t at the top of the todo list, it’s not surprising that there’s not an official price, but FXI expects it to come in at significantly less than $200. Granted, that’s not exactly Raspberry Pi territory, but it’d still be pretty cheap for what is essentially a fully functioning computer, and one that seems like it’d be pretty capable. When it comes to ultra-portable computing, it looks like Raspberry Pi and Cotton Candy are the big ones on the table so far, but I’m excited to see what might come next. Maybe some ice cream or something. Mint MicroChip anyone?