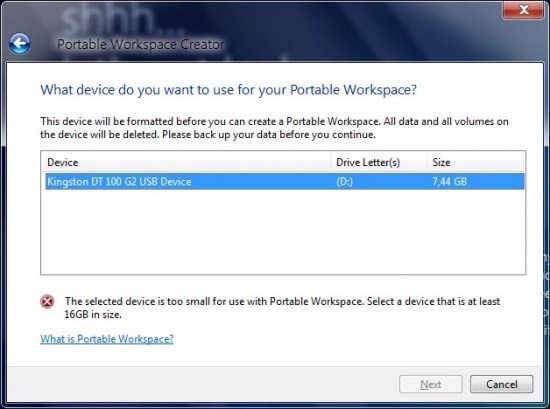 A leaked version of Microsoft’s forthcoming Windows 8 operating system seems to show that users will be able to create working copies of Windows on flash devices through the “portable workspaces” feature. The feature first appeared in build 7850.0.winmain_win8m1.100922-1508 of the operating system, and may appear in the final version.

With a portable version, users could carry important data on their person assured that it would be fully accessible regardless of which computer they used. Moreover, IT professionals could also use bootable versions of the operating system to help repair and revive non-functioning computers. Since this feature appears in a leaked version of the operating system, there is no details about the limits that could be placed on the portable workspaces, such as longevity or number of copies.

Users of open source operating systems like Linux are likely already familiar with the concept. Ubuntu for instance has been distributing their operating system through bootable USB sticks for many years, and portable versions of popular applications like Firefox have also been available. Were Microsoft to adopt such a capability, it could be  taken as a signal of the sway open source creators are having over mainstream companies.

It would also give Windows users a greater degree of freedom, being able to create what are essentially usable copies of the operating system. Though Microsoft has seemed rather draconian as of late, the inclusion of new and challenging features like this could be a big win for consumers and perhaps restore a forward-thinking atmosphere at the software giant.