USA and Canada Come Together To Mock Their Respective Olympics Uniforms

Global unity achieved through memes? Honestly why not. 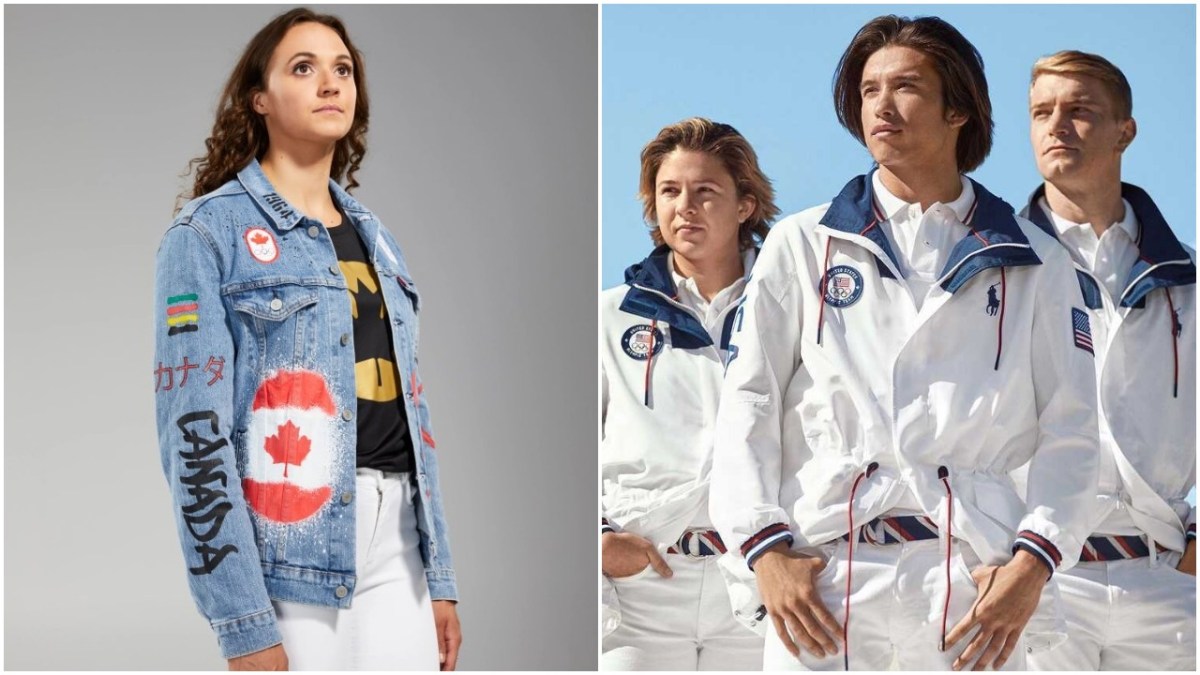 The Tokyo 2020 Summer Olympics was, like so many events last year, delayed by the COVID-19 pandemic. Now, plans are moving forward for the international multi-sport event to take place in July and August of this year. And with the games just weeks away, it’s time for my favorite part of the Olympics: the ceremonial uniforms.

Granted, I am not much of a sports fan, but I do love checking out the latest fashions for the opening and closing ceremonies of the Olympics. These outfits have to thread the needle between being fashionable, inoffensive, and above all patriotic. They have to embody their country’s culture, while avoiding making the athletes look like walking flag mascots.

But while the Olympics is known for many things, subtlety isn’t one of them. Case in point: Canada’s entry of a jean jacket with a spray-painted version of their maple leaf flag upon it. I would like to imagine that this is an ironic play on the Canadian tuxedo, i.e. denim jacket on denim pants. Not to be outdone, America has debuted their Ralph Lauren looks, which resemble something an 80s movie villain would wear. I can just picture Billy Zabka wearing this white-on-white ensemble while giving a nerd a wedgie.

Why, when every olympics rolls around, do Canadian and American Olympic uniform designers decide to have a gownie-townie war?

There is something deeply funny about dressing the fittest folks on the planet in the least flattering looks possible. In the spirit of global unity, both Canadians and Americans have come together to mock their respective uniforms on social media. The results are, predictably, hilarious.

This photo of the USA Olympic team’s closing ceremony uniforms looks like an ad for “my dad’s got a place and a sick boat in Jackson Hole.” pic.twitter.com/DR2aEnm0zR

Canada, I asked you not to embarrass me while I was away. pic.twitter.com/f0ikeEMCvp

This photo of the USA Olympic closing ceremony uniforms looks like an ad for bullying. pic.twitter.com/viMKtL6Bg2

Let’s go to a live look at the reveal of Canada’s Olympic uniforms modelled by a Canadian pop icon: pic.twitter.com/ksXjyFsV7Z

This is ridiculous, Canadians can’t just take their formalwear and call it an “Olympics uniform” https://t.co/2G83dYdDoa

This is the gang that comes after you if you say you tried watching Schitt’s Creek but couldn’t get into it pic.twitter.com/SCHpf0QOwE

Ah so it’s Canadian Tuxedo vs Evil Kids from the Yacht Club https://t.co/XOddAAWV3G

Strong “do you know who my dad is???” energy from Team USA at this year’s Olympics https://t.co/iKGAVBEX3h

Canada & the US looking like the hero and the prep school villain of every 80’s, 90’s film. https://t.co/MGmK7PW5Qx via @CNNStyle

The 2021 Tokyo Olympics US Uniforms say, “No matter what happens, Buffy, we have the yachting medal in the bag.” pic.twitter.com/Z2WCmEwMZZ

Honestly the more I look at the Canadian Olympic uniforms the more I like them. Canada is going to roll up to the ceremonies like Travis in Clueless. After postponing & the year we have all had, why not?!?

Although I don’t think it’s possible to top Canada’s uniforms for the 1988 Calgary Olympics:

Let the games begin, I guess.

What do you think of the Olympic uniforms? Would you wear the Team Canada denim jacket?