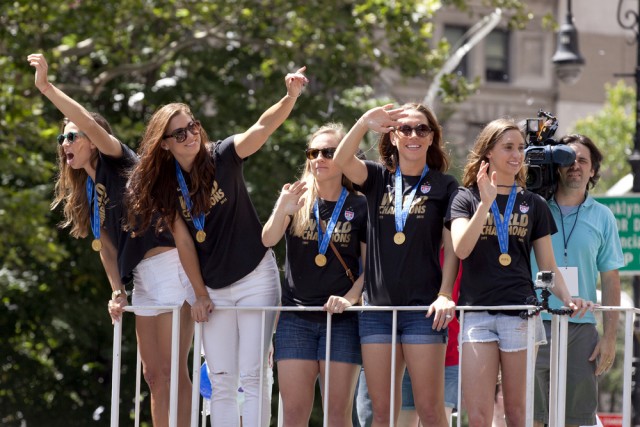 On Wednesday, five prominent members of the U.S. women’s soccer team filed a federal complaint accusing U.S. Soccer of wage discrimination. Despite generating nearly $20 million more in revenue last year than the U.S. men’s soccer, and winning with far more consistency than the men’s team, players on the U.S. women’s team earn as little as 40% of what the male players make.

The complaint was submitted by goalkeeper Hope Solo as well as Carli Lloyd, Becky Sauerbrunn, Alex Morgan, and Megan Rapinoe. In a statement released by team lawyer Jeffrey Kessler, Solo explained “The numbers speak for themselves. We are the best in the world, have three World Cup championships, four Olympic championships.” She went on to say that male players “get paid more to just show up than we get paid to win major championships.”

Kessler, who says this is “the strongest case of discrimination against women athletes in violation of law that I have ever seen,” also offered some background on the ongoing legal dispute between U.S. Soccer and the women’s team:

In early January, the Women’s National Team Players Association submitted a reasonable proposal for a new CBA [Collective Bargaining Agreement] that had equal pay for equal work as its guiding principle. U.S. Soccer responded by suing the players in an effort to keep in place the discriminatory and unfair treatment they have endured for years.

The U.S. men’s team hasn’t placed at a major event since 2002, when they made it to the quarterfinals at the World Cup, but U.S. Soccer argues that the pay discrepancy between the decorated women’s team and the comparatively mediocre men’s team is due in part to the latter’s high attendance numbers. The New York Times explains,

U.S. Soccer officials pushed back forcefully on the players’ claims in a conference call Thursday night, citing figures that the federation said showed the men’s national team produced revenue and attendance about double that of the women’s team, and television ratings that were “a multiple” of what the women attract, according to Sunil Gulati, the U.S. Soccer president. A federation spokesman, Neil Buethe, called some of the revenue figures in the players’ complaint “inaccurate, misleading or both.”

Players on the women’s team are salaried (the Times estimates that the team’s stars make around $72,000 a year), while players on the men’s team are only paid if they are called to the national team. Still, Solo and the other women argue that the way the league’s bonus structure works is unfair. Via ESPN:

Russell Sauer, outside counsel for the U.S. Soccer federation during labor talks, says of the complaint “The truth is, the players are claiming discrimination based on a more conservative structure, based on guaranteed compensation rather than pay to play, which they themselves requested, negotiated and approved of not once, but twice.”

Sauer also points out that the women’s contract includes benefits, such as severance and injury pay, not available to the male players. However, since the complaint was filed on Wednesday, the women’s team has received vocal support from their male peers, including goalie Tim Howard, who said his team supports the women in their efforts:

We support the fact that the women should fight for their rights and fight for what they think is just compensation. We, on the men’s side, have been fighting that battle for a long, long time. We certainly know what it feels like. We felt underpaid for a long time. We had to negotiate our way to a settlement.

ESPN reports that U.S. Soccer President Suni Gulati said during the Thursday night conference call, “We think very highly of the women’s national team and we want to compensate them fairly, and we’ll sit down and work through that with them when all of this settles down.”

(via Jezebel and ESPN, image via Aneese / Shutterstock.com)