U.S. Senate May Soon Have Record-Breaking Number of Female Senators 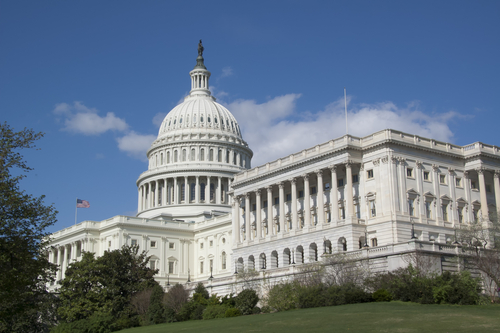 While we currently have more women in the U.S. Senate than we ever have before (20 whole women!), there’s clearly room for improvement. Thankfully, the trajectory for women in the Senate seems to be moving continually higher, and after the upcoming elections in November, it’s possible that women will be making even more history.

As reported by The Slot, there are currently six women running for senate seats in November, most of them in swing states where, if they win, they would be responsible for bringing back a Democratic majority. If only two of them win their races, we’ll have more women in the Senate than we’ve ever had before with 21. If all six win their races, which is unlikely (but a girl can dream!), that would bring the percentage of women in the Senate to 25%!

It would be the first time in history when a full quarter of the Senate was made up of women, and would be a huge deal. So, who are the women you should be keeping an eye on?

What’s awesome is that women won’t only be making history in the Senate when it comes to numbers. Democrat Kamala Harris is running against Democrat Loretta Sanchez in a runoff election (it’s the first time that California hasn’t had a Republican running for Senate since 1914) that’s pretty rad, because either way, California’s retiring Senator, Barbara Boxer, will be succeeded by a woman of color no matter what. If Harris wins (and she is the party favorite), she will be only the second black woman ever elected to the U.S. Senate. If Sanchez wins, she will be the first Latina elected to the Senate.

Believe it or not, we have Trump to thank for all this. As Trump’s rhetoric has become more inflammatory, hateful, and downright befuddling, the popularity of Republican candidates who expressed support of him is dying, along with Trump’s chances at the Presidency. However, the support of Emily’s List, an organization that works to elect Democratic, pro-choice women to office, can also be credited with these women having such a great shot at making history.

All this, and a possible female President, too? Sign us up!