Update: Hello Kitty Isn't a Human, Either | The Mary Sue

I can't take much more of this. 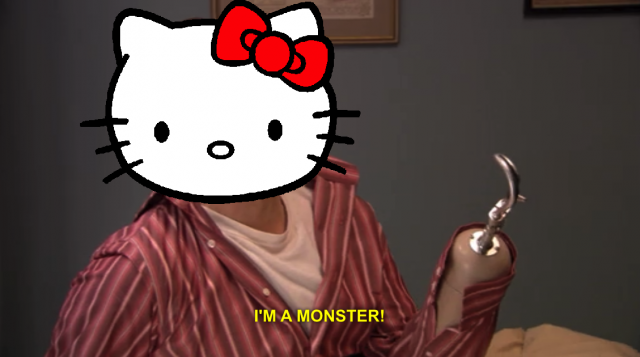 Yesterday the Internet (save for hardcore Sanrio fans—you’ll have to forgive the rest of us) flew into an existential frenzy as it was revealed by a Hello Kitty historian in a LA Times interview that the famous Sanrio character is not to be referred to as a cat. But then… what is she?

To get the truth, Rocketnews24 reporter Preston Phro reached out to the Japanese PR department of Sanrio. After what I presume must have been a five-minute long sigh punctured by an occasional “fucking gaijin,” the representative calmly explained: “We never said she was a human.” Oh. Okay. So she’s a monster, then.

According to Phro, the PR rep elaborated:

Hello Kitty is a 擬人化 (gijinka), a personification or anthropomorphization. Basically just like Micky Mouse, the Sanrio representative told me. No one would mistake the Disney character for a human–but at the same time he’s not quite a mouse. Just like Hello Kitty isn’t a human, she’s not quite a cat either.

Okay, no, I am calling shenanigans there. Mickey is a mouse. He is. It’s in his name, for chrissakes. Just because he can walk and talk and wear clothing and be friends with dogs while also owning dogs doesn’t mean you need to be pedantic about what species the guy represents.

Anyway, the reporter went on to ask about the other big controversy: whether or not Hello Kitty has a mouth. In a Time Magazine interview from 2008, Hello Kitty designer Yuko Yamaguchi remarked that the cat (shut up) is mouthless “so that people who look at her can project their own feelings onto her face, because she has an expressionless face. Kitty looks happy when people are happy. She looks sad when they are sad. For this psychological reason, we thought she shouldn’t be tied to any emotion – and that’s why she doesn’t have a mouth.”

But the official response from Sanrio? “We never said Hello Kitty doesn’t have a mouth. It’s just not drawn.”

Okay, well… they’re not wrong. After all, she’s plenty mouthy in the cartoon: 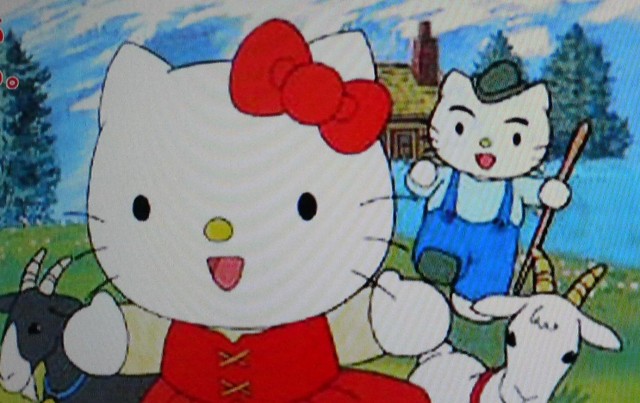 So how much of this do you think is poor English, and how much of it is Sanrio trying to get everyone’s attention just before Kitty’s 40th anniversary with the clever use calculated obfuscation? Either way, rest safe in the knowledge that unless you’re in marketing and you’re using her likeness on a product, you can ignore all these arbitrary classifications and interpret Hello Kitty however you’d prefer. Like this, for example: