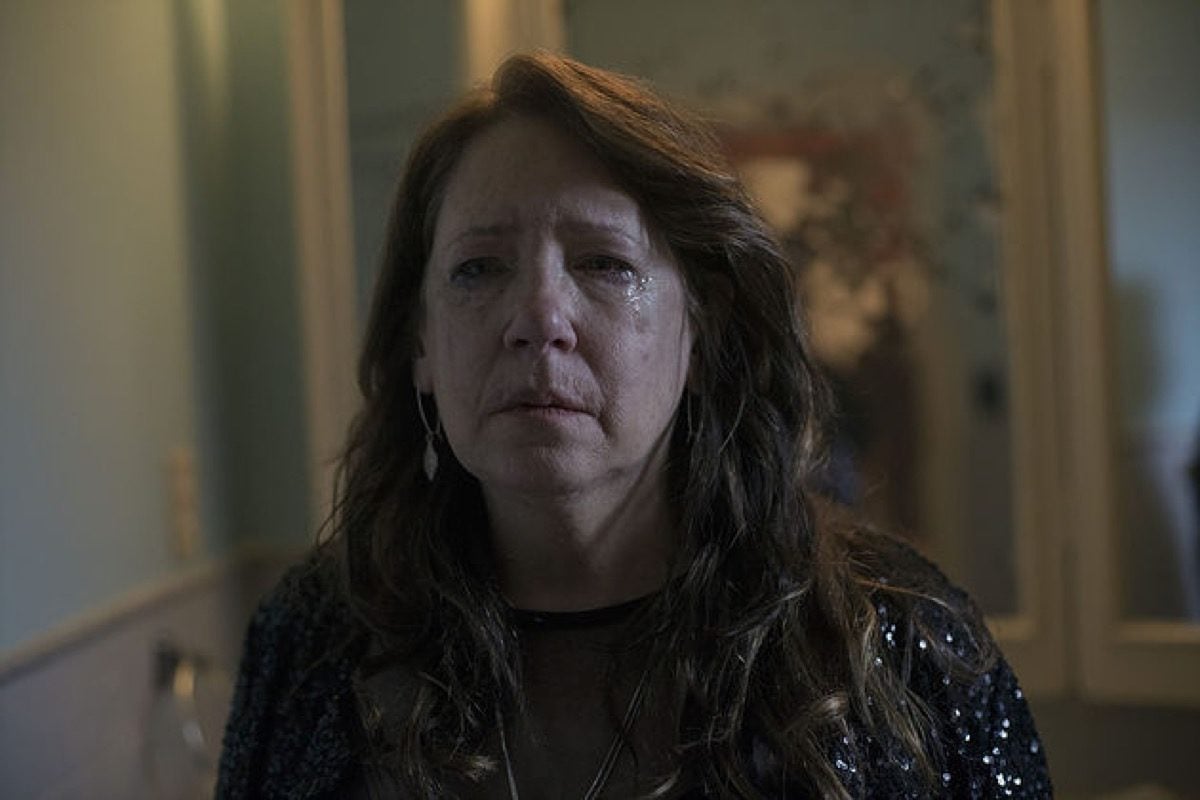 Although there was really no good reason for a third season of Hulu’s The Handmaid’s Tale (I tend to agree with those who thought the second season was excessive and exploitative), I’m so glad that I decided to check it out. Last week’s episode, “Unfit,” took a smart, startling, topical turn, exploring how the bullied become bullies and how many women, having internalized patriarchal contempt, can come to understand the subordination of other women as a means to survival.

The show has already done a great job of exploring some women’s complicity in patriarchy. Many of the more satisfying sequences involve Serena Joy realizing not only how the world she has helped to build is injurious to people she loves (including Nicole), but how it necessitates the stifling of her own creativity, intelligence, and full selfhood. Although she’s not arrived at complete self-recrimination, glimpses of Serena’s regret come close to scratching the itch many of us have: It feels good to see one’s political foes made aware of their mistakes. (And that’s an experience that seems increasingly unlikely that the over-65 million Hillary voters will ever get to enjoy in the real world.)

But “Unfit” goes further than simply exploring how being an architect of evil is bad for the oppressor’s soul (something Frederick Douglass, of course, pointed out over a century ago); it also dramatizes how horizontal violence, a concept articulated by Paolo Freire, can flourish in unjust systems. It dramatizes the turn inward—the ways in which the most vulnerable might surrender to institutionalized pathology and, rather than direct their rage at the oppressors, direct it at each other.

The primary plot concerns June’s revenge on Ofmatthew, a handmaid who is responsible for the death of Frances, the Martha who cared for June’s daughter, Hannah. More on this in a minute.

The second plot is Aunt Lydia’s backstory. Pre-Gilead, we discover, Lydia was an elementary school teacher. She isn’t unrecognizable from the Lydia we’ve come to know—religious, serious, and a bit self-righteous—but this younger Lydia also seems more compassionate. She apparently connects well with children, and she is, it would seem, a good teacher.

She develops a relationship with her student Ryan’s mother, a young woman named Noelle, who’s struggling, but doing her best, and whom Lydia encourages to do even “better.” In her scenes with Noelle, Lydia emerges as a potential mentor, source of support, and steadying influence for the younger woman. We know it won’t work out, but in those scenes, we get a glimpse of the kind of person Lydia might have been: an aunt in the truest sense of the word—a woman who uses her experience and wisdom and resources to help shepherd a more vulnerable woman through a difficult world.

However, after a good date ends badly—during a makeout session, Lydia gropes her date, the principal of her school, who pulls back and tells her that he feels this kind of contact is “too soon”—Lydia seems to inexplicably turn on Noelle, reporting her shortcomings as a mother and her “moral weakness” to social services, so that Ryan will be removed from Noelle’s custody.

The episode suggests that Lydia’s reversal is the result of her deep shame at having desired the principal. It isn’t simply that he has rejected her, although others have argued that the episode suggests that Lydia becomes a sadist because a guy didn’t like her. Instead, the principal is presented as an incredibly decent guy who is clear about his physical boundaries and who still seems to like Lydia, despite the grope.

The problem for Lydia is that she has revealed herself as a sexual being, a fraught category for many women, especially older women, and especially some unmarried, evangelical women. Then, this shame is compounded by the fact that the person she has humiliated herself in front of is not just a Christian or a man; he is also her boss.

Lydia’s shame manifests not as rage against the systems that oppress her or against the man who has power over her, but instead is projected onto the Noelle, whose lack of shame Lydia construes as a problem in need of correction. She identifies Noelle as “unfit” to mother.

This horizontal violence is consistent with what we have come to know about Lydia. What’s surprising and compelling, however, is that in this episode, June, our erstwhile hero, takes a page from Aunt Lydia’s playbook.

While Ofmatthew is certainly culpable for Frances’ death, and while she is certainly obnoxious—smug and self-righteous—she is also a victim of a repressive patriarchy that has institutionalized her rape and keeps taking her babies away from her. It’s significant that Ofmatthew, who feels more ambivalence about this pregnancy than her previous ones, is having a girl this time.

Enraged by Frances’ death, June seems incapable of compassion for Ofmatthew, and she first physically attacks her and then mounts a bullying campaign against her, getting the other handmaids to shun and torment her. One, for example, offers Ofmatthew a glass of water, only to spit in it when Ofmatthew reaches for it.

Then, when Lydia effectively makes June feel badly about Frances’ death (suggesting that it was really June’s fault, and that now June has deprived Hannah of Frances’ love), June lashes out even more venomously. She uses an earlier confidence to implicate Ofmatthew as unnatural and ungrateful, as that most monstrous of creatures in Gilead (and, increasingly, the real U.S.): a woman who “doesn’t want her baby.”

Led by Aunt Lydia, the other handmaids taunt Ofmatthew, pointing and chanting “sinner” and “crybaby.” Ofmatthew subsequently breaks down in a supermarket and is shot by a guardian. This sequence is graphically violent and disturbing, particularly as June stares, head held high, unfazed and perhaps not displeased with the outcome. She has made Ofmatthew sorry. She has made Ofmatthew pay. 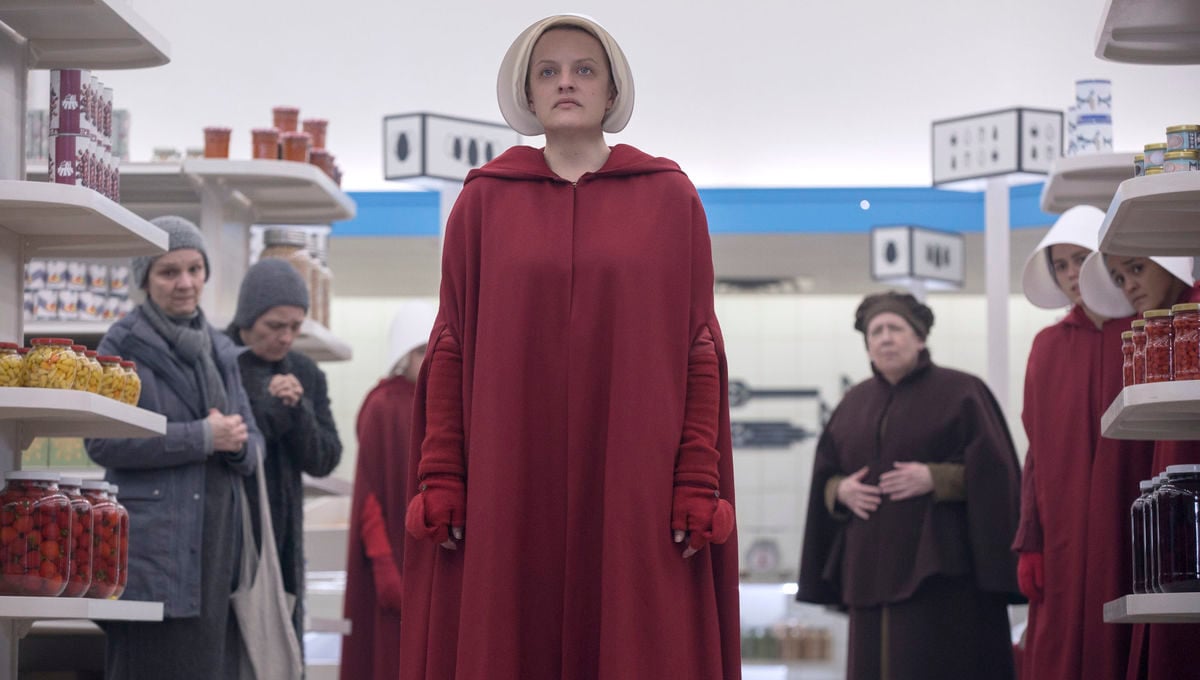 This is what Gilead has wrought.

June is no longer a hero. She has internalized and deployed Gileadean logic and tactics to psychologically destroy a vulnerable person. To harm Ofmatthew is a misuse of June’s intelligence and of the handmaids’ resources; they would be better served in using these tools against the Commanders. In the end, this episode of The Handmaid’s Tale dramatizes the ways in which we might feel the most contempt for those whose weaknesses reminds us of our own.

And that’s the brilliance of putting Lydia’s story alongside this one of June’s: it demonstrates the seductiveness of self-righteousness, the lie that hurting another will heal the self. More precisely, both Lydia and June’s tactics rely on weaponizing maternity.

And this is one of the things that The Handmaid’s Tale, despite its shortcomings, is doing really well: navigating the tricky issue of how the expectations and institutions surrounding pregnancy and motherhood—experiences that, at their best, can be enriching and sustaining—can be used against women. In exploiting others’ weakness as mothers, both Lydia and June tragically turn away from their better impulses, their impulses toward connection and compassion, in order to preserve their own power and, in doing so, become monstrous themselves.

Because, of course, what we know, and what June knows and perhaps even Lydia knows, too, is that aligning yourself with the patriarchy might help you survive for a little while, but it won’t save you in the end. Because under patriarchy, all women are already “unfit.”

Sara Hosey is the author of Home is Where the Hurt Is: Media Depictions of Wives and Mothers, forthcoming from McFarland in Fall 2019, and a feminist young adult novel, forthcoming from Blackstone Publishing in March 2020. She is a professor of English and Women and Gender Studies at Nassau Community College.