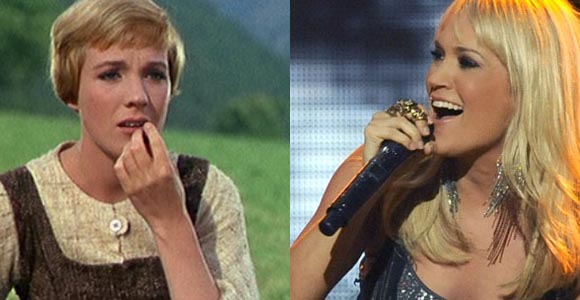 This was actually the first I heard of NBC’s attempt at recreating the 1960 Rodger’s & Hammerstein musical so I guess I’m more thrown by that than anything else. It’s being put together by Craig Zadan and Neil Meron, the executive producers of Smash, and is set to premiere Christmas 2013. And oh yeah, it’s going to be three hours long and air live.

“Speaking for everyone at NBC, we couldn’t be happier to have the gifted Carrie Underwood take up the mantle of the great Maria von Trapp. She was an iconic woman who will now be played by an iconic artist,” said NBC entertainment chief Bob Greenblatt.

There’s no doubt Underwood is a huge win for the project. She won American Idol in 2005 and has since gone on to have one of the biggest careers of any of its past winners selling over 25 million singles and 15 million albums.

“We’re thrilled to be presenting the Broadway version of ‘The Sound of Music’ live,” said Zadan and Meron, “and having Carrie Underwood as the star brings it to a new generation who will fall in love with it for the first time as many millions of people already have. It’s a particular joy to us as producers to see this amazing artist stretch into new territory with this classic musical.”

But…I don’t know, Julie Andrews is a TOUGH act to follow. Underwood certainly has the singing talent, that can’t be denied, but does she have that Maria charm? She only has one acting role under her belt, a guest appearance on How I Met Your Mother. Do you think she’s the right one for Maria?