These Indie Artists Got Tired of Corporate Brands Ripping Them Off, So They Made Their Own Store 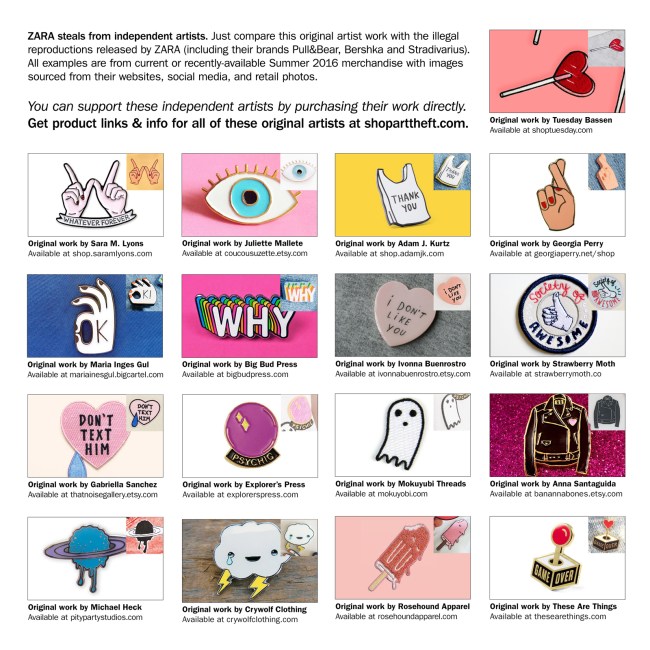 Corporate brands have been ripping off indie artists since, well, forever. But it’s gotten a lot trickier to get away with it in the post-internet age. Even though the internet makes it easier to find cool drawings and reproduce them with the assumption that no one will notice, the internet has also made it easier for indie artists to start up hashtag campaigns and other visibility efforts against corporations who try to get away with theft. That’s what LA-based designer Tuesday Bassen did when she noticed that Zara, a big fashion chain, had used designs that bore striking similarity to hers.

Bassen isn’t the only designer who has seen this happen at Zara in particular, although she is one of the more high-profile examples, and her hashtag campaign against the company did eventually result in Zara pulling the designs from their shop. But what about all of the other designers who have seen their work reproduced without attribution or compensation? They’ve decided to band together and link to their work in a new online resource called Unauthorized Reproductions, founded by Adam J. Kurtz, a fellow indie artist who also has a bone to pick with Zara for the same reason that Bassen does.

it’s time to hold @ZARA accountable for stealing from independent creatives like @tuesdaybassen, me & so many others pic.twitter.com/4Poe9VgIZr

Kurtz, Bassen, and dozens of other artists have compiled links to their own original designs, all of which appear to have been reproduced by Zara. The promotional image for the store puts the artists’ designs side-by-side with Zara’s products. There are 12 pins and patches on sale in total, and all of them have “inspired” suspiciously similar designs that appeared in Zara’s 2016 summer catalog.

Taking legal action against a huge brand can be difficult and prohibitively expensive for indie artists, although many of them may well be pursuing that route in this case. Regardless, this online store helps shine a light on the problem and put some money in these artists’ pockets. Plus, by banding together, the artists can help support one another rather than attempting to market themselves and campaign against art theft individually.

Perhaps the “Unauthorized Reproductions” storefront will end up serving as a refuge for many other artists in the future who will get ripped off by corporations and will want to resurface their work. I have a feeling this problem is going to keep on coming up again and again … but at least indie artists are pushing back against it together, while also surfacing access to one another’s work.

(via The Daily Dot, image via Unauthorized Reproductions)