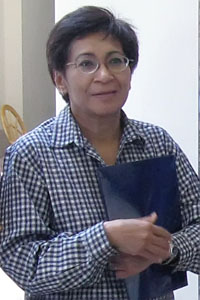 According to The Telegraph, Mazlan Othman, a Malaysian astrophysicist, will soon be appointed to a brand new international position: being the person who coordinates our response to first contact with alien life.  The move has reportedly been prompted by the recent discoveries of hundreds of exoplanets orbiting other stars.

Currently she is the head of the United Nations Office for Outer Space Affairs, a job she was first appointed to by Kofi Annan in 1999, though her other accomplishments include becoming the first Malaysian astrophysicist in history, and helping put the first Malaysian man into space.   According to

Professor Richard Crowther, an expert in space law at the UK space agency who leads delegations to the UN… “Othman is absolutely the nearest thing we have to a ‘take me to your leader’ person”.

There’s got to be a better title for that job.  We trust the UN, which is quite capable of giving programs names with disproportionate coolness to their actual purpose (I’m looking at you, UN-SPIDER).  Too bad Planetary Protection Officer is already taken.

One of the main duties of UNOOSA, is to make sure that everybody in the UN is using space for peaceful purposes.  Navigating that storm of diplomacy and high technology probably suits one quite well for a “take me to your leader” job.

Othman has been quoted recently as saying:

When we do, we should have in place a coordinated response that takes into account all the sensitivities related to the subject. The UN is a ready-made mechanism for such coordination.

The Telegraph says that we can expect more on this development next week, when Othman announces her appointment at, where else, the Royal Society in Buckinghamshire.

Full article (with tangentially related video) can be found here.

Update: Othman has since denied her involvement, but said that “it sounds really cool.”  We think so too.  :(