Ultra-thin Radios, Sensors, and Listening Devices Can Be Embedded In Our Walls Now

Charlotte Perkins was right after all -- there are totally women in the wallpaper. Probably men, too. 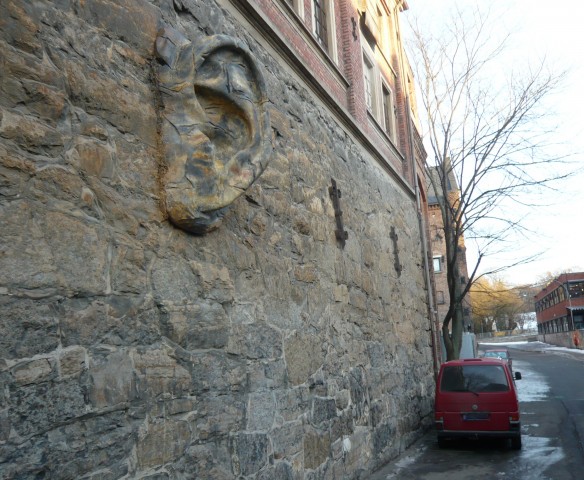 An invisible communication system inside a building? Sounds awesome at first — but maybe not in the way that a team at Princeton University’s been imagining it. They’ve been developing listening devices that can be embedded into walls and which are totally not going to be used in any sort of creepy Big Brother way, no sir.

The technology for this vaguely horrifying development rests on the ability to embed ultra-thin radios in plastic sheets. These sheets can be as thin as paper and painted over to look like actual wallpaper. Moreover, they can be powered by solar cells (so they don’t need an outside power source) and are flexible enough to go on diverse surfaces, like columns or bridge decks.

Okay, that last one is actually handy in a non-surveillance related way: this tech could be used to monitor structures for various bridges and roads, so that’s pretty cool. For instance, the team from Princeton University working on these sensors have said that they could be used to detect potential structural problems in large structures, whether they be buildings, bridges, or pipelines.

So how do these radios work? One key factor in their development has been temperature. The plastic sheets they are built on are not a traditionally ideal surface for circuitry, because plastic melts when it gets too hot — specifically at the temperatures required for many kinds of circuitry. Only recent innovations in materials and the way circuitry is printed (which reduced the temperature needed from 1,000 degrees Celsius to just 300) have made this venture possible. But that required new transistors which changed the kind of silicon used.

Traditionally, circuits are created using crystalline silicon, which allows the electrons to move quickly and directly. But project collaborators James Sturm and Sigurd Wagner figured out how to use amorphous silicon, which has less of an orderly interior structure. While this makes it harder for the electrons to move as quickly, but it doesn’t need as high of a temperature to work. So our plucky heroes at Princeton said, “Screw that! Let’s see if our technological ancestors had any bright ideas.”

Turns out: they did. Edwin Armstrong, the man who invented the FM radio, used something called a super-regenerative circuit, which uses other components to bypass the silicon– namely, bouncing the electrons between an inductor and a capacitor. Energy levels change due to the rapid movement, and that creates a new frequency.

The next step to be faced is how to make this structure large enough to be useful at finding structural weak points before any damage occurs. The team hopes to have a prototype next month, but will likely need several more years before a well-working model is complete.

(via Phys.org, image via Svennevenn)