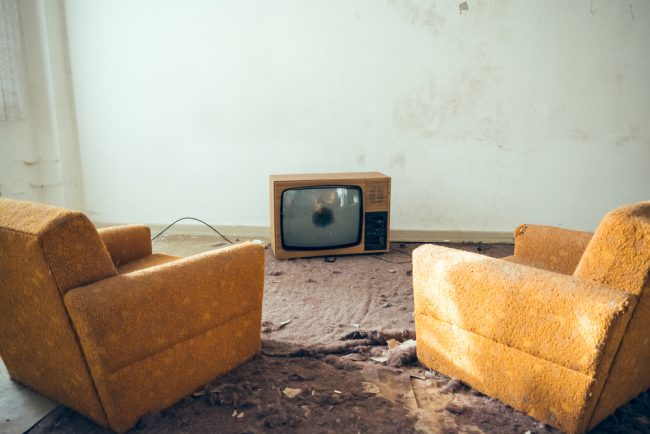 They say life imitates art, but these days, what with electing a reality star president who will keep working in reality television while in office, we seem to be caught in a hall of mirrors, reflecting back on themselves in an infinite loop of life imitating art imitating life imitating … well, you get it.

Case in point: According to The Hollywood Reporter, just days after the election, Patrick Moran, the ABC Studios president, called Kenya Barris (the creator of Black-ish) to discuss a show they’d been planning about two “politically divided pundits who fall in love.” Moran had what he described as a “wake-up call” and was now determined to take a different approach, to make both sides equally relatable, saying, “In years past, it would be very easy to let one side feel like the cartoon and have the show assume that the audience is siding with the other.” Now, he wants to make sure both sides are represented fairly.

In a certain light, this idea sounds great. We probably don’t need another Aaron Sorkin-esque self-congratulatory vilification of conservatives (and I say that as an admitted lover of self-congratulatory Sorkinisms), and Black-ish is one of the most consistently funny, often nuanced comedies on network television. So sure, let’s all gather round the warm glow of the television and sing Kumbaya with our progressive and conservative brethren.

Except this isn’t about liberal vs. conservative. This is about Trump’s supporters vs. everyone else. If any other republican candidate had won, and ABC decided they wanted to appeal to those constituents’ values, that would be a different story. I love binging HBO, BBC, and Netflix’s most Prestige TV offerings and revel in my own snobbery, but of course television should be inclusive—except it already is. Sure, there are lots of shows aimed at “upper-income brackets,” but the president of TLC is also talking about “taking a hard look: Are we telling the right stories? Are we reaching the right people?” And have you looked at TLC’s original programming lineup? It’s wall-to-wall Duggars, hoarding shows, and New Jersey bakers.

And that’s where pandering to Trump supporters is different from any other group. He was elected for a lot of reasons (many of which we’re still trying to wrap our brains around), but in large part, he was a promise to everyone who felt left behind by their elected representatives. That does include poor and working-class people and families, yes, but that promise of recognition and attention also appealed to groups of racists, misogynists, xenophobes—people who have spent their lives thinking they didn’t have a piece of the pie while not realizing it was because they had the whole thing. And now that suddenly more people are being invited to the table, they’re feeling like they’re being forgotten, like they’re losing what has always been rightfully theirs.

So do we need more television that appeals to these groups? Or do they feel like there’s not enough simply because not every show on television is for them? Besides all the TLC and A&E’s Duck Dynasty/Pawn Stars/bounty hunter fare, a whole slew of shows not aimed at high-income elites immediately springs to mind. To start, there’s pretty much everything Kevin James has ever been in. But what about This Is Us? That’s one of the best shows on television and at the very least, the parents’ storyline should have an appeal across income brackets and political lines. And sure, it’s on and elitist paid cable channel, but Shameless is a brilliant show about being stuck below the poverty line, with (albeit pretty screwed up) family values, to boot. (Now if only Fox hadn’t canceled Raising Hope, its network comedy sister show.) And Fox is full of wide-appeal shows. The Simpsons? Family Guy, anyone? There is great television out there that is in no way aimed solely at the same people who voted for Hillary Clinton.

So how would the creation of more shows for the Trump-voter demographic be anything other than pandering to a group that feels under-represented, simply because they’re not disproportionately over-represented? Perhaps even more worrisome is the fact that Moran has said that even more than a shift in content, he wants his shows’ shift to be tonal, moving to “hope, optimism, and escapism,” which, again, sounds great. Except that when you combine those happy-feely nonthreatening sentiments trend with a desire to appeal to Trump’s demographic, that veers dangerously toward normalizing those sort of demands—the demand for total, constant pandering and validation. Television doesn’t need to be separated by liberal and conservative appeals, and one group doesn’t automatically need to be villainized. But is it actually possible to avoid rocking any boats and make every group happy in a landscape this divided?

At least not every showrunner and network head is refiguring their entire slate based on the need to appease the lowest of the low. We still have people like Ryan Murphy, who, no matter what your feelings on his work, has never had a problem risking alienating men or anyone else by making shows about strong women. At THR’s Women in Entertainment event on December 7, he said,

“I’m doing Feud [starring Susan Sarandon and Jessica Lange for FX] not just because of the larger-than-life characters but because it directly confronts ageism, sexism, female pay scale inadequacies, the glass ceiling. It’s a show that asks for and demands rebellion.”

Whether you want rebellion or just escapism (and they’re not even mutually exclusive!), hopefully this trend of across-the-board, make-no-waves, let’s-all-just-be-friends bland appeasement will end before it begins. Because no matter what you’re looking for, that’s not the road to quality television.

(via THR, image via Shutterstock)