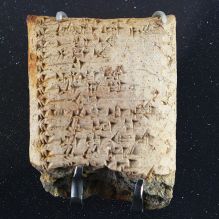 For those of you who always run into problems when trying to read ancient Ugaritic writing used in the lost city of Ugarit, behold! Scientists have used a computer program to translate the 3,000 year old language –first discovered by French archaeologists in 1920, yet only deciphered twelve years later–in mere hours, the Daily Mail reports.

“Traditionally, decipherment has been viewed as a sort of scholarly detective game, and computers weren’t thought to be of much use,” said research head Regina Barzilay. “Our aim is to bring to bear the full power of modern machine learning and statistics to this problem.”

Upon comparing Ugaritic (circa 14th to 12th century BCE) to its linguistic relative, Hebrew, the program–through repeated analysis–successfully mapped 29 of the ancient language’s 30 alphabet letters to their Hebrew counterparts. It first identified common symbols between the two languages, and then gradually fine-tuned its alphabet map as much as possible, eventually able to recognize 60% of words Ugaritic and Hebrew shared.

The software’s success perhaps is promising for cracking previously untranslatable languages, including Etruscan, The Rohonc Codex, Rongorongo, Linear A, and Vinča symbols. However, some researchers disagree, arguing that many of these texts do not have known linguistic relations to compare with, therefore rendering the software useless. What’s more, the computer can not always sure where a word begins and ends.

Barzilay says, “The output of our system would have made the process orders of magnitude shorter.” But let’s get to practical uses here; the team believes this new breakthrough can help refine translation services like Google Translate. Good, we can continue pretending we’re talented multi-linguists.