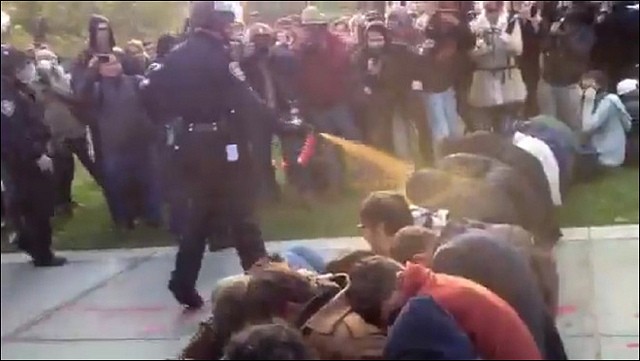 According to a report from The Sacramento Bee, UC Davis consulted with a firm and spent an estimated $175,000 to scrub an image of a police officer pepper spraying innocent protestors (like the one above) from its Google search results. The image in question is from a 2011 news story about a campus police officer who oh-so-caually pepper sprayed Occupy protestors sitting on the ground blocking foot traffic along a campus path. Once it hit the internet, it was memed into oblivion, photoshopped by plenty of folks looking to make a joke of the officer who seemed to just lackadaisically be okay with pepper spraying peaceful protestors. Understandably, UC Davis administrators and officials would want something like this downplayed, but given the fact that this is now a part of their history, there’s something wrong about trying to erase it completely.

Of course, it’s important to note that the money used in this campaign to eliminate the photo came from a combination of student tuition fees and taxpayer money. So, you know … in case you were wondering where your hard-earned money is going.

The Sacramento Bee reports that the aim was to promote the good things that UC Davis does: the work of its students, staff, and administration while trying to counteract the negative things that have come up in the past, like the “venomous rhetoric about UC Davis and the chancellor,” as one consultant described it. UC Davis spokeswoman Dana Topousis said, “We have worked to ensure that the reputation of the university, which the chancellor leads, is fairly portrayed. We wanted to promote and advance the important teaching, research and public service done by our students, faculty and staff, which is the core mission of our university.”

To a point, sure, one would want the focus of your school to be on the great things you’ve all been able to achieve. But erasing history by manipulating technology isn’t the way to do that, especially when it comes to the history behind an educational institution, especially one as famous and storied as UC Davis. What could have been (and may still be) a great teaching moment has now turned into a bit of a debacle that is causing the opposite of the intended effect; now that this story is out there, you can bet that the photo will turn up even more in people’s search results for UC Davis. This is something called the Streisand Effect, which is, according to Wikipedia, “the phenomenon whereby an attempt to hide, remove, or censor a piece of information has the unintended consequence of publicizing the information more widely, usually facilitated by the Internet.”