Because banning alcohol has a long history of being a great idea? 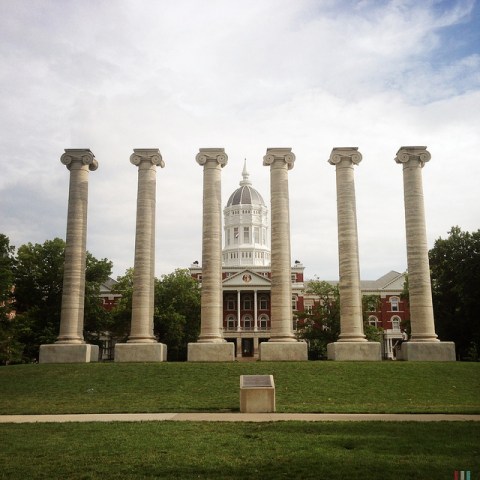 What’s a university to do when sexual assault is a problem on campus, as it pretty much always is if you’re reading this in 2015? If you’re from the future, and that problem has been solved, great! Could you please tell us how it happened? Because we’re pretty sure banning women and alcohol had nothing to do with it and really wouldn’t mind skipping those steps.

But a leaked document from University of Missouri suggests that those restrictive, victim-blaming steps are exactly what they’re planning. According to University of Missouri alumnus Rob Fox, school chancellor R. Bowen Loftin contacted the Mizzou Fraternity Alumni Consortium and asked them to come up with some rules for campus fraternities to reduce sexual assault. What they came up with was pretty much the frat guy-mentality nonsense you’d expect, minus alcohol—my apologies to any readers currently or formerly in fraternities who don’t think women are the reason that women get sexually assaulted.

Fox Instagrammed the invite to the discussion to create the rules:

In the time it took the school to write this pictured release 12 Mizzou students were assaulted on or around campus.* Not sure what the exact details of these policies are yet (though I have heard rumors) but suffice it to say they are definitely a step further in universities treating their students like little children whose hands need to be held longer and longer instead of letting them learn how to be adults. And specifically on the part of @mizzou, the Greek Life office, and fraternity alumni, especially in regard to the impending guest visitation policy, this is apparently a confirmation they believe all fraternity men to be potential attackers and all their female students to be potential victims above all else, at least from Thursday through Saturday. The issues these policies are attempting to address are serious and immediate, and need to be dealt with for sure. We’ll see what the actual details are, but it’s seeming like the rules that are going to be implemented are lazy, broad, dismissive of student intelligence and integrity, and more about liability than student safety. *Rough estimate based on the school and local police department’s ability to keep its students safe from the things that have far more often proved to be dangerous to them than frat parties.

And he says that, among more understandable solutions like a summit with the Consortium and fraternity/sorority leaders on preventing assault, they also came to the conclusion that hard alcohol should be banned in favor of beer, and… well, this:

Students are understandably upset, and women who represent sororities on campus sent a letter to the chancellor expressing their displeasure that they were left out of the process of creating the rules that place restrictions on them under the guise of safety. After all, the solution they’re proposing is to literally penalize women by placing them under curfew because there is apparently no other way to control what men do between the hours of 10 and 3 than place restrictions on women.

College dudes: basically just gremlins. Do not get them wet (with hard liquor). Do not allow women around them after midnight. Come on, these are nearly grown men who got accepted into college and should theoretically know right from wrong—there has to be a better way to make them act like it and not like literal monsters.

(via Daily Dot, image via stannate)