The Poor Woman Who Will Forever Be Known As Typhoid Mary 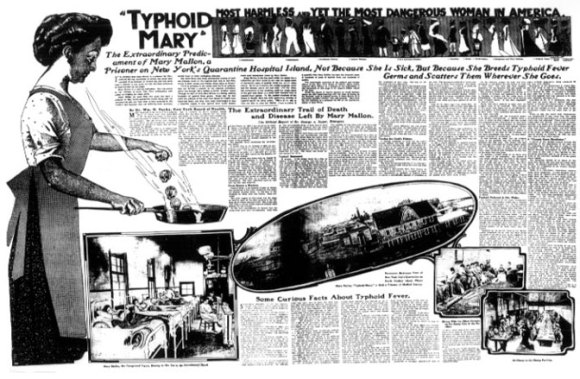 Typhoid Mary (no, not the Marvel Comics villain), was a real woman blamed for spreading typhoid fever in the 1900s. And you thought you had it bad when you gave your roommate a cold during midterms. Read on for her story. (Warning: It’s not cheery)

Atlas Obscura delves into the case of Typhoid Mary, aka Mary Mallon, an Irish immigrant who cooked for wealthy New York families. She came to NY as a teen in the 1880s but by 1906 she found herself in deep trouble. “She spent the summer working for the Warren family while they vacationed in Oyster Bay, Long Island. Shortly after she left, three family members, two maids, and a gardener all came down with typhoid fever,” writes Atlas Obscura. “The owner of the property hired George Soper, a sanitation engineer, to find the root cause. Soper hypothesized that it was Mallon, after learning that all of the families she had worked for had had outbreaks at some point.”

Ok, a fair enough assumption, something which could have easily been dismissed had Mallon cooperated. She didn’t, likely because she was scared as hell. “[Soper] asked to test her stool and urine but she refused, as she felt perfectly healthy (asymptomatic carriers were unheard of at the time). Soper continued to plead with her, even offering to pay her royalties from a book he wanted to write about her. Mallon just wanted to be left alone and told him that she had been tested privately and the results were normal.” But Soper felt strongly enough to get the police and health department involved who made Mallon get tested and guess what? They found typhoid bacteria. 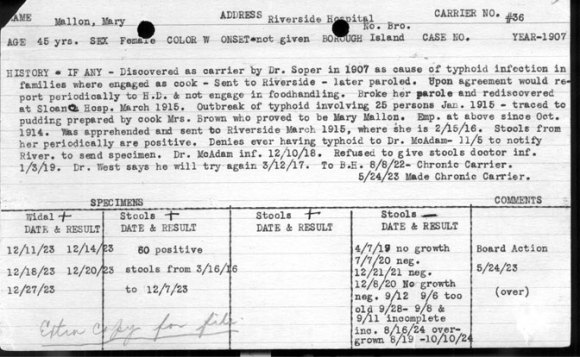 Mallon ran but was eventually apprehended and put in a quarantine facility in the Bronx. And there she was held for three years, one of history’s only imprisoned typhoid carriers. While Mallon was the first proof that a person could be a typhoid carrier and not show symptoms, after her indefinite imprisonment… well, nobody else got locked up. Mallon was made into a terrifying figure, while many other carriers walked free.

She was released in 1910 after promising them she would no longer work as a cook but held true to the belief there was nothing wrong with her. “She worked as a maid for a time, but as the pay was not lucrative, she felt obligated to return to cooking. In 1915, 25 people at the Sloane Hospital for Women came down with the disease,” they write. “The health department found her working there under the alias ‘Mary Brown’ and immediately sent her back to her island prison. There was no chance of her ever being freed again and on November 11, 1938, she succumbed to pneumonia, dying on the floor alone in her room.”

And that, dear readers, is the sad tale of Typhoid Mary Mallon.