The 'Trashy vs. Classy' Economic Divide | The Mary Sue 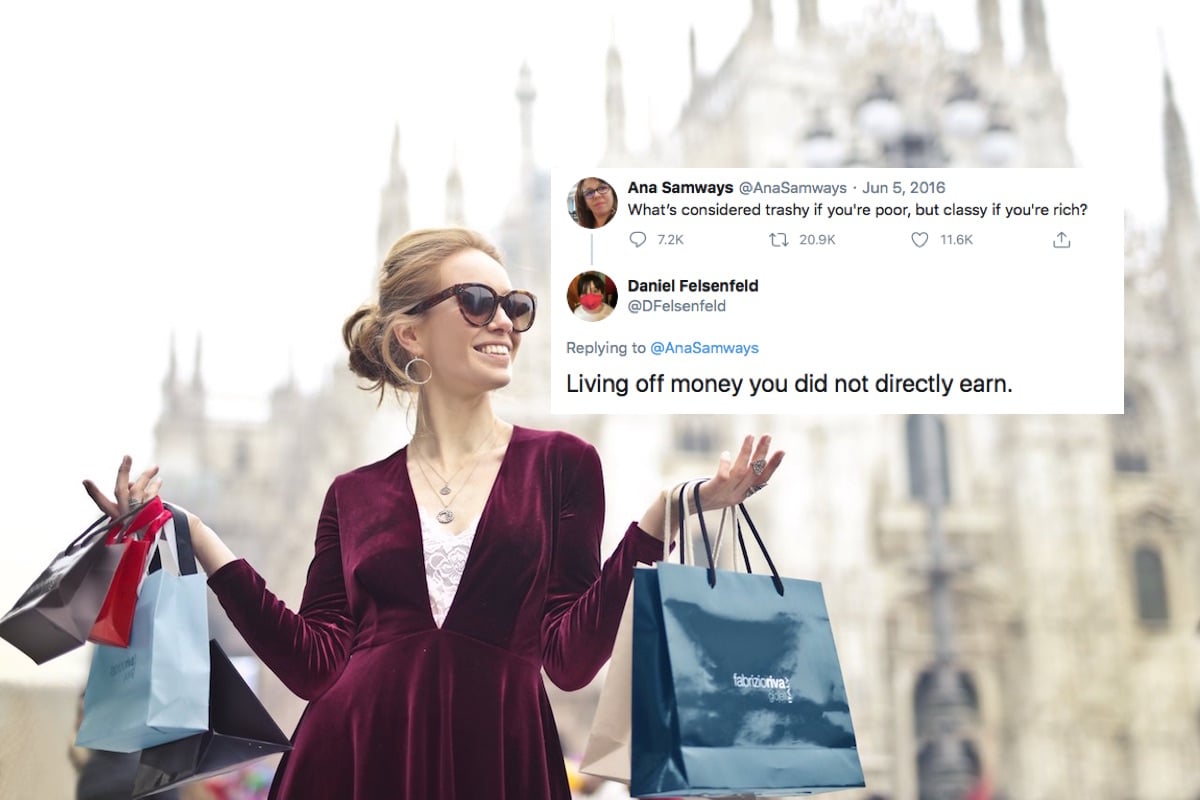 When New Zealand columnist Ana Samways asked her followers what sort of behaviors, objects, and actions are considered “classy” for the rich but “trashy” for poor people, the answers were illuminating. Though Samways’ tweet is years-old, it was recently revived and given new life, which makes sense in our current bleak environment.

With so many in dire economic straits, discussions around money have become more prevalent on social media, and this question is perennial. Not only do we have a world hugely divided by massive wealth gaps and income inequality, but the way people are perceived for the same things turns on a dime based on the class they occupy. Let’s see how Twitter users weighed in.

Here are some of the replies that had us nodding along and then shaking our heads at humanity.

Getting money from the government https://t.co/4eYM0foO5I

Ripped clothing. On the poor, they’re torn. On the rich, they’re vintage.

By the second point, I mean when poor people are bilingual, it’s often assumed they’re immigrants and/or don’t speak English well, even if the reality is they’re citizens & fully fluent in both.
But if a rich person learns a 2nd language, they’re assumed to be educated & worldly.

I once saw a conservative meme against gov benefits and how people should earn everything so I proposed a 100% inheritance tax, completely in line with that way of thinking, and suddenly people weren’t all about it anymore

The great majority of these tweets concern image (the clothes we wear, accessories, hair color, tattoos), food, consumption of substances like drugs and alcohol, financial help from the government or institutions, and personal actions like multiple marriages, having many children, and tax evasion. That so many of us immediately can name a whole host of behaviors perceived in opposition based on income level shows that we are taught this almost universally, with our media and politicians shoring it up.

Having children by multiple partners.

Having a sex worker as a companion.

Avoiding the payment of taxes (“It means I’m smart.”)

Leaning on the support of religious organizations.

And it falls right in line too. If you game it politically on a grand scale it’s being intelligent and savvy but if you’re doing it low key just to get by basis you’re a thief.

owning horses, eating biscuits, making your own clothes, having assistance paid or unpaid with childcare, taking drugs, buying anything for entertainment that costs more than £100, receiving money legally or illegally from the government and my fave: tax evasion

There are so many excellent tweets on this topic it’s impossible to narrow them down. One particularly interesting point is how many behaviors considered eco-conscious and “environmentalist” when they’re adopted by middle and upper-class people are framed as “trashy” when they’re a necessity for the poor. There’s nothing wrong with people wanting to be environmentally-minded, of course, but we should take a good hard look at who is getting applauded and who is getting side-eyed.

Basically all the stuff us poors do to save $ becomes “eco-conscious” or trendy when middle class (or higher) white people do it. Eg. Saving bone and veggie scraps to make soup, making your own clothes, bringing your own water bottle, walking someplace instead of driving.

Soooooo much this!
And I’ve pointed it out to wealthy friends that their wokeness on environmental issues is necessity for me. It’s incredible to see their excited ideas for reusing or composting, etc.

The reality is that it’s difficult to find any behavior that isn’t lauded or at least excused, if you’re privileged—while those enjoying less privilege can suffer from being in the same position.

Being a high school/college drop out is a big one

Poor: threw their life away

Rich: such an inspiration, school is not needed for success

This. The only time I was well paid for an acting job that got some exposure, people started sending me free things.

I thought – no, I could actually (briefly) now afford this, why are you giving it to me? It’s very revealing of the way we treat wealth.

Declaring bankruptcy MULTIPLE times. They’re seen “savvy” when they play the system to stay wealthy, and we’re penalized (credit trashed for 10 years), stigmatized as financially irresponsible, as and “taking advantage” of that same system. I was just thinking about this earlier.

Rich: authentic, nothing to prove.

A lot of immigrants and POC have multigenerational homes, & when they do it’s looked down on as too many people in one home. Whereas if rich people, or even just middle class white people, do this, it’s seen as sweet & respectable.

Can’t believe nobody said, but: cheese.

I initially thought the following was about Trump but it turns out maybe we have similar standards for shady politicians worldwide.

Having 6 or 7 kids, multiple affairs, living in a house paid for tax payers, looking like you’ve been dragged through a hedge, shacking up with your pregnant mistress, just after leaving your cancer stricken wife #BorisMustGo

This is, perhaps, the number one thing:

But the likely answer to Samway’s initial question is “absolutely everything.”

Seems absolutely everything is turned around and ironic if you can afford better, but choose cheaper.

Right up to living in a falling down house. If that house is a stately home, it’s eccentric.
If you’re poor, it’s squatting.

For many of these behaviors, the rich-are-always-right, poor-are-in-poor-taste divide has been there for, well, centuries. Maybe since the dawn of resource disparity. These social judgments aren’t new; what’s new are the call-outs on social media and getting to see hypocrisy laid bare in thousands of Twitter “likes” and replies.

The next time you hear someone commenting on a “trashy” behavior, spin that around and ask them how they’d feel if a rich person were doing the same thing. And when it comes to “doing crimes,” it’s the wealthy who are getting away with criminality on a large, damaging scale, while we’re made to worry that victimless crimes committed by people with a lower income are hurting society. And that’s the biggest swindle of all.

You can check out the entirety of Samway’s thread for more infuriating answers, if you’re not quite mad as hell enough yet.