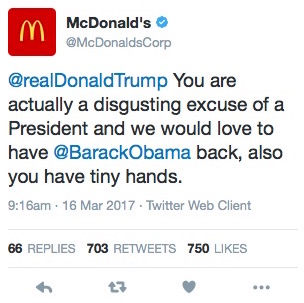 McDonald’s came at Trump where he lives this morning: on Twitter.

As you can see in the screenshot above (since the tweet has since been deleted), whoever had control of the company’s corporate Twitter account this morning was not subtle in their critique of the president. Pretty much instantly, Twitter exploded with glee (at least the corners of it that I frequent), and approximately everyone made the same “I’m lovin’ it” joke I used for the headline on this post, because it’s just too true.

The replies to the tweet, when it was still live, were flooded with people suddenly pledging to buy some McDonald’s, although the swift removal indicates that the corporation itself isn’t quite as publicly on board with the resistance as whoever sent the tweet.

Now, they’re claiming they were hacked, but we’re really holding out hope that the truth is some employee just did not care about the obvious consequences. Really, Trump supporters would surely understand and even applaud disciplinary action against a rogue anti-Trump social media worker, and nobody’s buying the tired hacking excuse anyway.

Meanwhile, people are already responding to the hack tweet saying they’ll gladly buy some McDonald’s if they’ll put the original tweet back up and that they’d be better off for it:

They shouldn’t worry so much about Trump’s opinion, anyway. Sure, he could strike back with tweets of his own, but those tiny fingers can’t fit around a Big Mac anyway, so it’s not like they’ll lose on his patronage.