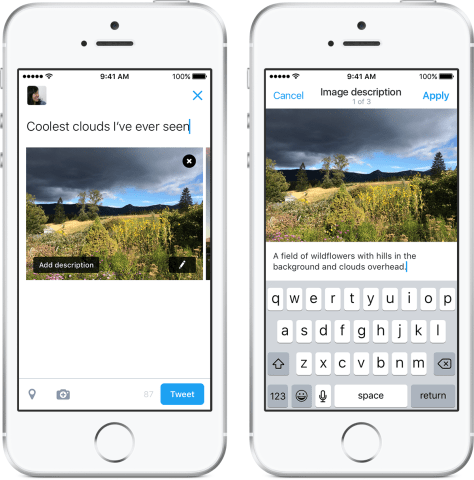 In an announcement titled “Accessible images for everyone,” Twitter has begun to roll out a new feature for the visually impaired: the option to add in descriptions of photos uploaded on the platform. By adding in a description of a photo via the alternate text field, you can allow those who use assistive devices like screen readers and braille displays to understand what’s depicted in the image.

It doesn’t look like the setting has been rolled out for everyone yet (I don’t have it yet, myself) —but you can check now to see if you have the option by going into “Settings” and then “Accessibility” in your Twitter app on iOS or Android. In that area, an option will appear to turn on “Compose image descriptions.” Once you have that setting turned on, Twitter will invite you to describe the images you upload; visually impaired Twitter users will be able to read your descriptions and better understand your intent.

Also, according to Twitter, descriptions can be up to 420 characters—which sounds like a fun way to cheat the system and include more information in a tweet if you’d like to elaborate on an image.

It’s nice, albeit unexpected, to see Twitter implementing accessibility-related changes, but it all seems to be part of their recent attempts to create a safer and more user-friendly version of their service. It’s a nice change, even if it is one that seems a few years too late. Better late than never?