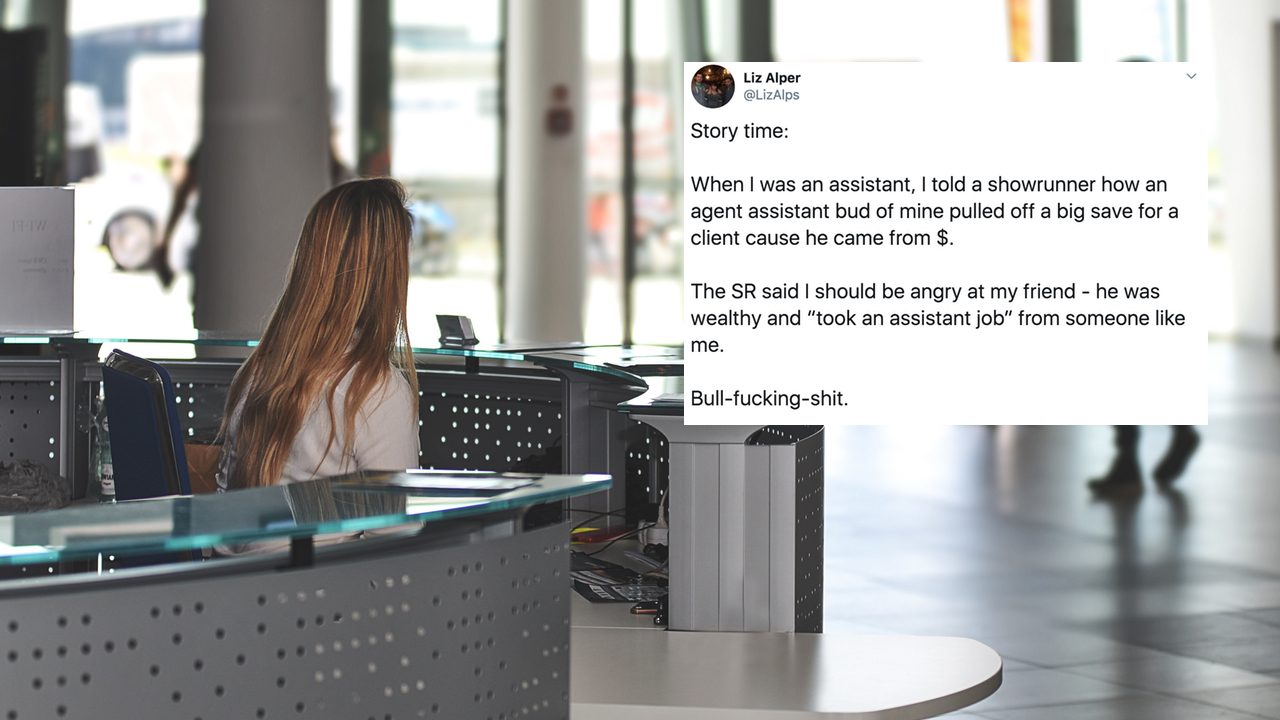 Twitter is having a productive day discussing and calling out the problems with how Hollywood’s writer and production assistants are grossly underpaid. This is not a new conversation, but it is being brought to light by writer/producer Liz Alper, who wrote a Twitter thread about her own experience as an assistant and the problems with the pay there, especially considering how expensive Los Angeles is.

I said it then and I’ll say it now – my friend didn’t take an assistant gig away from a candidate from a less financially secure background.

The Big 4 agency who set the assistant pay so low made sure those candidates couldn’t afford those jobs.

Want more diversity in the upper ranks? Start growing it at the bottom. Pay assistants living wages. Pay them benefits. Stop giving bullshit excuses like “You’re technically a temp for a year,” or “BUt tHerE’s ovErtIme,” or, my favorite, “That’s how it’s always been.”

Now, let’s say you’re an assistant. Your salary ranges ranges, on average, between $500-$700/week… before taxes.

Now. Many assistants may say “but I make more than $600/week w/benefits.” AWESOME. TRULY.

But I bet a shit ton of you are making FAR less, being told you’ll make up for it in “overtime” (shout out to agency assistants rn) and, in fact, are barely eating so you can pay bills.

This is an INDUSTRY WIDE PROBLEM. ALL of Hollywood needs to pitch in an fix this shit.

But I’m not a network head or an agent or a production supervisor. I’m a writer (and not a big enough one to run my mouth like I have been so poss. a writer with a short career).

3) Studios are sometimes refusing to give assistants overtime. Push back on the support staff’s behalf.

4) Do not be the showrunner who gives the WA all the scriptcoord’s responsibilities to save money. Support staffs talk and they’re talking about you.

#HomogenizedHollywood is the result of locking out diversity of ALL kinds, incl. financial backgrounds.

So if you’re serious about changing the playing field, of being “woke”, of your vows to do everything you can to champion change – start by PAYING FOR IT.

Alper’s Twitter thread is important, and so is the ensuing conversation. Hollywood does not pay their assistants enough, and it is a form of gatekeeping. Assistant jobs are the best way to break into television writing, and if the pay is too low for people to afford to take that job and hope to break in, that’s a problem. Assistant gigs shouldn’t pay so low that only people who have a safety net can take them. You shouldn’t have to take on a second job if you have a full time job already.

There’s also the question of benefits. If assistants are doing underpaid or even unpaid work trying to break in, there’s a chance that they might not have benefits either. That means they either pay for a premium out of pocket or don’t have insurance, which is incredibly hard for those who need it. Assistants deserve better for the work they’re doing, which include long hours and running errands all over Los Angeles.

The hashtag #PayUpHollywood has started circulating, with people sharing their stories of working in Hollywood. Class privilege plays a huge role in who succeeds in Hollywood, as well as nepotism. That shuts out so many people from entering the industry because of the fact they simply cannot afford to take or stay in low paying jobs. That’s the sad truth of the way the industry works.

Hopefully, this conversation means that something can change. Change, after all, has been a long time coming in this industry.