Twitter Considers an Editing Feature, Even Though That’s Really Not What We Need Most, but Thanks Anyway 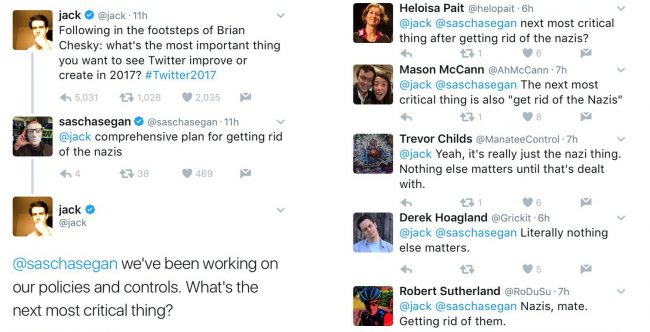 Twitter CEO Jack Dorsey thinks that Twitter needs an edit button. And, sure, that would be nice? But it’s really not at the top of the list of things we’d like to see change at Twitter. I realize it’s a tired response to just keep saying “fix online harassment” any time Twitter changes anything at all about their service, but … seriously, they should probably put their nose to the grindstone on that one.

Unfortunately, that wasn’t users’ most-requested feature when Dorsey solicited suggestions about the service. The most common suggestion was an editing feature, and in response, Dorsey admitted that “a form of edit is definitely needed” on the service, and that Twitter staffers had considered the problem before. But how would it work in practice?

Obviously, there’s a high potential for abuse with an edit button. Once a bunch of people retweet your tweet, you could edit it to say just about anything, like hate speech or just nonsense that makes people look bad. So, many have speculated that if Twitter did implement an editing feature, there would need to be some sort of time window in which the tweet could be edited, which could potentially limit misuse, but wouldn’t prevent it. Personally, I would also recommend that the tweet say “edited” somewhere on it; Facebook does this for edited statuses, and includes a timestamp about when the edit occurred. Perhaps Twitter could even consider an option to look at the unedited version of the tweet, which would be logged.

The ability to edit tweets isn’t something I care about—I’m already used to not being able to edit my tweets, so I don’t care anymore. Still, I don’t think it’s a fundamentally bad idea, if it were implemented with the safeguards that I mentioned. Facebook has allowed users to edit their statuses for a long time, and it’s an incredibly helpful feature. Public Facebook statuses can become news items, too, just like tweets—which is why it’s important that Facebook includes that crucial indicator that a status has been edited after the fact.

On this topic, I still think Twitter could learn something from Facebook’s current policies when it comes to privacy controls. (I hope Twitter doesn’t learn from Facebook’s other policies, but that’s another story.) Something that I love about Facebook is the high level of granular control that I have over who sees which status. I have multiple custom friends groups, and I can change any status after the fact to display only to certain people, depending on how I feel about it. If Twitter implemented something like that on a tweet-by-tweet basis, I think it would significantly reduce harassment, and it would also make the service more popular.

I do recognize that it would be incredibly difficult to implement such a massive change to how tweets display, and it’s possible that it’s too late to start such a massive project at this point, since Twitter has been running out of money for a long time, and their harassment problem has only made matters worse. So, perhaps their experience will merely serve as a cautionary tale for other social media founders in the future. I can only hope that the tech industry is paying attention.

(via Engadget, image via Twitter, featured image via Norebbo)