Does The Walking Dead Have a Big Negan Problem? 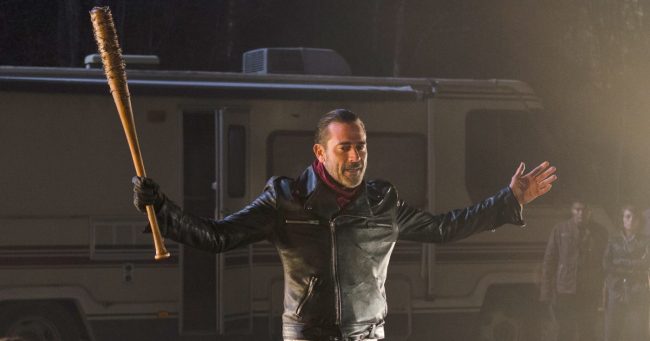 I haven’t watched The Walking Dead since its first season (if you read my articles, you’ll have seen my many confessions to being easily frightened and generally avoiding horror). But as a pop culture writer, I try to stay apprised of what’s happening, and I’ve kept up on Walking Dead news throughout the years, reading recaps and articles on major twists and plotlines and, of course, the splashiest deaths.

So I had known about actor Jeffrey Dean Morgan’s much-touted rollout as the iconic comic’s villain Negan, and read the many takes during the agonizing season break while fans waited to discover who Negan had first killed on the main cast. Since then I hadn’t heard much noise about Negan, though at this year’s New York Comic Con, I spotted many Negan cosplayers, and several merch tables were selling officially licensed replicas of his barbed wire-wrapped baseball bat, Lucille. When a villain has a named weapon that even non-fans can identify on sight, that’s pretty damned impressive. I figured that Negan’s ubiquity made him the character that everyone loved—or at least loved to hate. 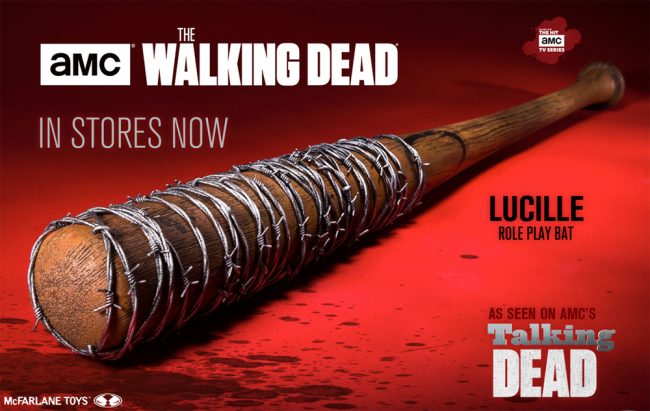 That’s why I was struck by a take in USA Today by Kelly Lawler, whose headline declares, “The Walking Dead needs to kill Negan to survive.” In the article, Lawler argues that Negan has overstayed his welcome by whole seasons, and is now bogging down the entire show.

“Negan is still alive, kicking and siphoning off what little energy the aging series has left,” Lawler writes, explaining that she’d expected Negan to be killed off a long time ago. Instead, “The villain has been at the center of nearly every storyline for nearly two years, and he’s a repulsive, tiresome and — worst of all — boring antagonist.” She lays the blame for Season 7’s ratings decline squarely on the show featuring Negan and his attendant plotlines so prominently.

Most damningly, Lawler argues that Negan was never fleshed out or presented well in the first place:

From nearly the moment it began to name-drop the villain early in Season 6 (Nov. 2015), Dead handled Negan badly. The character is a big presence in the comic books on which the series is based, and the TV version seemed to rely on that extratextual knowledge to give the character gravitas and depth, rather than actually earning it.

The threat posed by Negan and his followers was never clearly articulated, and it was impossible to make him seem truly menacing, partly due to  the fact that our heroes underestimated him. But that choice made the build-up to Negan’s first appearance seem forced.

When Negan finally surfaced, I was already tired of him.

She praises Morgan for being a good actor, but says that his portrayal leaves Negan as simply surface-level evil, without the substance or conflict that makes for a truly great villain. Instead, The Walking Dead spent “16 episodes demonstrating his depravity,” and even worse, all of this repetitive violence wasn’t even interesting: “This barrage of barbarity quickly became monotonous. Yes, Negan’s scenes were grotesque, but they were also utterly dull. In most of his scenes, he brought the momentum to a dead stop. His evil machinations were more annoying than threatening, his dialogue was flat and his scenes a slog. ” 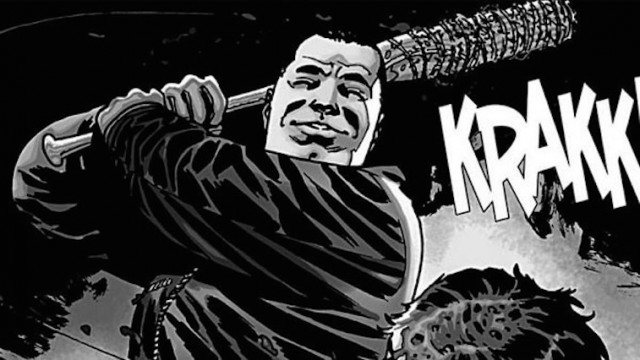 I asked our social media guru and TWD authority Daniella Bondar whether she concurred with Lawler’s assessment. Daniella responded with a resounding YES. “They did a terrible job with him,” says Daniella. “Dude does not shut up.” She adds, “They just made him too much too fast instead of slow-playing him … If they want to keep him on the show a while, which is the plan I think, then they should have had a more editing eye with him.”

And herein lies the biggest problem, as both Lawler and Daniella point out: rather than having plans to summarily deal with the Big Bad once and for all, it looks like The Walking Dead wants to keep him around for as long as possible. (Maybe they are selling a lot of replica baseball bats?) The whole premise for the new season “is being hyped as an ‘all out war’ between Rick and Negan,” so it doesn’t look as though he’ll go anywhere fast. Even if Negan ultimately doesn’t survive the war, that could be another 16 hours of his relentless and apparently boring cruelty.

I should also point out that Jeffrey Dean Morgan recently drew the ire of fans for posting statements on “Blue Lives Matter” and “All Lives Matter,” writing in a now-deleted Instagram post, “Dear a-holes, Blue lives do matter. Can’t believe I need to explain to you this fact. All lives matter. All of em,” thus demonstrating either an inability or an unwillingness to understand the importance of the Black Lives Matter movement. Fans who were already exhausted by Morgan’s portrayal of Negan now aren’t feeling too kindly about Morgan, either.

As an outsider looking in, it seems to me that The Walking Dead‘s creatives loved the idea and the mythos of Negan more than knowing what to do to make his character truly effective and menacing in a way that fans actually care about. When you keep beating a dead zombie—or person—again and again with the same barbed wire bat, at what point do you say “Enough?”

Lawler ends on a somewhat hopeful note: “Sunday marks The Walking Dead’s 100th episode, and part of the reason the series has survived so long is that it has managed to bounce back from creative downturns. Once the series dispenses with Negan, it can do so again if writers find new villains with some vitality.”