Company Behind Tupac Hologram Files for Bankruptcy | The Mary Sue 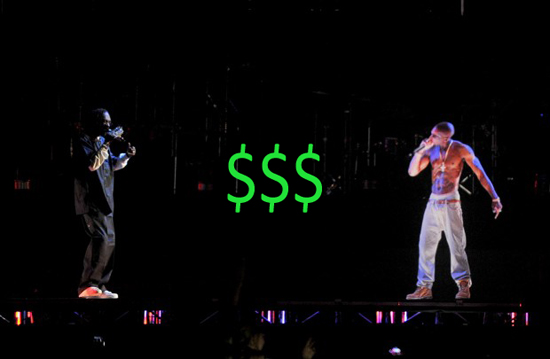 Remember that little stunt back at Coachella 2012 when Snoop Dogg performed with a holographic Tupac Shakur? Well, that was only made possible thanks to Digital Domain Media Group, which has also been behind a number of special effects in films. They even won an Oscar for The Curious Case of Benjamin Button. Even so, none of these ventures panned out well enough as the company has now filed for bankruptcy. Looks like the business of holograms didn’t exactly bring in the big money fast enough.

Digital Domain’s been struggling for some time. They’ve managed to tread water up until recently, though, and things started looking especially bad in June, according to CNN:

Digital Domain wasn’t able to get out of the hole quickly enough. As of June 30, the company had assets of $205 million and debts of $214 million. In August, it had hired Wells Fargo to advise on “strategic alternatives” for the business.

Last week, Digital Domain officially announced a major restructuring that included the resignation of CEO John Textor. The company also shuttered its Port St. Lucie, Fl., operations and fired most of the 320 employees based in that office.

The company’s film with Lionsgate based on the popular Ender’s Game franchise is still supposedly on track. Depending on the outcome of their bankruptcy, however, it might not be Digital Domain that profits from it. If the worst comes to pass, we might have to pour a virtual forty out for the Tupac Shakur hologram.