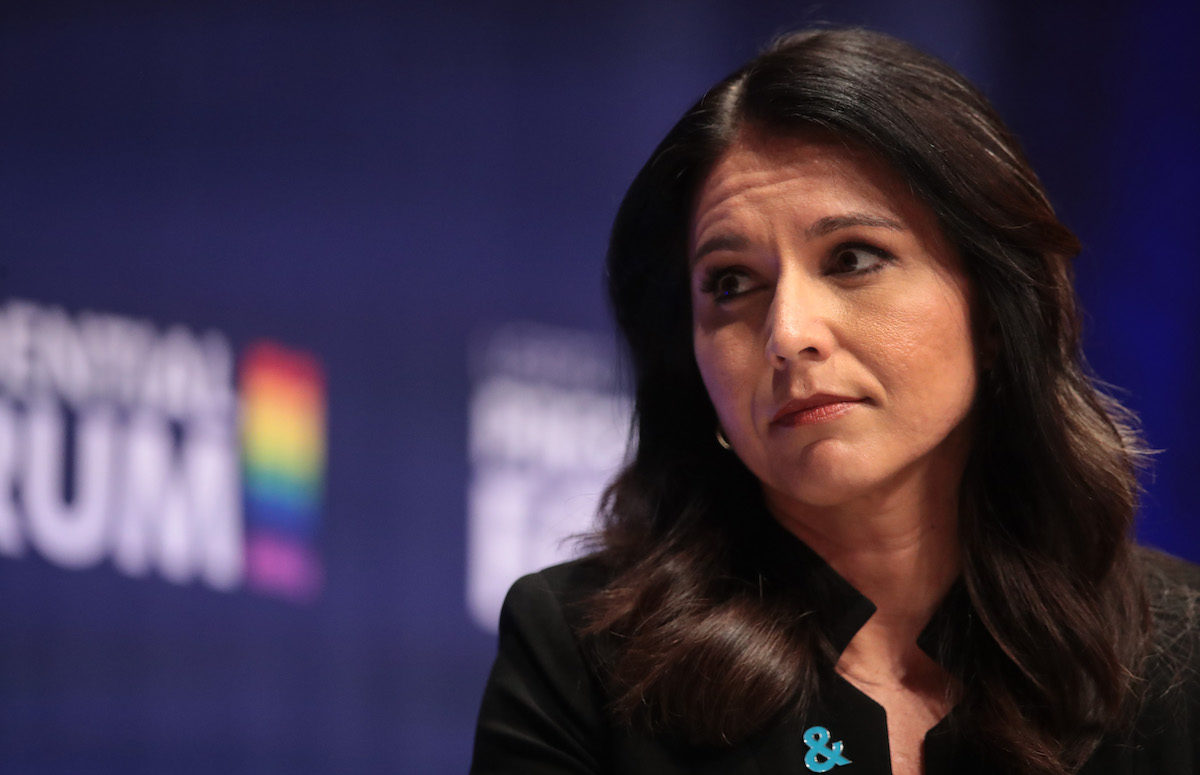 This week, Hillary Clinton appeared on Campaign HQ, the podcast from Barack Obama’s former campaign manager David Plouffe’s. During the talk, she suggested that Russia is still currently interfering in our presidential elections. To start, she believes the Russians might have compromising information of Donald Trump,

“I don’t know what Putin has on him, whether it’s both personal and financial,” Clinton said. “I assume it is.”

She also thinks some of (or at least one of) the Democratic nominees might be susceptible to their influence.

Clinton said she believed 2016 Green Party nominee Jill Stein was a Russian asset (which, to be clear, is not the same as a Russian agent or even indicative or any sort of cooperative efforts), and now she thinks Tulsi Gabbard is being used in the same way.

“They’re also going to do third-party again,” she said. “I’m not making any predictions, but I think they’ve got their eye on someone who’s currently in the Democratic primary and are grooming her to be the third-party candidate. She’s the favorite of the Russians. They have a bunch of sites and bots and other ways of supporting her so far.”

(Note 10/23: The New York Times (which was not the original source in this article) edited their original reporting to clarify that it was Republicans, not Russians who Clinton speculates are “grooming” a Democrat to run as a third-party candidate. However, she believes they are doing so because Gabbard, like Stein before her, is an asset to foreign agents looking to interfere in the election and sow discord here in the US. If you want to listen for yourself, this comes up around the 35:30 mark of the podcast, which you can listen to here or wherever you normally listen to podcasts.)

Clinton was in no way the first person to make this assessment. At the last Democratic debate, Gabbard said tat the New York Times had recently “put out an article saying that I’m a Russian asset and an Assad apologist, and all these different smears.”

That’s not exactly true, by the way. That article, in addition to noting that Gabbard has gained support from everyone from libertarians to white nationalists and professional conspiracy theorists, points to “the frequent mentions of Ms. Gabbard in the Russian state news media.” It did not suggest she was working with Russian agents.

Still, Gabbard did not take Clinton’s criticism too well.

Great! Thank you @HillaryClinton. You, the queen of warmongers, embodiment of corruption, and personification of the rot that has sickened the Democratic Party for so long, have finally come out from behind the curtain. From the day I announced my candidacy, there has been a …

… concerted campaign to destroy my reputation. We wondered who was behind it and why. Now we know — it was always you, through your proxies and …

… powerful allies in the corporate media and war machine, afraid of the threat I pose.

It’s now clear that this primary is between you and me. Don’t cowardly hide behind your proxies. Join the race directly.

I’ll just let Cory Booker respond for all of us here.

Meanwhile, some of the more fringe 2020 Democratic candidates are coming out with support for Tulsi.

The Democratic establishment has got to stop smearing women it finds inconvenient! The character assassination of women who don’t toe the party line will backfire. Stay strong @TulsiGabbard . You deserve respect and you have mine.

As a reminder, women can also be terrible and while many methods of attacking women are gendered, not every criticism of a womon is inherently misogynistic.

Andrew Yang also came out in support of Gabbard.

But for his fellow Alt Right totem ?

It was also very clear that a lot of the people supporting Gabbard weren’t actually people. That’s not to say she doesn’t have real supporters (even supporters who aren’t Richard Spencer followers), but the bots were out in full force. (Note: If an account’s user name ends in like six random digits, don’t even bother responding. Just mute, block, or ignore.)

I like a lot of what Andrew Yang has to say but the fact that the TrumpPutin bots are pushing him & Tulsi makes me very suspicious.

If you’re waking up on Saturday morning to see #IamTulsi trending, it’s because the Russian bots were busy last night trying to push Jill Stein 2.0 on us.

If she TRULY cares about America, Tulsi Gabbard should drop out.#TaintedTulsi

Tulsi: “I Am not a Russian asset!”
Russia: “They’re attacking the asset!”
Five seconds later on twitter:#IamTulsi pic.twitter.com/4BVRgQifjM

So we are suppose to believe that Gabbard is not a Russian asset when #IamTulsi magically started trending overnight while America was sleeping…
Russian bots didn’t do this… Not at all pic.twitter.com/ZctRWKMSzO