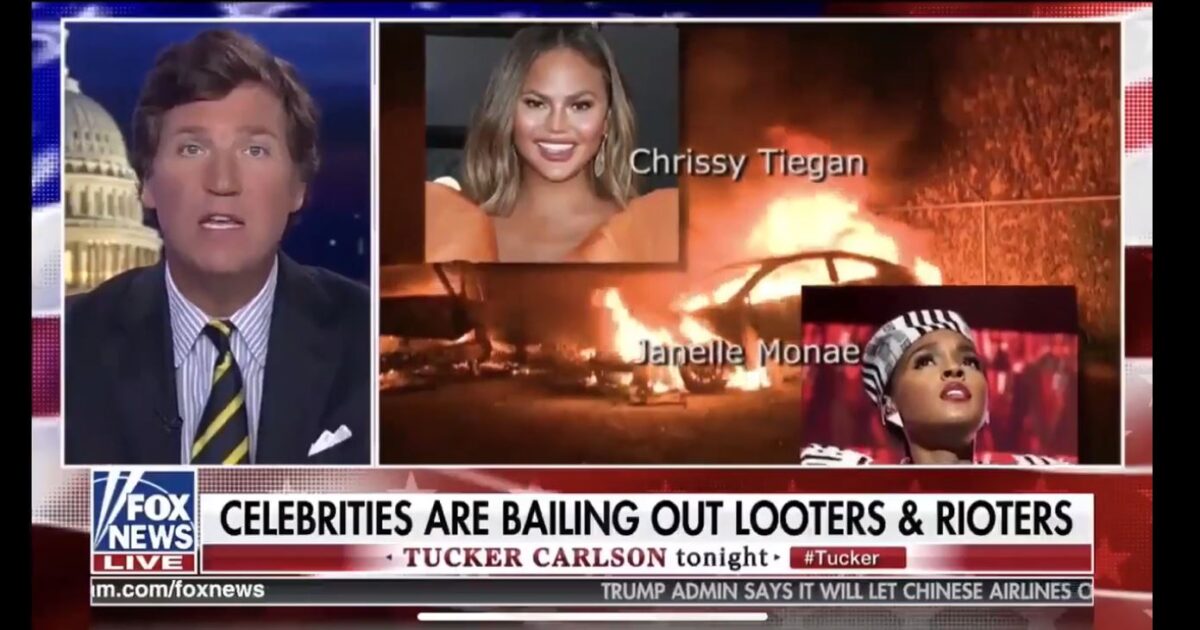 Carlson also railed against donations from “cynical, soulless, craven corporations” like Pepsi, Intel, AirBnB. The clip is wild, as Carlson clearly believes he’s exposing something negative about these celebs. Who is going to tell him that we love and support these celebs for helping free these crusaders for racial justice?

The clip is so out of touch and disconnected from our current reality. Does Carlson really believe we’re shocked to find out that *checks notes* COLIN KAEPERNICK supports the Black Lives Matter protesters?! Or that Fox News viewers have even heard of Kehlani? The shoddily assembled rogues gallery didn’t even bother to spell Chrissy Teigen’s name correctly.

In response, writer Jesse McLaren has edited the list of scrolling celebrities with new additions, including Blue from Blue’s Clues, Young and Middle-Aged Sheldon, and the Hamburglar. He also added a photo of a mustachioed Tucker Carlson dressed like the Riddler, with the name Cucker Tarlson.

I may have done some slight editing here. pic.twitter.com/O0Z4R7XgQ3

Meanwhile, the internet responded to Cucker’s segment by roundly roasting him on social media:

I think when white supremacists are bothered by your actions, that’s probably a good thing.

Tucker Carlson went after Chrissy Teigen but spelled her name wrong, and now "Cucker Tarlson" is trending. This night just keeps getting better.

Cucker Tarlson is trending – so be sure to check out this thread on the connections between his family's massive wealth and immigrant labor. And also – the long history of neo-Nazis and white nationalists who have once worked at his publication, the Daily Caller. https://t.co/XODwGWnFLC

I haven’t slept in 24 hours and thought I was hallucinating when I saw cucker tarlson trending. I’m in fucking tears

Cucker Tarlson is here to let us know which celebs are on the right side of history. https://t.co/TlPLpplU6x

Everything is awful right now, but at least we can enjoy the moment of pure levity that is Cucker Tarlson. Sorry dude, that’s new name now and forever.