Tucker Carlson Really Thought It Was a Good Idea To Insult Stacey Abrams and the Entire Romance Genre? 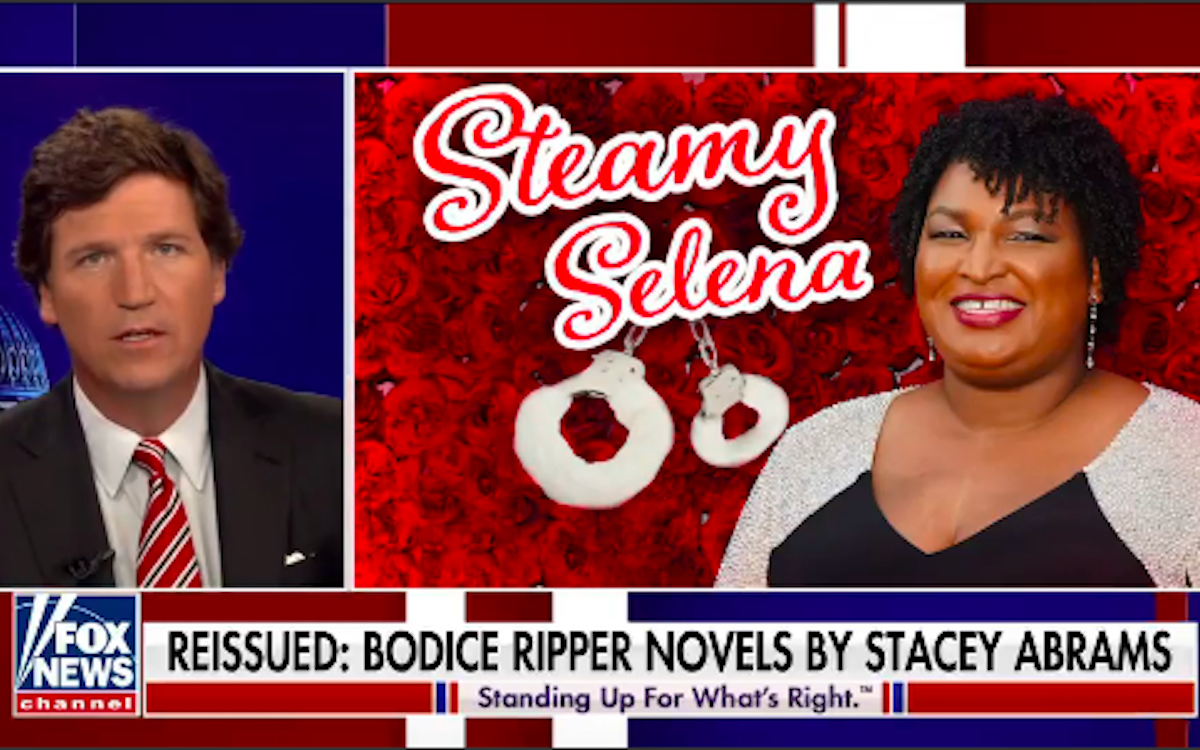 Tucker Carlson has had quite the week. In addition to getting absolutely obliterated by Joy Reid and seeing an old clip of Jon Stewart humiliating him go viral yet again, Carlson also thought it would be a good idea to come after both Stacey Abrams and the romance genre as a whole.

The three books—Rules of Engagement, The Art of Desire, and Power of Persuasion—were originally published under Abrams’ pen name, Selena Montgomery. The reissuing will be published under both her real name and her nom de plume.

Putting on a range of weird voices that I suppose are meant to convey general mockery, Carlson yelled, “BODICE RIPPERS, they call them—steamy, sexy!” Yes, in addition to being excellently written, Abrams’ books are both steamy and sexy, Tuck and I agree on that, although I’m able to admit it without putting on a silly voice.

“These days, Abrams is known for using phrases like ‘moral imperative’ and ‘equal justice’ but during her time as ‘Steamy Selena,’ she drew critical acclaim and got hearts fluttering apparently using words like ’embracing,’ ‘bending,’ ‘brushing,’ ‘voracious’ and ‘turgid,’ which means big,” Gallagher says inaccurately. He reads a few sentences from one of Abrams’ novels and the camera cuts back to Carlson giggling like a child.

Both Trace and Tucker seem to have a really hard time reconciling Abrams’ past as an author with her present career in politics. Maybe it would help if they recognized that that past/present divide doesn’t actually exist. Abrams started writing during her time in law school, and she has another book out next week. She is not a “romance writer turned political fighter” as Gallagher calls her. She is a woman who contains and has always contained multiple interests and talents simultaneously, and they all feed into one another. A person can be into both “moral imperatives” and “turgid” things at the same time!

Gallagher also stated that Abrams was trying to “gin up interest” in the rerelease by saying the novels showcase “women of color as nuanced, determined and exciting.” The implication there is that he doesn’t really believe that’s true, but that maybe Abrams is trying to appeal to her political fans, as if romance readers and political activists are two inherently separate demographics.

In reality, showcasing nuanced Black female characters was Abrams’ goal from the outset. She’s spoken previously about how that goal was an impediment to getting published but that it was essential to her writing so she found workarounds. It was actually the reason why she wrote romance novels to begin with–originally, she wanted to write books about espionage but was told that her stories, with her protagonists, wouldn’t find a home in that genre. So she switched to romance but “nuanced, determined and exciting” Black women were always the core of her writing, no matter what. That is not, as Gallagher crudely implied, a marketing gimmick thought up decades after the fact.

But these men are being reductive simply because they want to be. And we wouldn’t have expected anything else from them. But the ignorance on display here is out of control, both to assume Stacey Abrams was highlighting her diverse, fully formed characters as a political stunt and to snicker at an entire billion-dollar industry and the intensely passionate fans that come with it.