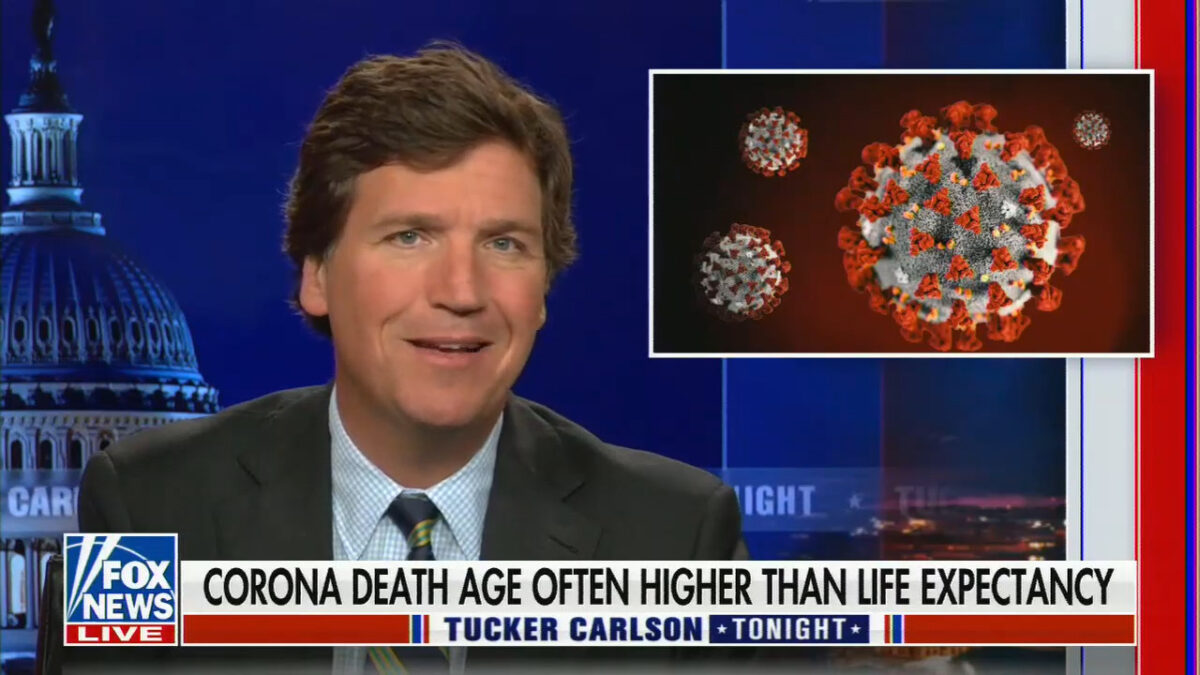 Yet again, Tucker Carlson has decided to open his mouth. We’re still in a time loop where people at Fox News keep trying to stop individuals from getting the COVID-19 vaccine even though it is proven to work/will help protect us from the Delta variants and other variations of the virus going forward. Carlson decided to take up his proverbial soapbox once again to say that we shut down civilization for a year for nothing because the mean age of those who died due to Coronavirus was older than life expectancy. Here’s the thing: What does that have to do with literally ANYTHING, Tucker?

Life expectancy is just the mean age of citizens at a given point. You can clearly surpass it or die younger than it. It’s just a gauge of where we are now versus the life expectancy of decades past. What Tucker Carlson is insinuating is that it’s okay that people who were older than the average life expectancy died because of COVID? Is that what I’m getting from this segment on Tucker Carlson Tonight?

“Do you think they hyped COVID a little bit? Yeah, they did,” he said in the most annoying voice I have ever been subjected to, and here’s where he’s wrong: It wasn’t overhyped. Those individuals would not have died if people just f**king FOLLOWED THE RULES. I’m sorry, I spent most of 2020 and this year flipping out and worrying about the health of my family. My parents are older (my mother healthy at 70 and my father going through chemo), and my older brother has diabetes. So I was very worried about them getting COVID and wanted them vaccinated as soon as possible. People like Tucker Carlson don’t care if my family lived or died from a disease that would not have spread in the U.S. as it did if people just did what they were supposed to and by wearing a mask and staying away from others when possible.

4 million people worldwide died of COVID-19, 606k of them from the United States alone. But to Tucker Carlson, that’s fine since the average life expectancy is lower than the mean age of who died? I ask very honestly: What the hell is wrong with Tucker Carlson?

This segment was brought on because Joe Biden said that it was time to make the priority for the vaccine those communities who haven’t had the ability to get theirs yet, whether that be due to distance or circumstance, maybe going door to door and offering the vaccine—not forcing people to get it but giving them the option. Frankly, force people at this point because I’m tired of being the one who has to suffer because people like Tucker Carlson can do whatever the hell they want.

“I mean no disrespect to the people who’ve died from this virus,” Carlson said before talking to Brit Hume, but yes, you do. Making your point requires disrespect, whatever you may say to the contrary. You’re acting like their deaths are just collateral damage and we should be able to live our lives without listening to science or doing our part. Just because the mean age is “older” than life expectancy, Tucker Carlson thinks that the rest of us shouldn’t be bothered if just older people are dying. That’s what his little spiel meant, so his claims that he meant “no disrespect” are false, even if he thinks it’s the truth. You are disrespecting those who died because their life doesn’t fit your narrative that COVID was overhyped. Their death was just an unavoidable part of life to you, even though Americans could have done something to prevent some of those deaths.

His excuse was that these are government numbers. Well, those numbers are also people. What I think is absolutely HILARIOUS is that Brit Hume points out that the pandemic was badly handled. Granted, I don’t agree with his idea of what we should have done, but the fact that he recognized that we should have protected the elderly and we did not? That was on Donald Trump. Of course, neither Hume or Carlson say that, but are we surprised?

Instead, they just yell about things they know nothing about and never bring up the fact that you can look at a country like New Zealand who completely shut down and had very little deaths because they took it seriously—which is the key to all of this that both Carlson and Hume are ignoring: other countries took it seriously. The Trump administration and all the Americans who believed him did not. So our death toll continued to rise unnecessarily because people wouldn’t wear masks or do what they were supposed to because Trump mocked it.

Tucker Carlson talks about a 15-year-old getting a shot as if it’s weird to be vaccinated to go to school. Um … I don’t know about Tucker, but in order to go to public school, I had to have all my vaccinations. It’s a normal thing. This is just another one added to the list. “The idea that you would force people to take medicine that they don’t want or need,” Tucker says, and … there’s a few things wrong about that. No one is FORCING you and maybe that’s the problem, and also you do need it. Otherwise, you’re very vulnerable for COVID-19. At the end of the segment, Tucker mutters something about not letting kids get an education if they’re not vaccinated and, AGAIN, that’s not a new thing. We all had to do it in the ’90s, at least where I lived, and I survived.

Now that I’ve screamed about this segment, let me compile my final thoughts. Mainly, it’s just that Tucker Carlson has no idea what he’s talking about and tries to sound intelligent when in reality, he’s spreading harmful rhetoric to his audience. And what’s sad is that his audience is the kind of people who believe this crap. They’ll watch him and go, “See!? The vaccine is dangerous” when Tucker Carlson never really said that. He made it seem like the vaccine was unnecessary, which is false and dangerous in its own way, but he also gaslit those listening to him into thinking that only the elderly are vulnerable.

Again, incorrect. There are plenty of underlying conditions that make COVID-19 dangerous for other people. There are plenty of people who were seemingly healthy and got COVID and struggled to make it through. A good example of how dangerous this disease is Nick Cordero. The healthy Broadway performer died a few weeks after the disease and had a VERY rough struggle with COVID. He was not in Tucker’s “past the age of life expectancy” category, but I’m sure Tucker Carlson would say it was sad but oh well.

I hate having to talk about this man. I hate having to report on Fox News. But letting them spew this kind of thing unchecked is dangerous. They’re going to get people killed and they clearly don’t care because if they did, they would not keep letting Tucker Carlson say whatever he wanted.