No, Tucker Carlson, You Can’t Have Elizabeth Warren’s Economic Plan Without “Identity Politics” 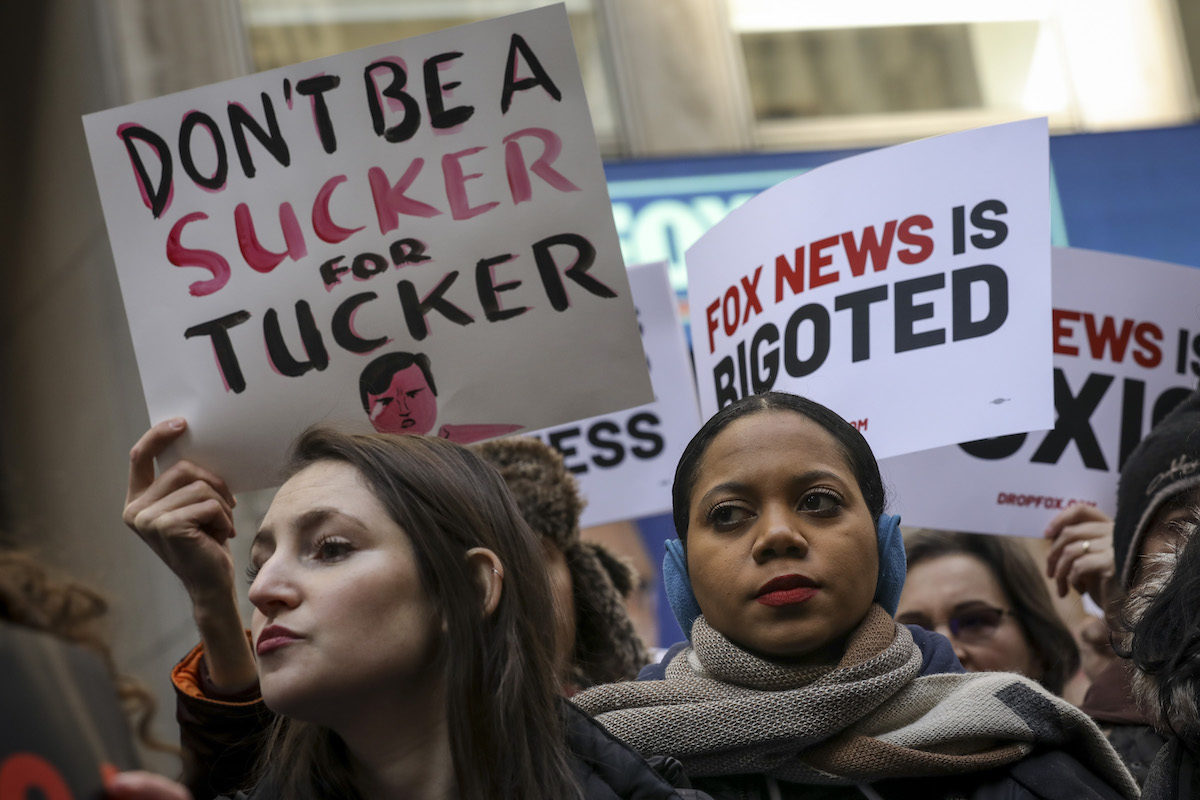 Last night, Elizabeth Warren did a town hall event hosted by MSNBC’s Chris Hayes and first of all, if you watch nothing else from the event, please watch this clip of Warren explaining why Joe Biden is wrong in his support of the Hyde Amendment. It’s an important, emotional 90 seconds and she is 100% spot-on.

Anyway, meanwhile, over on Fox News, where Warren has explicitly refused to appear, Tucker Carlson was doing a “thought experiment”–a real challenge for him, I’m guessing. On his show, he read verbatim large parts of Warren’s recently released “Plan for Economic Patriotism.”

“I’m deeply grateful for the opportunities America has given me, but the giant American corporations who control our economy don’t seem to feel the same way,” he read. “They certainly don’t act like it. Sure, these companies wave the flag, but they have no loyalty or allegiance to America.” He read her naming of iconic American brands (Levi, GE, and Dixon Ticonderoga, “maker of the famous №2 pencil”) that have outsourced all or nearly all of their operations to other countries.

“Politicians love to say they care about American jobs,” Carlson read. “But for decades, those same politicians have cited free market principles and refuse to intervene in markets on behalf of American workers. And of course, they ignore those same supposed principles and intervene regularly to protect the interests of multinational corporations and international capital.” Warren writes of the “millions of good jobs lost overseas and a generation of stagnant wages, growing inequality and sluggish economic growth” and how the American government has the power to change this but won’t out of service to “multinational companies and international capital, with no particular loyalty to the United States.”

“We can navigate the changes ahead if we embrace economic patriotism, and make American workers our highest priority, rather than continuing to cater to the interests of companies and people with no allegiance to America,” he concludes quoting.

Carlson then asks his audience, “What part of the statement you just heard did you disagree with? Was there a single word that seemed wrong to you? Probably not.”

“Here’s the depressing part: Nobody you voted for said that or would ever say it,” he says before giving the big reveal that these words belonged to Warren.

On the surface, Carlson’s support of Warren seems remarkable, like a Ted Cruz/AOC-level political crossover. The fact that Carlson said Warren “sounds like Donald Trump at his best” with this plan is repulsive and nonsensical. But we have to remember that Carlson’s man of the people act is a masquerade, used here to set up a bait-and-switch of his usual brand of patriarchal bigotry.

Every few months Tucker Carlson will do something like this. He’s never actually endorsing these policies. It’s bait. https://t.co/vTvGePO1eY

Because right after Carlson praises Warren’s economic populism, he uses that plan as a line in to rail against identity politics.

“There’s not a word about identity politics in the document. There are no hysterics about gun control or climate change. There’s no lecture about the plight of transgender illegal immigrants. It’s just pure, old-fashioned economics — how to preserve good-paying, American jobs.”

Warren’s policies would work because they’re all connected. Carlson’s praise for “pure, old-fashioned economics” is praise for the ultimate identity politics: insisting we remove issues of systemic discrimination, shifts toward sustainable energy or new technology, and anything that isn’t specifically tailored to the white male experience because that’s still what’s seen as a neutral, baseline existence.

Elizabeth Warren is never going to be that candidate. She’s made it clear that she believes we as a country cannot achieve any sort of success if it comes at the expense of oppressing marginalized people. That’s how we ended up here in the first place.