Montana Man Lives the Dream, Gets To Tell Tucker Carlson off to His Face

“You are the worst human being known to mankind." 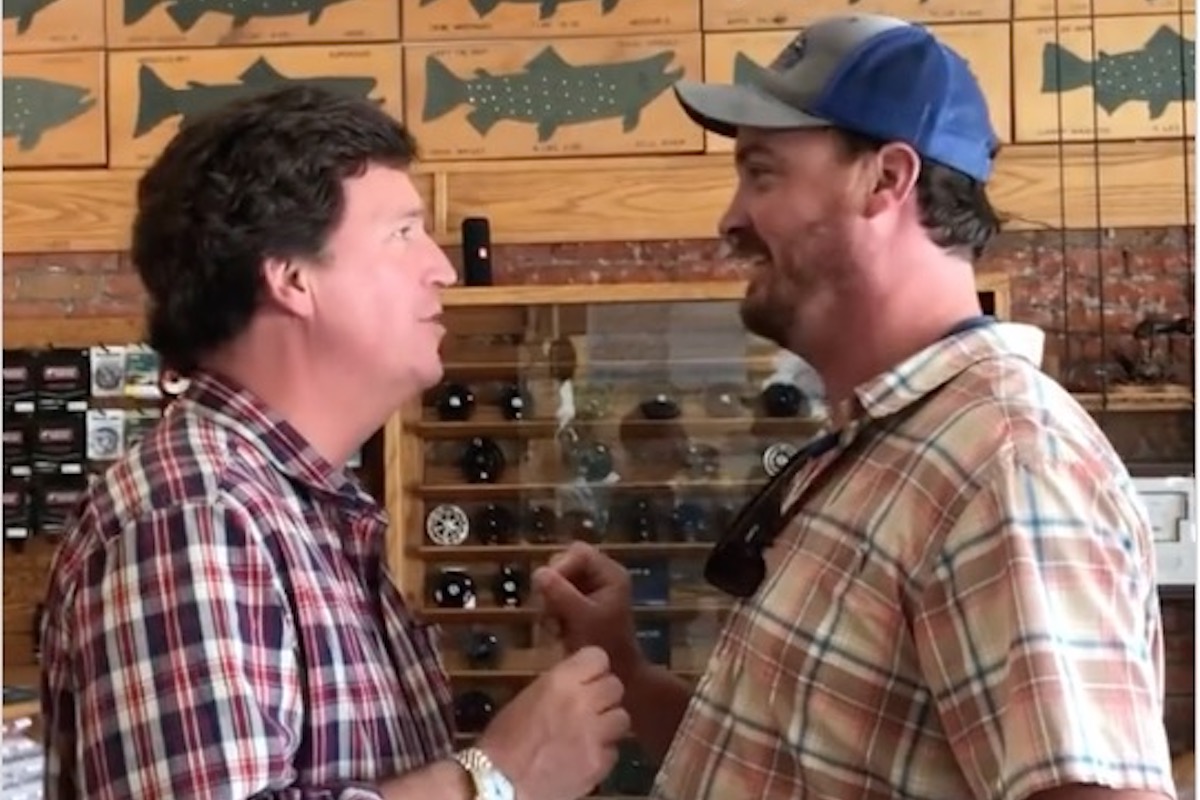 Over the weekend, one man in Livingston, Montana got to live the dream of telling Tucker Carlson exactly what he thinks of the cosplay newsman, right to his face.

When Dan Bailey saw Carlson inside of Dan Bailey’s Fly Shop (no relation, as the store made clear via a statement on its website), he did not hold back. “You are the worst human being known to mankind. I want you to know that,” Bailey tells Carlson in a video of the encounter posted to his Instagram page.

Bailey isn’t trying to make a scene. He speaks intensely but quietly. The men are standing just inches from one another and both are smiling in that almost manic way that signifies an awareness of the absurdity of your situation rather than anything resembling actual happiness. When Carlson realizes he’s being filmed, he cackles, possibly because he knows he’s about to go viral yet again.

Bailey captioned the video: “It’s not everyday you get to tell someone they are the worst person in the world and really mean it! What an asshole!”

Tucker stans have flooded Bailey’s Instagram page, filling the comments on every post with personal insults. They’ve also flooded the account of a woman who appears to be Bailey’s partner, posting vicious comments about her physical appearance on photos dating back six months and older. Nothing says patriarchy like cruelly insulting a woman’s appearance as a way to attack her male partner for reasons completely unrelated to her existence.

If only those trolls listened to the urging of Carlson’s home network of Fox News. In a statement to Mediaite, the network condemned “accost[ing]” people over politics.

“Ambushing Tucker Carlson while he is in a store with his family is totally inexcusable — no public figure should be accosted regardless of their political persuasion or beliefs simply due to the intolerance of another point of view,” the statement reads.

To start, remember when Tucker told his audience to confront people wearing masks in public? We sure do!

This is an interesting position for Fox to take considering Jesse Watters’ past behavior and Tucker himself telling viewers to harass people for wearing masks and call the cops on parents of mask-wearing kids because “fighting back is the only option”https://t.co/FuqyeHxikg

Technically, Fox News’ statement specifically says “public figures” shouldn’t be accosted. Except their own employees have routinely done that, too.

This is total BS. Jesse Watters waited outside my house, followed me when I left my driveway, and accosted me with a camera and microphone when I parked my car on a personal errand. The hypocrisy here is stunning. https://t.co/kCYvt7NNS2

My understanding is he made his career with this type of confrontation on (checks notes) Fox News.https://t.co/Nv4XcwTBRb

Also, despite what Fox News says in their statement, this is not about Carlson’s “political persuasion.” This isn’t because he’s a conservative. It’s because he’s an actual danger to the public.

As Bailey says in his Instagram caption for the video of the encounter, “This man has killed more people with vaccine misinformation, he has supported extreme racism, he is a fascist and does more to rip this country apart than anyone that calls themselves an American.”

If you spot that kind of danger out in the world, I don’t see anything “inexcusable” about calling it what it is.

(image: screencap)
Want more stories like this? Become a subscriber and support the site!