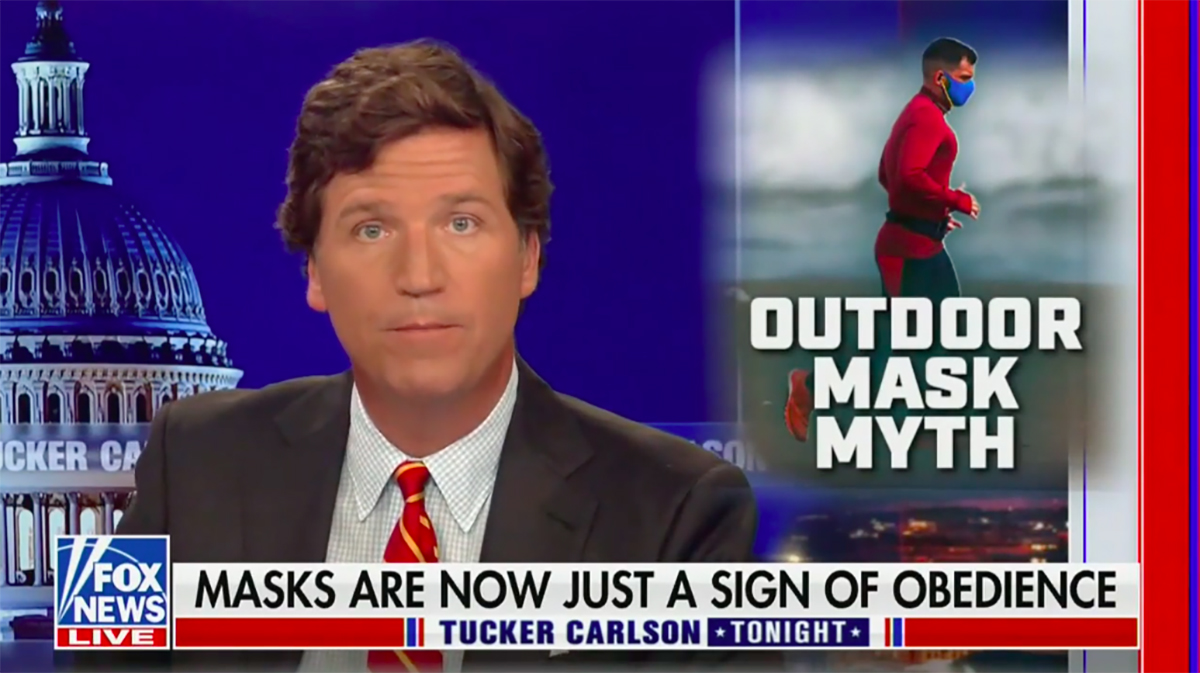 Tucker Carlson wants his viewers to mock and harass people wearing masks because Tucker Carlson is that bully on the playground who gets his little posse of brutes to make meaningless jokes about everyone to feel better about themselves. Listening to Carlson makes my ears cave in on themselves, but his most recent tirade is worth noting.

Carlson is, for the most part, telling his base to attack those wearing masks in outdoors. I don’t know about you, but I’m not a selfish human. So, when I’m fully vaccinated, I plan on still wearing my mask for those who are not vaccinated yet. Should I give that grace to people who listen to Carlson? Probably not, but I’d rather not have their death on my conscience. I’ll leave that to Carlson and those at Fox News.

Masks have always been incompatible with a free society. We used to know that. Masks strip people of their identity as individuals, transform people from citizens into drones. They isolate us and alienate us to shut us off from one another, they prevent intimacy and human contact. If I can’t see your face, I can’t know you.

Now, I don’t know about you, but I’ve had some FUN with my masks. You can spot me from a mile away because my masks are all things I love. From Spider-Man’s mask to random pictures of Robert Downey Jr. or Din Djarin with Grogu, they’re all things I love because I figured that if this was the new normal for a while, I might as well put my personality into it. For Carlson though, you’re stripped of your identity.

According to Carlson, they “isolate” us. Well, the only way I’ve been able to see my friends recently is with my masks. Otherwise, I’d be stuck in my apartment with just my cat and my best friend and my non-stop marathon of The Nanny.

So what did Carlson then do? He decided to tell his audience of Fox News Zombies to snort at us for wearing masks:

The rest of us should be snorting at them first. They’re the aggressors. It’s our job to brush them back and restore the society we were born in. So the next time you see someone in a mask on the sidewalk or on the bike path, do not hesitate. Ask politely but firmly, “Would you please take off your mask? Science shows there is no reason for you to be wearing it. Your mask is making me uncomfortable.”

Don’t worry. It got worse:

We should do that and we should keep doing it until wearing a mask outside is roughly as socially accepted as lighting a Marlboro on an elevator. It’s repulsive. Don’t do it around other people. That’s the message we should send because it’s true.

Think that’s as far that Carlson would go? THINK AGAIN! He also encouraged his millions of fans to call PROTECTIVE SERVICES if they see children with masks on outdoors during a pandemic:

As for forcing children to wear masks outside, that should be illegal. Your response when you see children wearing masks as they play should be no different from your response to seeing someone beat a kid in Walmart. Call the police immediately. Contact Child Protective Services. Keep calling until someone arrives. What you’re looking at is abuse. It’s child abuse, and you are morally obligated to attempt to prevent it.

Every time the right says that “liberals” are aggressors or are violent, I just think about the fear I have around people in a red hat or without masks on. I know not to say anything and, instead, put distance between myself and them. But with Tucker Carlson inciting his base of millions of Americans to get aggressive to those of us taking a pandemic seriously? It’s going to be a mess, and Fox News is responsible for whatever danger Carlson continues to pose to America.