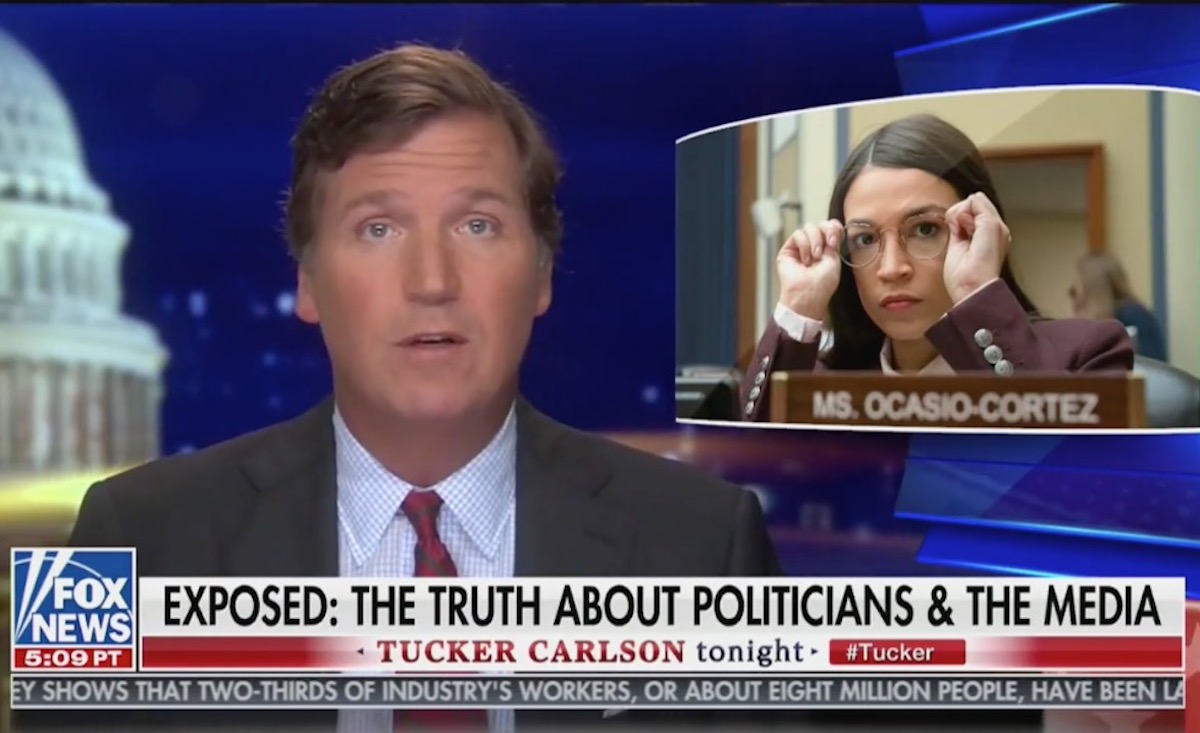 During his show Monday night, Tucker Carlson took aim at Alexandria Ocasio-Cortez, one of his longtime favorite targets, calling her–I kid you not–a “child of privilege.”

Carlson was complaining that certain liberal politicians and media figures are talking about themselves too much during the pandemic. “Certain people would like to use this moment to elevate themselves and crush you,” he told his audience right after criticizing MSNBC’s Joy Reid for “whipping people into a frenzy of paranoia and hate.”

“The most consistent byproduct of privilege, always and everywhere, is narcissism,” Carlson said, claiming that’s why our “pampered overlords cannot shut up about themselves.”

According to Carlson, AOC is a perfect example of this because of that whole “child of privilege” thing. He says “Alexandria Ocasio-Cortez doesn’t make sense as a person until you learn she grew up as ‘Sandy Ocasio’ within the affluent suburb of Westchester. Then went on to get a silly pointless degree at a silly pointless private college.”

“Of course she did! It’s so obvious!” Carlson went on to screech. “Someone who actually grew up in the Bronx would be far too embarrassed to drone on about herself on Instagram,” he added, as if he is in any position whatsoever to say what people from the Bronx would or would not do.

I would say I can’t believe we’re playing this game again but of course I can believe it. It’s so obvious.

Let’s not waste time rebutting such a superficial, bad-faith argument, especially since we went through all of this back in 2018 when all these conservative pundits thought they’d uncovered AOC’s “secret privileged past.” This sums it up pretty well:

2. It is nice. Growing up, it was a good town for working people. My mom scrubbed toilets so I could live here & I grew up seeing how the zip code one is born in determines much of their opportunity.

3. Your attempt to strip me of my family, my story, my home, and my identity is exemplary of how scared you are of the power of all four of those things.

To be talking about privilege and narcissism like this, who does Tucker Carlson think he is? That’s not rhetorical, I genuinely want to know–does he not know who he is? How on Earth does he think everything he’s saying doesn’t apply to him a hundred times over? Carlson’s stepmother is the heiress to the Swanson frozen food empire. His father is a media giant and former ambassador, which must have come in handy after Carlson reportedly got rejected from pursuing the path he wanted at the CIA and turned to journalism as a consolation career.

Millionaire frozen-food heir Tucker Swanson McNear Carlson, currently hosting a primetime cable news show after getting fired by two other networks, has a lot of thoughts on privilege https://t.co/eI0UWU8sTn

Also, I’m not sure how “silly” and “pointless” AOC’s degrees in international relations and economics are. They seem pretty relevant for a member of Congress. I wonder if Carlson thinks his degree in history from a private college is also silly and pointless.

Carlson’s rant about Ocasio Cortez’s “privilege” comes shortly after his Fox News colleague Laura Ingraham mocked her for her background in bartending. So which is it? Is she disqualified from having opinions because she’s too privileged or because she’s too working class? Just kidding, we know the answer. It’s neither, or both, or it’s any other straw they can grasp for at any given moment as they attempt to discredit and silence her.

(via The Daily Beast, image: screenshot/Fox News)
Want more stories like this? Become a subscriber and support the site!