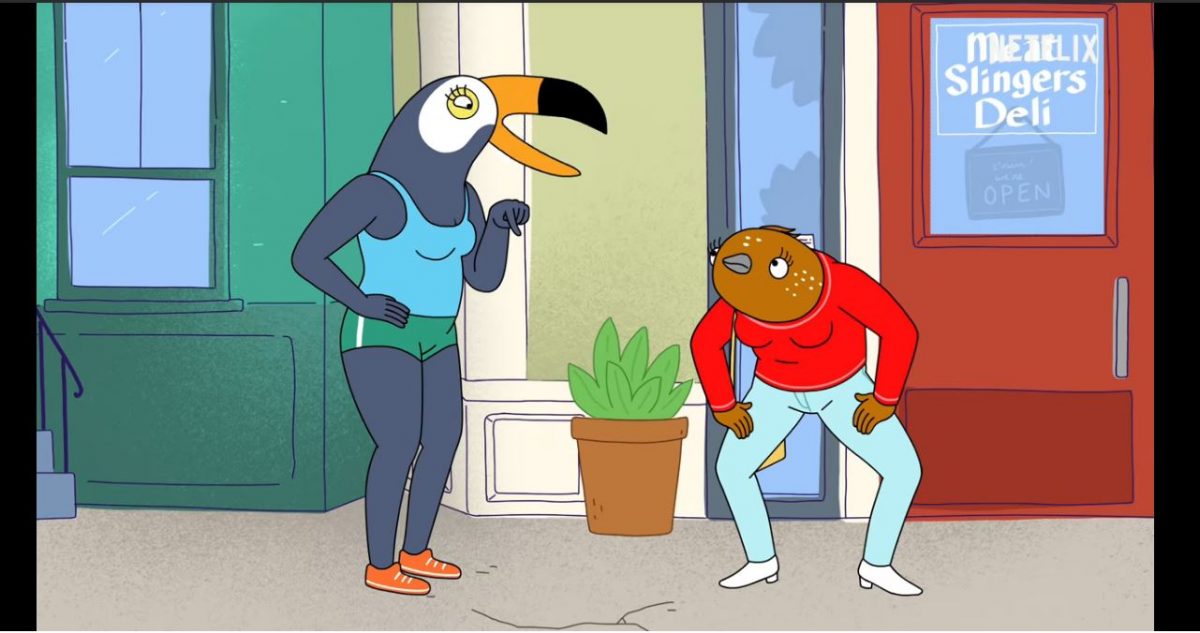 Fans of BoJack Horseman will no doubt want to tune in to Tuca & Bertie. The show is executive produced by BoJack creator Raphael Bob-Waksberg and created by the show’s production designer and illustrator Lisa Hanawalt. In addition, the series is another animated adult comedy starring anthropomorphic animals. But the similarities end there.

Tuca & Bertie is a psychedelic, colorful and quick-moving comedy that veers away from the deep and depressing themes of its predecessor. It’s clear from the pilot that Hanawalt’s new series offers a louder, cruder world with a whimsical flair. This is thanks in no small part to the delightfully trippy additions to Bird Town, a New York City style metropolis that features talking plant women, mushroom beings, and transportation via a giant snake standing in for the subway.

The series follows two 30-year old bird best friends: Tuca (Tiffany Haddish) a loud and irresponsible toucan and Bertie (Ali Wong), a shy anxious song thrush who works for Condé Nest (there are bird puns aplenty throughout the series) and dreams of becoming a pastry chef. The series begins with Tuca having just moved out of their shared apartment, as Bertie moves in with her mild-mannered boyfriend Speckle (Steve Yeun).

The series is truly the spiritual successor to Comedy Central’s Broad City, with both shows centering on a co-dependent female friendship filled with shenanigans. Tuca & Bertie also pays tribute to the long legacy of television odd couples before it: the wild party animal and the conservative responsible wallflower. It’s a formula that always clicks, and Wong and Haddish have terrific chemistry as the two best buds.

But like BoJack Horseman, Tuca & Bertie is not afraid to explore darker, more complex themes. The series explores sexual harassment in the workplace, addiction, and anxiety with its idiosyncratic brand of heartfelt humor. When Bertie is harassed by a co-worker, her left breast (voiced by Awkwafina) pops out and escapes her body and goes out for a drink.

The series features playful and inventive animation to build the world of Bird Town, dipping into stop-motion and puppetry for experimental asides and explorations. Everything in Tuca & Bertie seems to be grooving to their own rhythm: plants, buildings, and snacks are undulating to their own beat, making for a visually arresting feast for the eyes.

The series also focuses on an under-served age range: women in their early thirties. Like Netflix’s recent film Someone Great, Tuca & Bertie explores the expectations of adulthood that come after your wild and irresponsible twenties. For women, those expectations include a career, a stable relationship, and a family, that often come with a ticking clock.

If you can’t get enough of onscreen duos, Tuca & Bertie provides an imaginative and hilarious exploration of growing up and flawed female friendship.