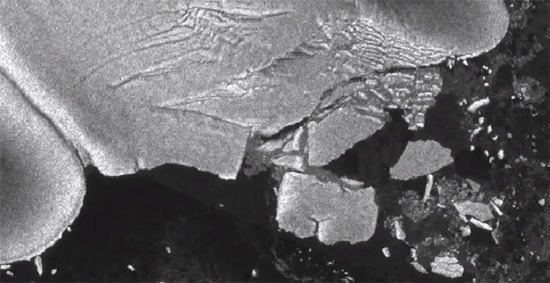 As Japan continues to rebuild after March’s devastating Tohoku earthquake, the broader effects of the subsequent tsunamis are still being sorted out. One of the most dramatic discoveries comes from scientists at NASA. Hoping to observe the effects of the earthquake on sea ice, researchers noticed several large icebergs floating off the Antarctic coast where there had been nothing but solid ice before. Sifting through their satellite data, it became clear that waves generated by the earthquake broke several large icebergs were loose from Antarctica’s Sulzberger ice shelf.

The scale of the event is truly staggering: the waves traveled some 8,000 miles striking Antarctic ice 18 hours after the quake, eventually breaking off 50 square miles of ice. One of the icebergs was apparently the size of Manhattan. Amazingly, scientists were able to find imagery of the ice mass in a photo taken of the ice shelf in 1965. This showed that the ice had been intact for nearly 50 years.

Check out the amazing video below from NASA’s Goddard Spaceflight Center.