Trump’s Empty Praises for Muhammad Ali Fly in the Face of Ali Jr.’s Questioning at a Florida Airport 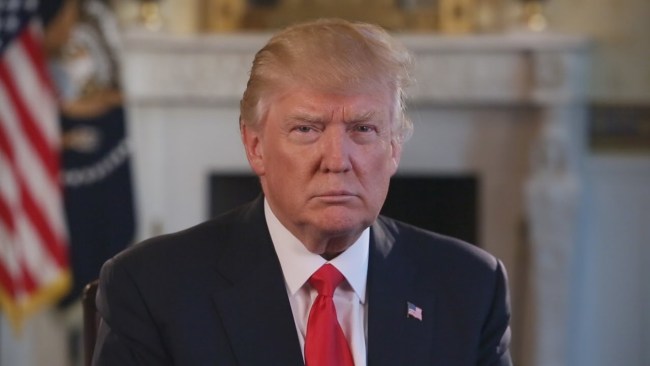 President Donald Trump has taken his time to venerate Black History Month, musing about his visit to the National Museum of African History and Culture in Washington, D.C.

“It tells of the great struggle for freedom and equality that prevailed against the sins of slavery and the injustice of discrimination.” Commendable weekly address. For those gracious words, he has earned himself a cookie to share with the white supremacist he hired.

Here, while also name-dropping Martin Luther King Jr. and Frederick Douglass, Trump had the gall to praise the late boxing legend, who he somehow forgot about when thinking of Muslim athletes in 2015.

Obama said in his speech that Muslims are our sports heroes. What sport is he talking about, and who? Is Obama profiling?

So the commander-in-chief muses to the camera, “There’s a great quote by Muhammad Ali, ‘I shook up the world.’ … Every day, I pledge to continue that march so that every American, no matter his background, no matter her background, has the chance to climb that great ladder of success.”

At the Fort Lauderdale Hollywood Airport, after returning from a Black History Month event, Muhammad Ali Jr. and his mother were greeted by the security. “Where did you get your name from?” The American native was asked by security. This baffled the son of the late famed Muslim boxer. “Are you a Muslim?” This was the first time he was stopped due to his religion. For two hours, he found himself detained and separated from his mother.

This exemplifies the effects of the Executive Order 13769 of January 27, 2017, a.k.a, the Muslim Travel Ban. Even if the national frenzy of the Ban had been lifted, the aftershocks remain.

More chilling, this event is rather prophetic of the late Muhammad Ali’s words in 2015: “We as Muslims have to stand up to those who use Islam to advance their own personal agenda. They have alienated many from learning about Islam.” Instead of protecting Muslims from discrimination, Trump perpetuated it.

An interviewer asked Ali Jr. the hypothetical apology: What if Trump was to apologize for the Muslim Ban?

Thousands of Muslims Americans would like to say the same. With Trump about to send out a revised executive order, a Muslim Ban 2.0, the question will repeat itself. As Trump self-congratulates himself for praising Black History Month and a Muslim figure, he and his cabinet constantly find it in themselves to make discrimination a destiny for its Muslim American citizens.