The Good & the Bad of Donald Trump's Demand for ,000 Stimulus Checks | The Mary Sue 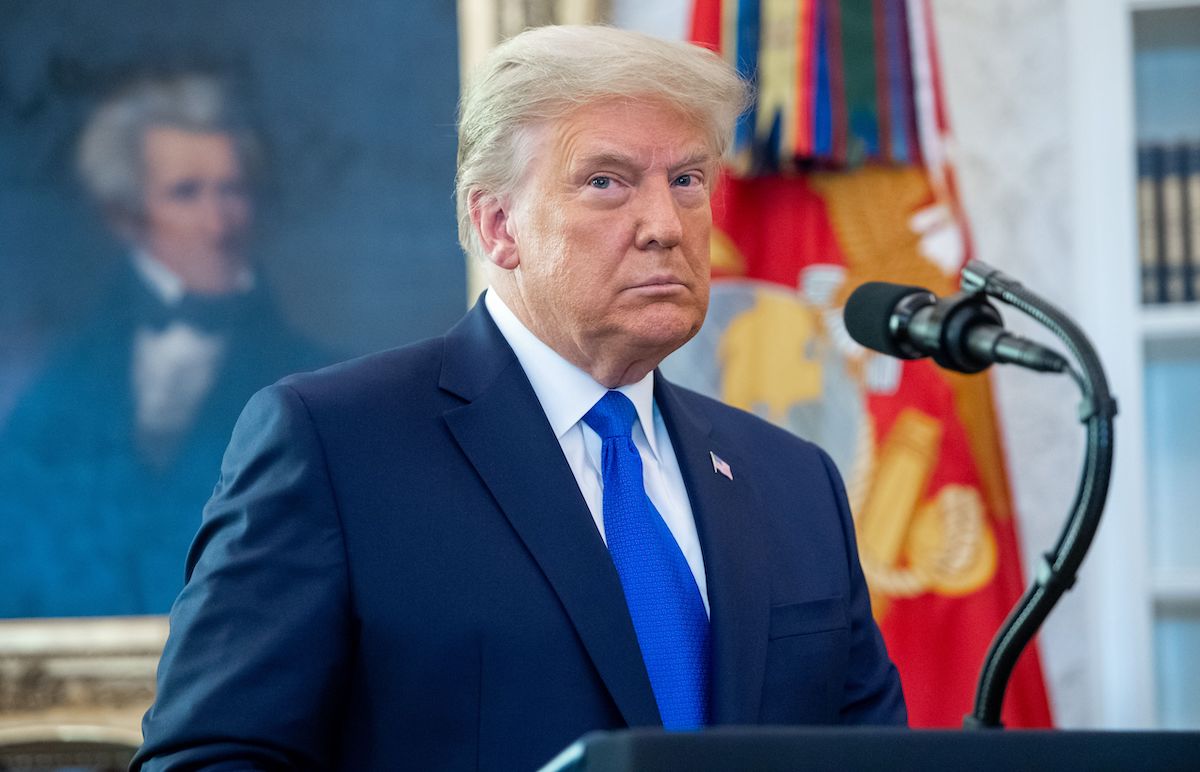 In a video posted to Twitter Tuesday night, Donald Trump indicated that he might be planning to veto the COVID-19 stimulus bill that Congress has spent nine months negotiating. He didn’t use the v-word but he did call the bill a “disgrace” and said that it needs to include bigger payments for Americans than the planned $600 checks.

“I am asking Congress to amend this bill and increase the ridiculously low $600 to $2,000, or $4,000 for a couple,” Trump says in the video. He also demands that the gross “three-martini lunch” corporate meal tax break be made permanent. (As is in the bill, it expires in two years.)

First off, let’s look at the upside of this video. Yes, $600 is a “disgrace.” It only took four years (plus his campaign, plus every year before that) but I actually agree with Donald Trump about something.

So many people are struggling financially after nearly a year of job losses and insecurity, medical bills, back rent, and all the other ways in which this terrible year has impacted our lives that $2,000 still isn’t enough for all that, but it’s definitely better than $600. It’s enough to make a real difference for a lot of people.

Rep. Alexandria Ocasio-Cortez tweeted that she agreed with Trump, too, and said she and Rep. Rashida Tlaib had already drafted text for the amendment so let’s make this happen!

Let’s do it. @RashidaTlaib and I already co-wrote the COVID amendment for $2,000 checks, so it’s ready to go.

Glad to see the President is willing to support our legislation.

We can pass $2k checks this week if the Senate GOP agrees to stand down. https://t.co/GprwrUPali pic.twitter.com/nFFs1ExqCK

Okay, now the not-so-great side of Trump’s request/demand for larger payments.

First of all, he starts out by blaming Democrats in Congress for the small checks. He says they “cruelly blocked COVID relief legislation” in order to advance an “extreme leftwing agenda” and also “influence the election.” None of that is true. Democrats have been pushing for more money in direct payments while Republicans have been fighting against them, focusing almost entirely on corporate tax breaks.

I’m also not sure how he thinks blocking a relief package would help Democrats in the election. Maybe he’s implying that they thought the lack of direct funds would make him look bad (which it has, but that’s not the Democrats’ fault), but of course he found a way to tie lies about Democrats and COVID-relief to lies about nonexistent election fraud. They are lies but there are plenty of people who will believe him.

In that same vein, he made some strange allusions to possibly staying in office after January 20th. If Congress doesn’t fix the bill to his liking, he said, “the next administration will have to deliver a COVID relief package, and maybe that administration will be me.”

Trump knows that the lack of a stimulus package reflects poorly on him—that’s why he’s blaming the Democrats and why he fought so hard to have his name on the first round of checks. By that logic, a second, larger check would have to make him look good, right? Good enough to get the public to support the stupid, slow-moving coup he’s been pushing? I sure hope people can’t be that swayed by an extra $1400 but who knows.

awakened worrying trump is using the $2000 paycheck dangle as a way to blackmail congress into jan 6th shenanigans.

Trump’s threat to veto the COVID-19 relief bill also has much larger implications. If Congress can’t agree to new terms, not only will people have to wait on those direct payments, another round of small business loans, supplemental unemployment, and everything else included in the package, but this bill is tied to a massive $1.4 trillion “omnibus” government funding bill. Congress has already given themselves an extension to pass that bill, but they’ll need to do so within just a few days to avoid a government shutdown.

Amy Klobuchar went on Rachel Maddow’s show to talk about Trump’s hijacking of the relief package and while I think she was trying to express concern for the risk of missing that deadline, her wording was really poor.

Amy Klobuchar just went on MSNBC to call raising the stimulus to $2,000 per person “an attack on every American” and suggests Congress override Trump’s veto. pic.twitter.com/mEdDUY9dNu

Adding another wrinkle to all of this, Nancy Pelosi tweeted that she wanted to bring this $2000 amendment to the House floor by “unanimous consent.” That’s different from a regular vote because it’s an expedited procedure (yay!), but a single no vote would kill it immediately (oh no). And with the exception of my own terrible broken clock senator Josh Hawley who recently teamed with Bernie Sanders on an amendment for larger checks, Republicans (again, not the Democrats, no matter how many times Trump says otherwise) are not likely to go for this.

Hopefully, the added pressure of having such a harsh spotlight on this one single decision, without being wrapped up in omnibus negotiations, will be enough to get them on board.