Voter suppression is kind of the Republican party’s thing, but even some among their ranks have balked at Donald Trump’s claims of widespread voter fraud—which he says is how he lost the popular vote—and his plans to deal with the nonexistent problem. Now, those worried about the administration’s care of voter data is somewhat vindicated by information released from public comments on the commission.

That’s not exactly surprising, considering it was part of the disclaimer on the Commission on Election Integrity’s (pause for laughter) website, reading, “Please note that the Commission may post such written comments publicly on our website, including names and contact information that are submitted.” But there’s no reason for that. They could have easily posted the comments while redacting such identifying data … unless the goal was to scare people out of commenting.

Although, it decidedly did not scare people, it seems, based on the responses that were published by the commission. Many of them are incredibly and deservedly abrasive, and only a few of them contain more identifying information than a name (although that alone is unnecessary), but some of them contain email addresses, website addresses, and even home addresses.

Some of them truly are great comments that boost our faith in humanity, too: 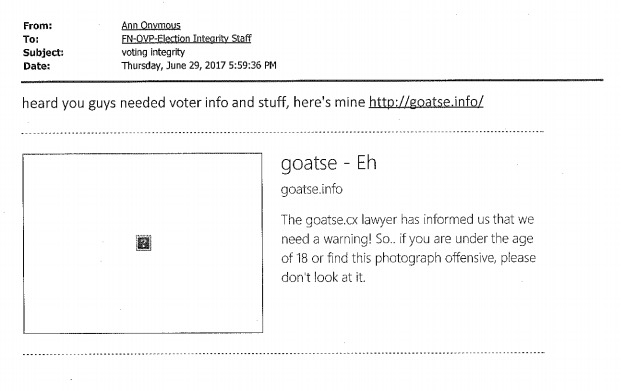 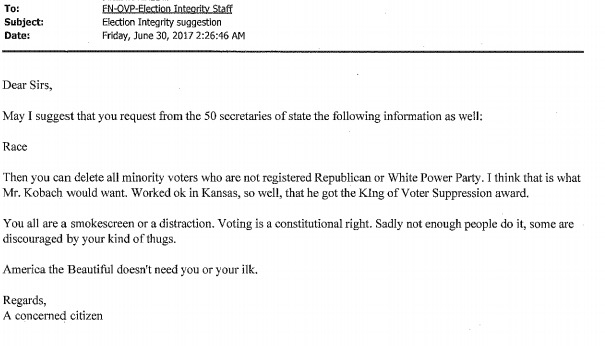 Despite their disclaimer, and how much we truly loved reading some of these comments, that’s not exactly comforting when one of the chief concerns over the committee is potential mishandling of voter data. Sure, they were warned this would happen, but it still shouldn’t have. The ACLU is already suing the Trump admin over the committee, and many states have either told the commission to take a hike outright or only agreed to provide data that’s already publicly available. It seems that was the right call to make in response to the commission’s request that states hand over extensive voter data, since they couldn’t even be bothered to do citizens a solid and delete their addresses before publishing their comments online.

The comments are also overwhelmingly negative about the commission, whether because there just aren’t enough people willing to support it or because they just wanted to publish the names of people who said mean things to them. It’s probably the former, which is great, but with what we know about how the Trump team reacts to nasty emails (with his lawyer replying to one, “I already know where you live, I’m on you,” and, “Watch your back, bitch”), I’m guessing they didn’t miss out on taking some pleasure in the latter.