Trump Tweets That He Will “Stoop” Seattle Autonomous Zone Protesters 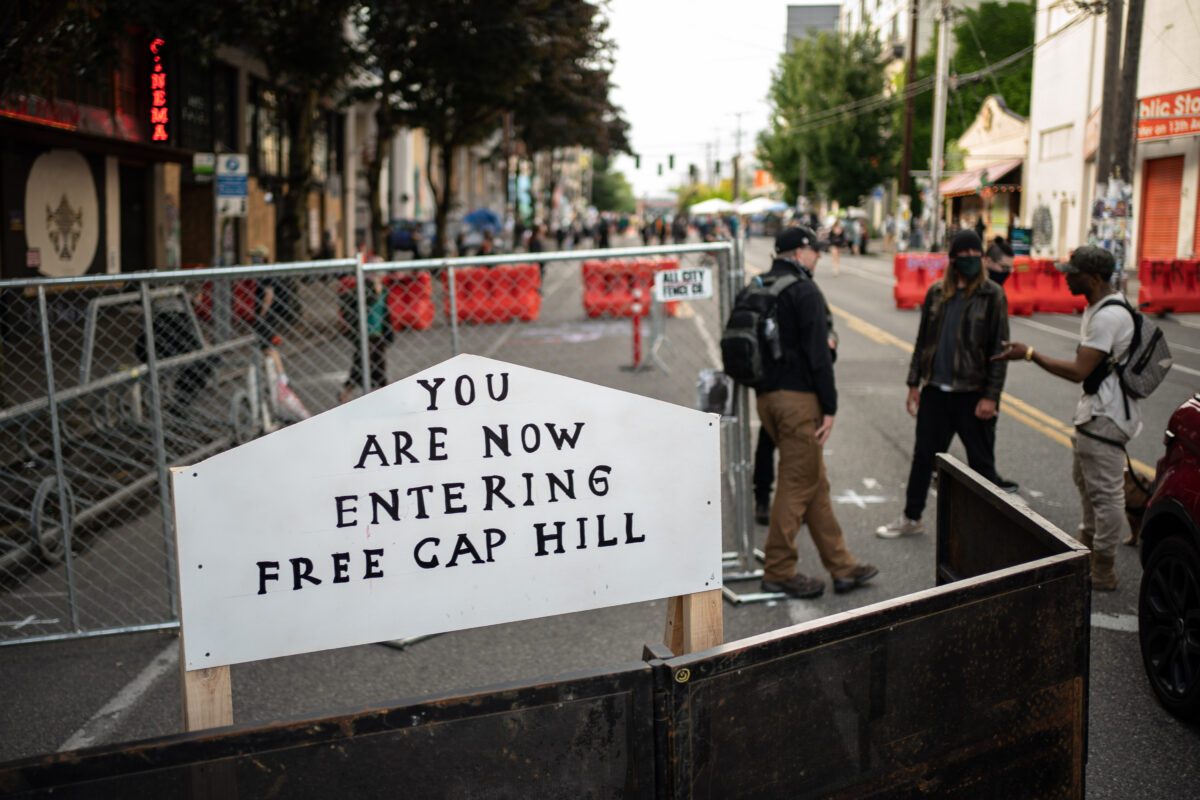 There is a lot going on in cities across the nation, but Seattle is honoring its anarchist history and going the extra mile. Or at least the extra few city blocks. Protesters in Seattle have camped out and declared a six-block area of the city the “Capitol Hill Autonomous Zone” and it’s drawn the worst kind of national attention from the usual suspects—specifically that of the commander in tweet, Donald “No time for spell checking” Trump.

Radical Left Governor @JayInslee and the Mayor of Seattle are being taunted and played at a level that our great Country has never seen before. Take back your city NOW. If you don’t do it, I will. This is not a game. These ugly Anarchists must be stooped IMMEDIATELY. MOVE FAST!

He stoops to conquer, I guess?

The area Trump wants to …invade (?) has been nicknamed “CHAZ” and was formed when the Seattle police opened up Pine street on Monday, expecting people to march through. Instead, they camped. They took over the emptied East Precinct Building of the Seattle PD and declared it the “Seattle People’s Department.” The protesters have set up blockades, declared the area a “police-free zone” and organized activities like a mass viewing of Ava DuVernay’s 13th.

“This is now a community center” reads one sign hanging outside the East Precinct in the #CHAZ pic.twitter.com/P77zgYUaMk

Reports from CHAZ are … varied. Police are still responding to any emergency calls in the area and have received “reports” of barricades with “some armed individuals running them as checkpoints into the neighborhood.” But the atmosphere doesn’t quite come off as an anarchist uprising.

Getting my first look at the Capitol Hill Autonomous Zone, or #CHAZ. A large group of people has gathered at 12/E Pine to listen to speakers now. Things are peaceful, someone is cooking quesadillas and there’s even a smoking section #SeattleProtests #KOMONews pic.twitter.com/ixtagKeKJ2

No, Donnie. No terrorism, just people exercising their rights

The authorities don’t seem too worried about the generally peaceful protest zone, and slapped down the president’s nonsense themselves, including the Seattle Mayor:

Make us all safe. Go back to your bunker. #BlackLivesMatter https://t.co/H3TXduhlY4

And the Washington governor:

A man who is totally incapable of governing should stay out of Washington state’s business. “Stoop” tweeting. https://t.co/O6i04qmZ9v

But it’s not all great inside CHAZ. Despite declaring themselves the “Autonomous zone” it’s not quite clear what they are autonomous from, and the leaderless movement has struggled to find a message and determine their specific mission. Of course, they want to end police brutality and eliminate the Seattle PD entirely, but how that might happen and what more they want before leaving is not clear. Many participants were part of the Occupy movement, years ago, and worry that this could similarly fall into infighting and stagnation. And Occupy also fell victim to brutal actions from the police and local authorities to clear the areas where protesters were camped.

While the CHAZ protesters want to turn their occupied police precinct into a community center and potentially use their zone as a model for a police-free Seattle, the SPD does want and intend to take back the building at some point. Whether that attempt will lead to violence remains to be seen, but for now, things are calm and there’s not really any dangerous anarchy for the President to stoop.