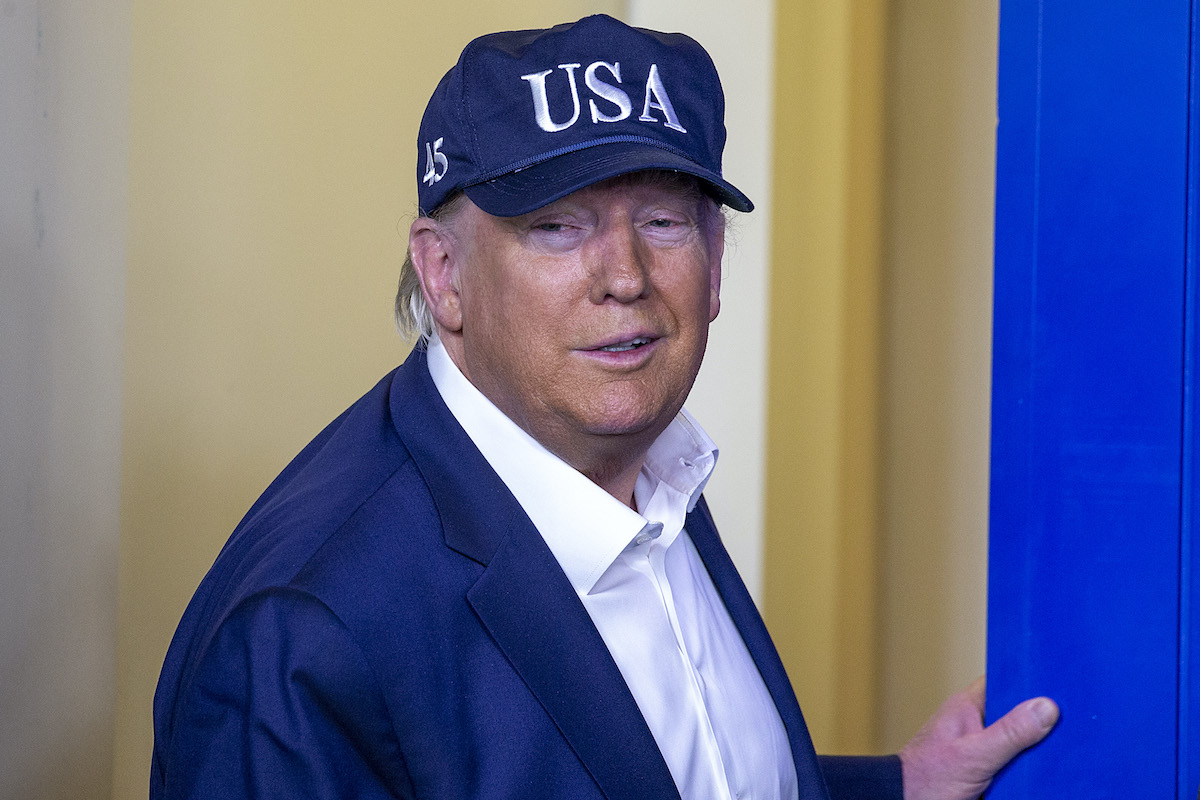 Donald Trump does not want swing states voting. In fact, he really doesn’t want anyone who might remove him from office voting in November, as the polls and politics of the nation continue to favor his likely opponent, Joe Biden. Faced with the continuing threat of coronavirus, many states are taking action to make voting by mail easier and more accessible to their population, and Trump is now directly threatening states that do so.

Here’s what went down, all on Twitter of course, because that’s the only way Trump “governs.” He first targeted Michigan for “illegally” sending out absentee ballots, and then threatens to hold up funding to the state—which he does by tagging the US Treasury, White House chief of staff and the director of the office of management and budget.

He was immediately shot down by the woman (of course) that he was targeting.

Hi! 👋🏼 I also have a name, it’s Jocelyn Benson. And we sent applications, not ballots. Just like my GOP colleagues in Iowa, Georgia, Nebraska and West Virginia. https://t.co/kBsu4nHvOy

But Trump wasn’t done. He also went after Nevada for doing the same thing.

State of Nevada “thinks” that they can send out illegal vote by mail ballots, creating a great Voter Fraud scenario for the State and the U.S. They can’t! If they do, “I think” I can hold up funds to the State. Sorry, but you must not cheat in elections. @RussVought45 @USTreasury

Now, there are … so many things wrong with all of this. The most obvious is that States control their elections, not the president. They are not doing what he says they are doing, and not doing anything illegal. Also, and we shouldn’t have to explain this, but we will: leaders cannot and should not communicate important decisions by tagging people on Twitter. But, we’re talking about Donald Trump here, President Tweety. Maybe it’s lucky this is a man who oftentimes only tweets and then doesn’t do as he’s threatening, but he sets a tenor for his MAGA crowd to follow and scream about. It’s clear he’s trying to establish that there will be “Voter Fraud” well in advance and cast doubt on the legitimacy of elections.

And let’s hope he doesn’t do as he Tweets, because threatening or cutting funding for states over their efforts to let people safely vote is INCREDIBLY BAD AND ILLEGAL AND UNCONSTITUTIONAL. The 10th amendment grants these powers to the states, and the president trying to make it harder for people to vote is coercion. It is wrong on so many levels. He’s doing the same thing to Nevada and Michigan as he tried to do to Ukraine: make funding contingent on them bending to his will, to the detriment of his political opponents.

The President is threatening to withhold funding because he’s worried that protecting voting rights will hurt his re-election chances (Ukraine all over again?). It’s un-American and unconstitutional. https://t.co/KDHJQvso6R

Putting our fury aside, why is the President targeting these two states specifically? Well, it should be obvious: they are swing states. In 2016, Donald Trump won Michigan’s 16 electoral votes by an incredibly small margin, barely 9,000 votes. Currently, Trump is polling 4.6% behind Joe Biden in Michigan. Of course, he also polled behind Hillary Clinton in that state before stealing it, which is, yes, exactly what he hopes to do again here.

However, I don’t think Trump’s strategy of insulting Michigan’s governor and other officials, and now threatening them while they face devastating floods, is the way to win voters. Which is exactly why he doesn’t want them voting.

Trump sees Michigan as a state he must win, and he’ll play dirty (again) to do it. The same is true for Nevada, which went for Clinton in 2016. The most recent poll in Nevada is from January and showed Joe Biden with a lead. Trump isn’t threatened by the possibility of states that seem secure for him, like Iowa and Georgia, allowing voting by mail, but a state like Nevada, which he’ll likely lose? Suddenly their actions to protect voters are illegal.

And also, voting by mail is the best, obvious answer to so many problems right now. It’s not a gateway to fraud. It works.

Mr. President: Oregon has been voting by mail for 22 years. We just had a great election yesterday. It was safe, secure, accessible. And we protected public health. What more do you need to know to be convinced, @realDonaldTrump?

Trump and the GOP hate vote by mail, because they don’t want people voting—it’s as simple as that. If everyone voted, they would have no power, so they benefit from voter suppression, especially in marginalized communities. It is a travesty and a literal crime, and, most horribly, just another Wednesday in the world of Donald Trump.