Why are they so bad at this?! 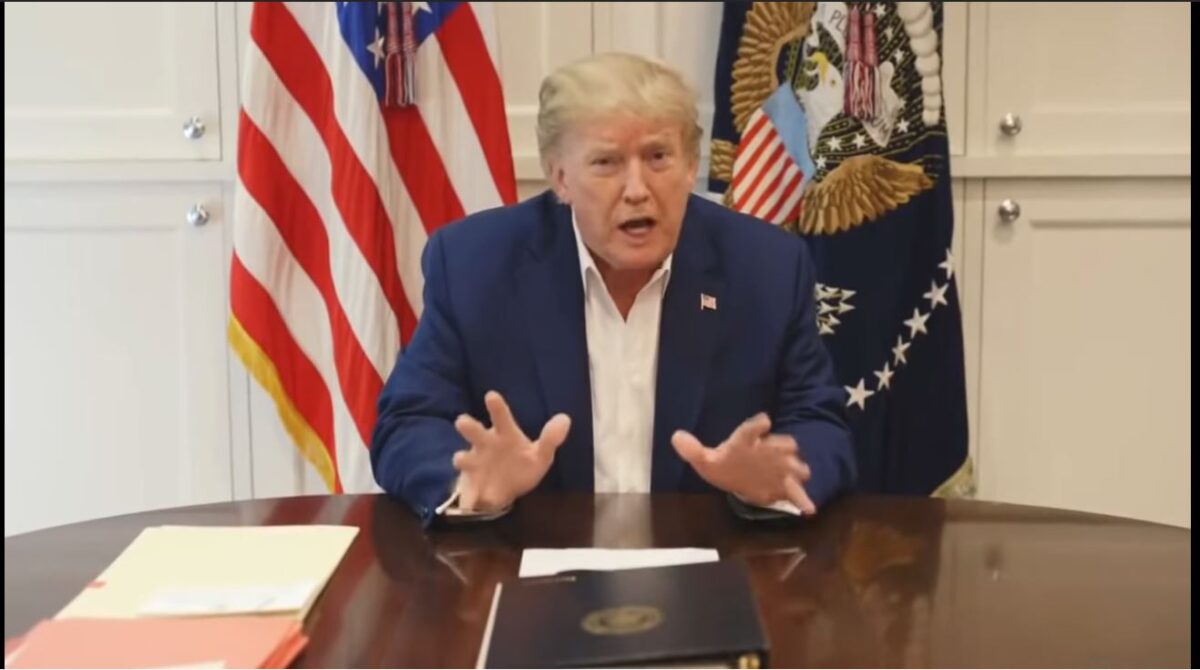 Since his arrival at Walter Reed Medical Center on Friday, President Donald Trump’s COVID-19 diagnosis has been a matter of much scrutiny and debate. His doctors have taken a cue from the Trump administration, delivering confusing and misleading press conferences that contradict reports from within the White House.

In an effort to reassure the public, the White House released photos of Trump working at his desk in the presidential suite at Walter Reed. In the photos, a serious-looking Trump pours over documents on his desk, signing paperwork. His children retweeted the photos, lavishing their father with praise:

Nothing can stop him from working for the American people. RELENTLESS! 🇺🇸 pic.twitter.com/2ZSat782qe

But like all things in Trumpworld, these photos are fakes, and unconvincing fakes at that. When you zoom in on the photos, it appears that Trump is simply signing his name with a Sharpie on a blank piece of paper:

BREAKING: The White House releases photos supposedly showing Trump working from Walter Reed Medical Center. As you can see, however, the President is merely signing a blank piece of paper with a sharpie.

We are living in North Korea. Kim Jong Un would be proud. pic.twitter.com/BC3NWK9WFp

Here's what appears to be the same blank sheet of paper in a screen grab from the video of @realDonaldTrump released by the White House earlier today. pic.twitter.com/GBOzvFxXek

Even more damning is the EXIF data and time stamps on the pictures, which reveal that the photos were taken ten minutes apart:

The photos released by the WH tonight of the president working at Walter Reed were taken 10 minutes apart at 5:25:59 pm and 5:35:40 pm ET Saturday, according to the EXIF data embedded in both @AP wire postings that were shared by the White House this evening. pic.twitter.com/EzeqIkGdf7

Of course, this behavior is signature Trump: from empty boxes to empty files to his beloved Sharpie, this has all the hallmarks of a classic Trump scam. The only thing missing a phone call from a Dr. John Barron.

So why would Trump lie? I mean, why do fish swim/birds fly, etc. But what is he hiding? Is he sicker than he would have us believe? After all, Trump hates looking weak and feeble. Is this his way to drum up sympathy? Probably. Conspiracy theories abound that Trump is faking his COVID-19 diagnosis. And while the relentless lying of this administration means anything is possible, Occam’s Razor suggests that he is likely infected due to his reckless behavior and refusal to wear a mask.

Still, it’s laughable that the White House, after 4 years, is still SO BAD at this! Did they honestly think people wouldn’t zoom in on the photo? Do they believe the public is as feckless as they are? The sheer incompetence boggles the mind. We’d have to laugh, if we weren’t so terrified over the state of our nation. Okay fine, we’ll laugh a little bit.

I can't decide what's funnier: having the president sign a blank piece of paper with a giant Sharpie like a child, or sending the photos with the EXIF data that shows they were staged and taken 10 minutes apart: https://t.co/RROmRqBUZs

Staged photos but forgot to change the EXIF metadata. I’ve seen this a lot at work with PPTXs, PDFs, etc. Dates and authors names not changed. Word literally has a feature that preps for publish. Gotta set “copyright only” when exporting in Lightroom. 🤦 https://t.co/ga79Y5S0xf

Not only is Trump signing blank pieces of paper, EXIF metadata shows the pictures were taken 10 min apart. They’re literally putting costumes on him and moving him to a different room. Everything about this administration is a fraud. https://t.co/7AVXUP9ZuC

Here I am on Sunday morning, absolutely up to my ass in blank pieces of paper to sign with a Sharpie alone at a desk. I guess I'm just a workaholic.