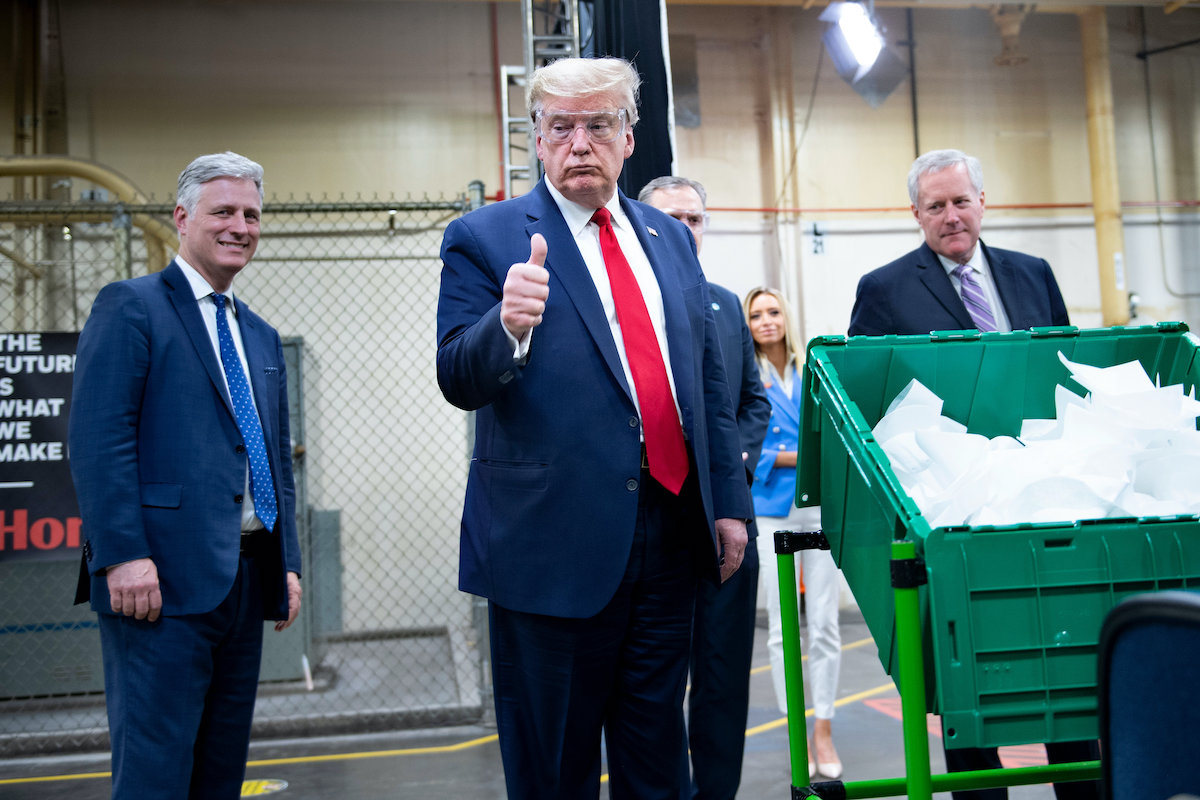 Throughout the growing coronavirus pandemic, Donald Trump has acted callously. He set up daily press briefings, it seems, just to be able to spend hours at a time praising himself, attacking Democrats and the media, and pushing untested medications. The Washington Post noted that in the first three weeks of those briefings, Trump spoke for more than 13 hours, during which time only 4 1/2 minutes were spent talking about the victims of the coronavirus and offering them sympathy.

So it’s not like we were expecting an outpouring of compassion from Trump as he toured an N-95 mask facility in Arizona Tuesday. But what we got is … you know what, you have to just watch for yourself.

This really isn’t the track you want to come on at this point pic.twitter.com/DaBQ2zsXIx

Yes, that’s Donald Trump touring a mask facility while not wearing a mask (despite saying he would) while Guns N’ Roses’ version of “Live and Let Die” blares over the speakers. It’s hard to believe the video is real, and yet it is.

They are also, somewhat inappropriately, blasting ‘Live and let die’ over the factory sound system pic.twitter.com/A11qkUla2F

We don’t know whose decision it was to play the song. Was someone at that facility sending a sly message to Trump? Was it a total coincidence? Did Trump’s team pick the playlist? Multiple outlets have noted that the music playing during Trump’s tour resembled his campaign rally playlist, but it’s not clear if that’s because they were playing an actual rally playlist or because Trump’s playlists are just deliberately curated to sound like what you’d expect to hear walking on a red state factory floor.

“Live and Let Die” is one of the songs on what is believed to be Trump’s official rally playlist, so either explanation could apply, though either way, someone dropped the ball on recognizing the optics on this moment in advance or at least while it was happening.

I can think of no better metaphor for this presidency than Donald Trump not wearing a face mask to a face mask factory while the song “Live and Let Die” blares in the background. pic.twitter.com/mJzU1HW7HA

Since we don’t have any official answers, I’m going to choose to believe that this was not a slip-up and that someone at that factory wanted to let Trump know what they think of the way he’s handling this pandemic.

I’m sorry, but I just wasn’t expecting this to be the day Trump went to a mask factory without a mask to touch all the masks while “Live and Let Die” blasts over the loudspeaker. https://t.co/UdfuvculCm

Somehow this is not Veep, this is real life. https://t.co/rW7komigQv