And they say women are too emotional to be president?! 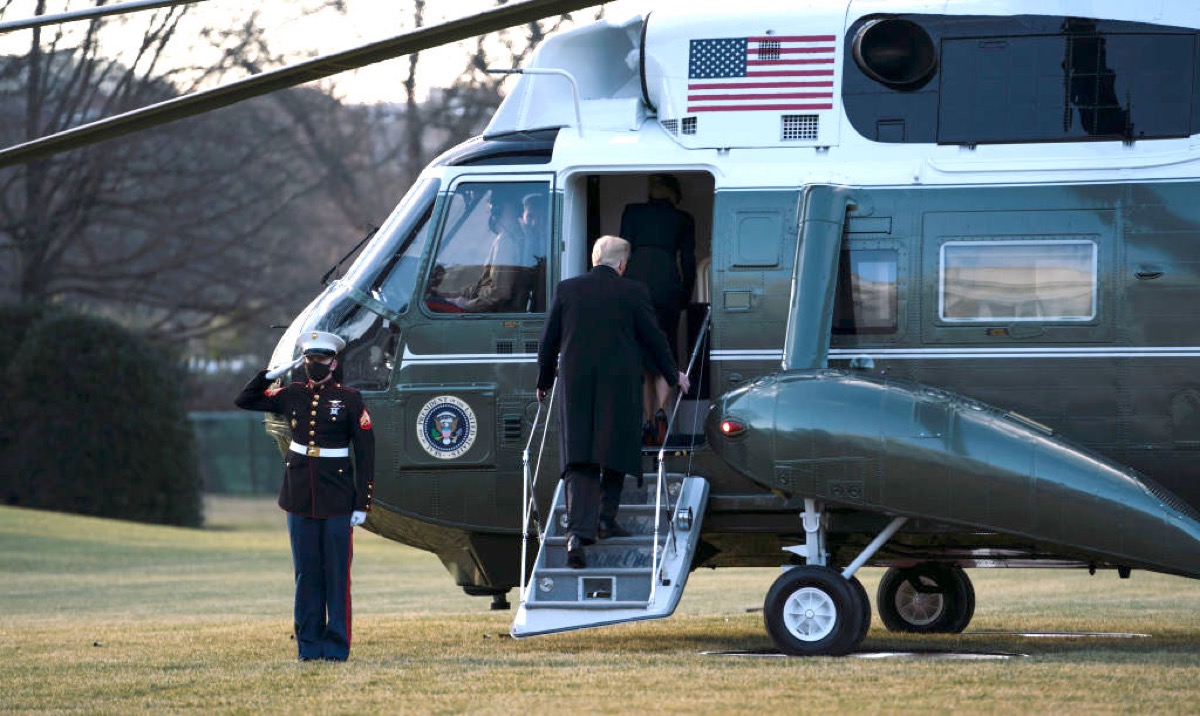 Early this morning, outgoing president Donald Trump slunk out of Washington, DC in a military sendoff at Maryland’s Joint Base Andrews. Senate Majority Leader Mitch McConnell, House Minority Leader Kevin McCarthy, and outgoing Vice President Mike Pence all chose to attend Joe Biden’s inauguration instead of bidding farewell to the president. With a small crowd of sycophants and military personnel, Trump left accompanied by a truly strange and overwrought playlist, which featured Elton John’s “Funeral for a Friend.” What a drama king.

“funeral for a friend” by elton john music rolling on in the background.

You just cannot make this shit up! 😂 https://t.co/KOsAol6RRh

Trump has long used John’s “Tiny Dancer” at his rallies, the deep irony of which has not gone unnoticed. And the iconic song got a final spin as he headed out. Joining these songs was “Ave Maria,” “Macho Man,” “Bille Jean,” “Fortunate Son,” and of course, “YMCA.” What a strange, puzzling hodgepodge of a playlist, for this strange, sad, and deeply terrible man.

Many took to social media to question the playlist and the peak drama of Trump’s all-too-welcome exit from the White House and (hopefully) from our collective consciousness.

Elton John upon hearing that Funeral for a Friend and Tiny Dancer were both used at Trump’s send off pic.twitter.com/ReXpGv34Cu

Them: We can’t have a woman be president because they’re too dramatic.

Trump: Play “Funeral for a Friend” by Elton John as I leave the White House.

Kraft Dinner Palpatine really made them roll out a red carpet for his grotesque exit.

Billie Jean, fortunate son, funeral for a friend and Gloria. Like a 40th birthday party

ahhaha am i the only one who thinks it’s weird they’re playing “funeral for a friend” by elton john 🤣 i swear trump’s music people have been trolling him since day one https://t.co/436m0VfV9c

Funeral for a friend seams on point.

Melania is dressed for the part

GTFO, I hope you have enough bubble wrap left over to wrap your fragile ego. #InaugurationDay #inaguration2021 pic.twitter.com/7ZUilk5yR9

“Funeral for a Friend” seems appropriate. Well, minus the friend part.

Thus ends the ignoble Trump era, not with a bang but with a whimper, not with a farewell, but with a “get out.” We can finally breathe again. Hey, is there a song called “funeral for a monster who tried to destroy the country”? It’s time for a new song in our hearts, and it’s a new day for hope, recovery, and relief.