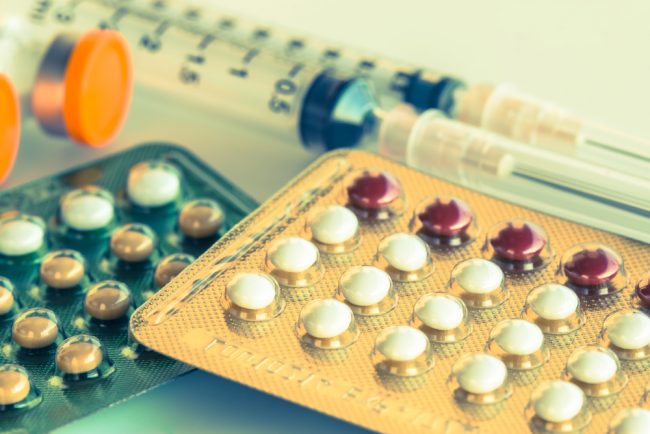 This week, the House passed the White House-endorsed “Pain-Capable Unborn Child Act,” a bill that would imprison people who provide and have (or attempt to provide and have) 20-week abortions (which are, FYI, safe and perfectly legal according to Roe v. Wade) for up to five years. The bill, like previous incarnations of it, is hopefully dead-on-arrival in the Senate, but it’s garnered mass attention nonetheless just because of how horrifying it is.

Feel free to read more about H.R. 36, but here’s everything else you may have missed, from the Trump administration’s latest, biggest attack on women’s health to a new ACLU lawsuit:

We’ve been hearing about this pretty much since the day after Trump won the presidency, but finally, on Friday, the Trump administration announced a rollback on the Obama-era contraceptive mandate that requires health insurance plans offered by employers to cover birth control. The mandate currently allows over 55 million women have access to birth control without co-payments. The mandate dramatically reduced women’s costs of living, helping to open up the economy and equalize the playing field in education and the workforce. And as a result of American women’s widened access to birth control, research has shown that women’s living standards have substantially improved — progress that could be reversed with a rollback on the mandate.

Predictably enough, the rollback is justified by citing — you guessed it! — a delightfully discriminatory interpretation of the First Amendment that allows Christian employers (or anyone with moral opposition to birth control, aka sexists everywhere) to impose their religious and/or personal values on female employees and deny them access to basic women’s health care.

“We should have space for organizations to live out their religious identity and not face discrimination,” Roger Severino, director of the Department of Health and Human Services’s Office of Civil Rights, told NPR.

But the Department of Health and Human Services takes things even further by adding that the mandate has promoted “risky sexual behavior” among teens and young adults. In recent years, national teen pregnancy rates have dipped not as a result of less sex, but wider access to reliable contraception and sexual education. In contrast, regions with less access to these resources have higher rates of teen pregnancy.

The ACLU is suing to make medication abortion more accessible

Medication abortion is safe and being used more and more, and yet a number of FDA requirements continue to limit the abortion pill’s accessibility. In the many, many states with deficiencies in clinics offering surgical abortion services, these restrictions on medication abortion are not only burdensome, but according to a new ACLU lawsuit announced Tuesday, they could also delay or cut off abortion access entirely.

The ACLU’s new lawsuit challenges FDA restrictions that prohibit medication abortion from being distributed in pharmacies and require it to be distributed only in clinics, medical offices and hospitals. Currently, the restrictions in place are justified because of the FDA’s Risk Evaluation and Mitigation Strategy, or REMS, policy, which states that the administration can only impose certain regulations on a drug “to ensure that a drug’s benefits outweigh its risks.” But as the ACLU points out, study after study proves the safety of medication abortion.

“The FDA’s unique restrictions on medication abortion are not grounded in science — this is just abortion stigma made law,” Julia Kaye, staff attorney with the ACLU Reproductive Freedom Project, said in the ACLU’s statement.

The past few weeks have been turbulent for reproductive rights in Missouri, but a Monday decision by the 8th Circuit Court of Appeals finally has things moving in the right direction. The court rejected Missouri’s Sept. 21 stay motion blocking Planned Parenthood clinics in Springfield, Columbia and Joplin from getting their abortion licenses back.

In 2012, the state of Missouri imposed a number of TRAP (targeted regulation of abortion providers) laws — such as requirements for abortion providers to have hospital admitting privileges, among other requirements that were medically unnecessary and too expensive for most clinics, with their limited finances, to impose. Up until the Kansas City Planned Parenthood got its license back after five years, last month, only one clinic in the whole state of Missouri offered abortion services.

“Pro-life” Congressman who pressured mistress to have abortion retires

In a tale that is seriously one for the books, a Tuesday report in the Pittsburgh Post-Gazette revealed Pennsylvania Rep. Tim Murphy and member of the House Pro-Life caucus pressured a woman he had had an affair with to have an abortion. (Awkward is one way to describe the story, appallingly hypocritical are another two.) Murphy admitted to the affair earlier this year, but if Murphy was hoping his evangelical colleagues could overlook this like they did, his affair, boy did he have another thing coming. On Wednesday, one day after the report including text messages between Murphy and his mistress was published, Murphy retired.

In some of his texts, Murphy seemed to reveal his private tolerance with abortion rights, writing that he had “winced” reading messages his staff had published in his name about the March for Life event in January and that he “told staff don’t write any more.”

Aside from being one of the greatest stories of irony and political destruction in our nation’s history, it also blew open an important truth about the “pro-life” movement: It’s inherently one of political selfishness, existing either to advance one’s personal ideology or a facade of moral superiority at the expense of millions of women. And in Murphy’s case, it was very much the latter.