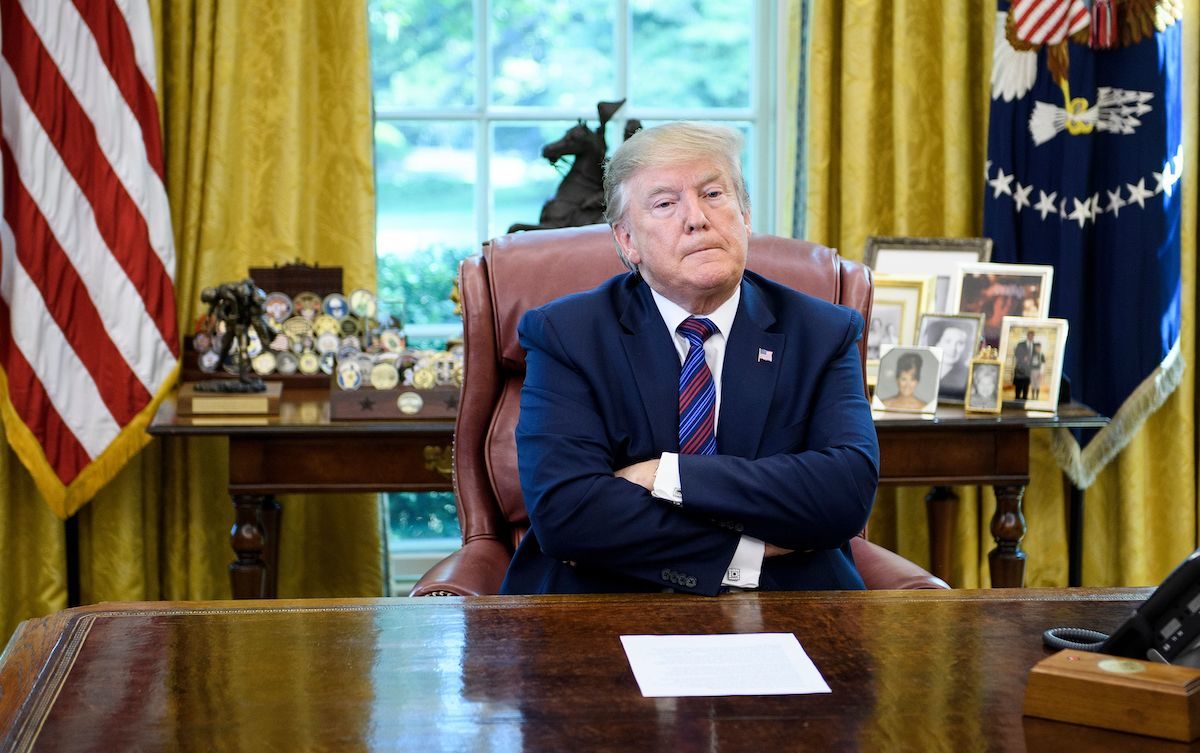 Donald Trump has famously broken with presidential tradition and reportedly refuses to read his daily briefings–the lengthy document breaking down foreign policy and national security issues prepared for the president every day before dawn. Instead, he has insisted that a distilled version of the classified information be read aloud to him, augmented with charts and videos and, as secretary of state Mike Pompeo once put it, “killer graphics.” When he does receive a written brief, they’re reportedly only about three pages long (compared to 12 or 14 during Barack Obama’s time in the White House), and incredibly dumbed down.

All of that is to say that it’s not exactly surprising to hear that Trump is suspicious of books.

During a recent rant from the Oval Office, Trump was on his regular beat of “BuT wHat AbOuT tHe DeMoCraTs???” But this diatribe didn’t have the usual fervor we see when he yells at a rally or all-caps tweets about wanting to investigate Hillary Clinton or Obama or any number of other Democrats. Instead, he seemed to be going through the motions, listlessly criticizing Obama for random things like ruining the air conditioning system in the White House (“It was so good before they did the [new AC] system. Now that they did this system, it’s freezing or hot.”) and suggesting that Republicans “look into what happened with the last Democrat president,” although not even he seems to know exactly what they should be looking for.

“Let’s look into Obama the way they’ve looked at me,” Trump said. “They could look into the book deal that President Obama made. Let’s subpoena all of his records.”

Trump is now openly threatening to investigate Obama: “We want to find out what happened with the last Democrat president. Let’s look into Obama the way they’ve looked at me … they could look into the book deal that President Obama made. Let’s subpoena all of his records.” pic.twitter.com/uDO0kL9QfA

When the Obamas left the White House, Barack and Michelle received a reported combined advance of $65 million for their memoirs–a historic amount but one that was clearly deserved since Michelle Obama’s Becoming was the best-selling hardcover book of 2018 and was on track to become the best-selling memoir of all time. (I’m not sure if it actually passed that threshold.)

It’s not clear what exactly Trump thinks Republicans might find if they were to “look into” that deal. That Michelle Obama is a brilliant writer and people are are interested in what she and her husband have to say? I do understand how that could be a confusing concept for him.

Trump says that the only reason why President Obama wasn’t investigated in the same way Trump has been is that the Republicans are “gentlemen” (“and women,” he added stiltedly after a second). Could the real reason have been that Obama never provided a whiff of scandal during their time in the White House? That he didn’t spend his time in office hiding shady campaign dealings, hiring his unqualified relatives into senior positions, encouraging foreign powers to interfere with elections, and ordering his staff to obstruct investigations into all of these things?

No, clearly the Republicans are just too polite. That’s the problem.