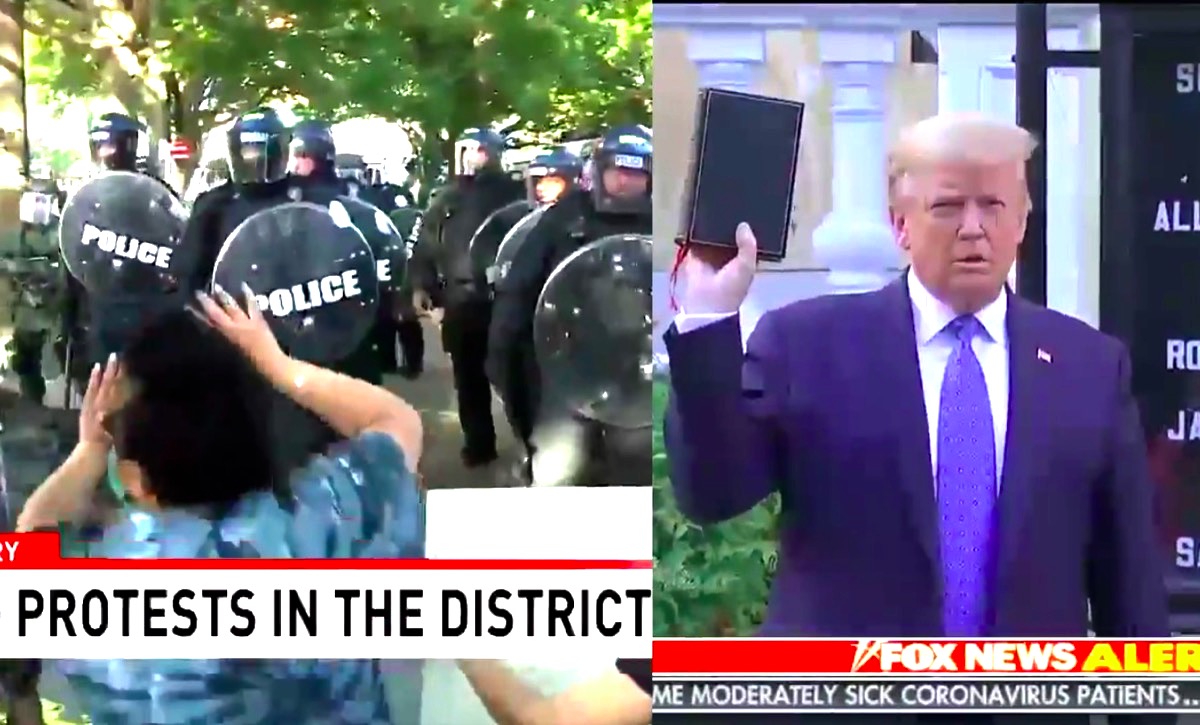 Yesterday, amid nationwide protests over racist police brutality following the killing of George Floyd, Donald Trump continued his usual dictatorial tendencies by threatening to use the military to stifle the protests. That was bad on its own, but as curfews went into place around the country, he took things a step further by having peaceful protestors teargassed and forcibly removed so he could try to seem like a brave leader.

Seriously, that was the entire reason for the use of force. No one bought it. Immediately, despite how the White House would later try to make it look, word got out about what was done to clear Trump’s path to walk out the front door of the White House and over to St. John’s Episcopal Church, where he … awkwardly held up a bible (allegedly) that he would pointedly tell a reporter was “a bible” rather than his bible.

As police moved on the protestors—and bystanders including clergy—they announced that Washington D.C.’s curfew was going into place, though the timing on that was still early. Like the rest of us, Anderson Cooper wasn’t having it, and made his thoughts on Trump’s motivations for his heinous actions extremely clear:

This unnecessary, state-sponsored police escalation came just moments before Trump would claim to be “an ally of all peaceful protestors,” though he’s made it all too clear how he feels about Black Lives Matters protestors in the past:

From the archives: At a 2015 Trump rally in Birmingham, a black protester shouted “Black lives matter” and was attacked by white rally goers. Trump responded: “Maybe he should have been roughed up, because it was absolutely disgusting what he was doing.” https://t.co/DGCAhNAvB8

And, of course, there was his fury over Colin Kaepernick and other football players taking a knee during the national anthem at NFL games, when he said they should “get that son of a bitch off the field.” He’s patient zero for people who demand that activists protest peacefully but then also find reasons why all of the peaceful protests are inappropriate, too. (Surprise: The real reason is they just don’t want to hear protestors at all!)

Of course, today, the White House has followed through with their plans for the photo-op of Trump strutting out of the front of the White House and over to the church like he didn’t have a militarized police force clear the way for him, releasing a propaganda video that has been roundly mocked and placed alongside footage of what really happened.

I put the videos of police clearing out Lafayette Square and Trump’s photo op side by side. pic.twitter.com/t08Wul5YP7

Of course, the usual suspects—Trump’s Republican allies—committed to the act and tried to pretend it was a true display of courage, just making themselves look ridiculous as they feebly try to convince anyone of their nonsense alternate reality:

Hard to imagine any other @POTUS having the guts to walk out of the White House like this: @realDonaldTrump pic.twitter.com/R9Da6W7Hhb

But it seems Trump is having a hard time projecting his desired image of success here:

all adults
20% excellent/good
54% only fair/poor

Even the Episcopal bishop of Washington was “outraged” (as were other religious leaders), saying, “Everything he has said and done is to inflame violence. We need moral leadership, and he’s done everything to divide us.”

But while pundits debated last night whether Trump could actually make good on his threat to crack down with the military, and Pentagon officials were Very Concerned, military helicopters were used to disperse protestors who were out past the city’s curfew. Of course, Washington wasn’t the only place where curfews were used as an excuse to attack protestors, either.

this is what the curfew here accomplished last night: gave justification for arresting people trying to continue doing exactly what they were doing earlier in the day pic.twitter.com/YYq1d1Qcko

Philly mayor Jim Kenney released a disgraceful statement on today’s entrapment of protesters. “Concerned about the safety of protesters” so your cops GASSED US in a location that was BARRED and FENCED? Then LIED about events that happened? This is gaslighting. Resign. pic.twitter.com/xaURrNFODz

There are now two all white armed vigilante groups roaming Fishtown with the blessing of the @phillypolice pic.twitter.com/csGWCDZ6Nw

this is just insane: there’s a curfew in philly right now, and there’s a gang of white people with bats and other weapons roving around fishtown. the police kindly asked them to disperse and then arrested a black person who had a bat thrown at him. pic.twitter.com/3JaipH1VVq

sooo just to recap today, Philly police switched their scanner to a private channel, trapped protestors on the highway and tear gassed them repeatedly, then protected/possibly helped organize a roving band of white supremacist Fishtown men with bats

How early does a curfew have to start to just a ban on protesting, anyway?

The fact that Los Angeles imposed a 1PM curfew today to effectively ban the sit-in protest planned for 4PM is a gross infringement upon our right to peaceably assemble. Where was this curfew when hundreds were protesting the quarantine in Huntington Beach?

This is what happens when you have Trump’s secretary of defense literally thinking of protests as a battlefield:

Hm. Maybe there’s something to all this talk of an over-militarization and excessive use of force!