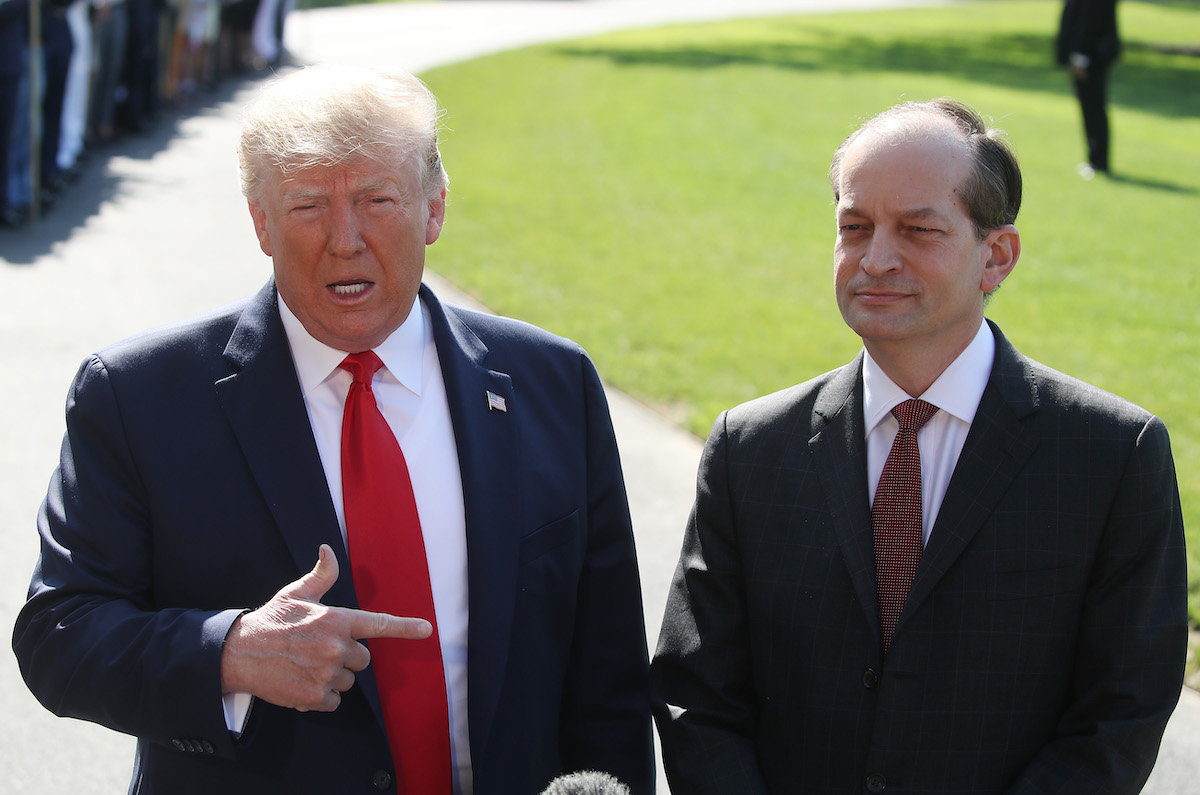 Alexander Acosta has resigned as from his position as Donald Trump’s Labor Secretary, a job he never should have had in the first place.

This came just days after Acosta held a press conference in which he defended his role in getting convicted child abuser Jeffrey Epstein a ludicrously light plea agreement back in 2007. Despite his claim to reporters that he was “not here to send any signal to the president,” the hour-long press conference seemed to essentially be a chance for him to argue publicly why Trump shouldn’t make him resign.

Acosta was pushed into doing press conference by POTUS, per ppl briefed. POTUS is following the news coverage closely. Acosta wants to defend self now but also has few fans in Mulvaney-run White House.

It didn’t go very well. He refused to offer an apology to Epstein’s victims but also, given the subject he was speaking on, couldn’t offer the sort of aggressive attacks Trump likes to see in his lackeys. So for an hour, Acosta basically said nothing.

yeah u really protected them the first time around https://t.co/wTpT45MxaH

And now he’s resigned. From a job he never should have had. Which he appears to have likely gotten only thanks to decades of power-hungry favor-trading. But the negative press over the last few days, since Epstein was arrested again and Acosta has been back in the headlines for his shady dealings, has reportedly angered Trump.

Still, he accompanied Acosta to announce the resignation to reporters today and he insisted–perhaps too heavily–that this was Acosta’s idea. “This was him, not me, because I’m with him,” Trump said. He then went on to list Acosta’s great qualities, saying, bizarrely, “He’s a tremendous talent. He’s a Hispanic man. He went to Harvard, a great student.”

Trump touting Acosta as “a Hispanic man” is peak he’s one of the good ones with a hearty dash of I can’t be racist, some of my best friends are x. It’s such a weird non-sequitur, what do you even do with that?

Trump supporters always throw tantrums over ”identity politics” but what would they call Trump being a raging racist towards the Latinx community 24/7 then throwing out “he’s a Hispanic” to try to shield a terrible cabinet hire from blowback for taking it easy on a child rapist?

Trump didn’t just praise Acosta’s character and his heritage; he also defended him against scrutiny for his role in Epstein’s deal. Even more, he offered up misinformation on why Acosta is facing criticism. “He made a deal that people were happy with and then 12 years later, they’re not happy with it,” he said, telling the press, “You’ll have to figure all of that out.”

By the “people” who were happy with that deal, Trump has to mean Jeffrey Epstein himself, because one giant reason Acosta is facing scrutiny is that, according to the findings of reporter Julie K. Brown, Acosta did not inform Epstein’s victims of the deal he proposed to the defendant, despite his legal obligation to do so. Brown spoke to Epstein’s accusers, who, as she reported last year, “believe they were betrayed by the very prosecutors who pledged to protect them.” They felt that at the time and they feel that now.

Meanwhile, twelve more women have come forward to accuse Epstein of grooming, trafficking, and rape. A hearing for his new case is scheduled for Monday.